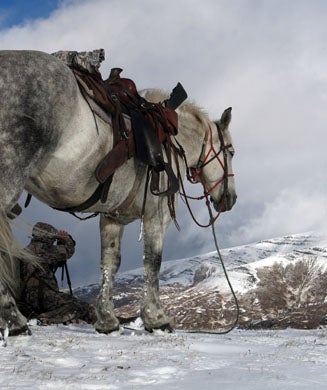 The wolf is incidental – nearly every hunter that journeys to Reg and Ray Collingwood’s (www.collingwoodbros.com) hunting camps in the Spatsizi River country gets a wolf tag just in case they encounter the wild canines. The other three tags were like Willy Wonka’s gold-foil tickets to the Chocolate Factory: precious, coveted invitations to a fantasy world of big-game hunting.

I was just as interested in hunting mountain caribou as the other species. There’s something about their profusion of branches and limbs of antlers that turns my predatory crank. Trophy bulls have over 400 inches of antler, all growing out of an elk-sized body. They look to me like a mule deer collided with a kid’s swing set. Hell, even the cows wear antlers.

As I detailed in part 1 of my BC hunt, moose was first up. I killed a whopper – a 60-inch bull on the second day of my hunt.

After spending a day butchering and packing moose, my guide, Max Gauthier, and I decided to target caribou. Problem is, the subalpine animals live on the very tops of snow-covered plateaus, and the weather disintegrated. Clouds that had hovered over the peaks for days lowered right to the valley floor, spitting snow and making glassing an exercise in futility.

We decided to ride, get above the weather, and hopefully find a herd of ‘bou. After several miles of riding through wet, whipping willow stands and soggy spruce groves, the country started opening up.

Our wrangler, Tania Millen, came with us. As you can see in the country behind her, the weather in the valley was socked in.

But the higher we rode, the more the sky lifted. Soon, we were trailing our horses in a vast empire of snow, rocks, and distant mountain peaks.

Through the sun breaks, I could see more of this country. Caribou are enigmatic animals. Outfitters have a hard time hunting them, because the animals are so unpredictable. And they live in vast, open country, always on the move. They might be on one mountain range today, but 50 miles away on another plateau the next day. We turned our horses toward this west-facing slope, covered in snow and low-slung buckbrush.

There was enough country here to glass, and I threw my pack on the snow and started picking apart the real estate with my Weaver binocular. Tania shot this picture through my horse Archie’s legs.

But here’s the other thing about mountain caribou: they are camouflaged perfectly. Their white necks and gray flanks blend in perfectly with the mix of snow and brush. There is a herd of caribou in this photo, shot through Max’s spotting scope. Can you spot them?

This is the same view, zoomed up. Now, the caribou start to reveal themselves. It’s a herd of maybe 9, with one bull. He’s not bad…

…but he’s not great, either. He has double shovels, the browtines that extend horizontally above the nose. But his tops are really weak. A trophy bull will have multiple points coming off the tops of palmated main beams. This guy has only a couple of thin sticker points up top.

Max and I decide to leave this herd and strike out across the plateau in search of another bull. I took this shot looking over my shoulder at Tania leading our packhorse. It’s exactly as cold and windy as it looks.

Even the horses are shutting down in the whipping wind and swirling snow.

We reach another viewpoint on the other side of the plateau, but the only thing we can tie our horses to is a big rock. Up here, you use any hitching post you can find.

The horses use each other as windbreaks as we climb out to a finger ridge where we can glass miles of open country.

No animals. We decide to move on again, right into the teeth of a steely wind. Max looks like a member of Robert Peary’s polar expedition, only with a horse instead of a sled dog.

Here, Max and I confer. We could ride our horses over the top of the bowl in the left of this photo, or we could start down and hope to find caribou in lower elevations.

We glass again. As hard as caribou are to find with good optics, I’m thankful for them. To hunt caribou without a binocular and spotting scope would be futile.

But even good glass can’t conjure an animal that’s not there. We see no ‘bou, and begin the long ride back to the valley floor. Our camp is in the dark green timber in the middle of this photo. The glad news is that it appears that the lower-elevation snow has stopped.

Even gladder: a cheerful fire back at our wall-tent camp. I sparked this blaze with the striker that I carried every step of the way through British Columbia: Exotac’s nanoStriker, a pen-sized fire-making tool that throws off more sparks than a Justin Bieber concert.

The next morning, we woke to a full foot of snow in the valley, and I’m guessing three feet on the plateau. We turned toward grizzly bears, and I never pursued mountain caribou again. But someday I hope to return to BC’s high plateaus, with a caribou tag in my pocket, and a good horse between my legs.