The state of Texas is home to dozens of non-native game species that have been imported from distant lands and... 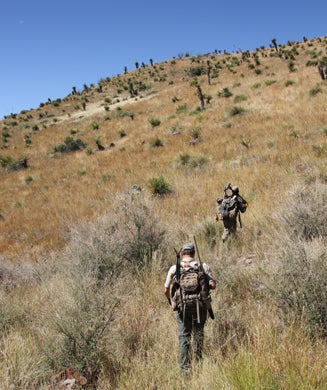 The state of Texas is home to dozens of non-native game species that have been imported from distant lands and introduced to the ranches there since the 1930s. Known collectively as “exotics,” these non-indigenous animals include scimitar-horned oryx, nilgai antelope, and axis and fallow deer to name a few.

Whether it’s deserved or not, the idea of hunting exotics on a ranch in Texas has gained something of a stigma over the years. Mention you’re going there to hunt, say, blackbuck antelope, and people will inevitably imagine you sitting in a comfortable box blind over a feeder within the confines of a high fence waiting for an animal that doesn’t belong there to show up for a meal.

But one exotic species in particular roams freely across the rugged mountains of West Texas and is every bit as challenging to hunt as nearly any of our most revered North American game. The aoudad, aka the Barbary sheep, was introduced in Texas in the late 1940s after World War II, when soldiers who had been stationed on the Barbary Coast of northern Africa recognized their potential as a game species and had some shipped to ranches in Texas. Since then, aoudad have adapted and flourished in the Lone Star State, increasing in numbers by an estimated 1,800 percent since 1963 to more than 25,000 head.

Earlier this fall, I hunted these cunning, wary sheep in the spectacular Davis Mountains with Desert Safari Outfitters.

My hunting party’s home for the week was the beautiful 104,000-acre Leoncita ranch north of the town of Alpine. That’s where Remington’s John Fink and Shooting Illustrated editor-in-chief Adam Heggenstaller started out hunting with guide Jared Aguilar. Meanwhile, Andrew Chilkiewicz, the marketing manager at Trijicon, and I travelled 2 hours to the west to hunt the 32,000-acre Gearhart Ranch outside of Fort Davis with Tate McMullan.

Tate and his wife and their infant daughter live on his in-laws’ ranch just down the road from the Gearhart, so he knows the land well, but he’s quick to dismiss any guiding credentials. “I’m no guide,” he says. “I’m just a cowboy who likes to hunt.” And one who eschews the virtues of camouflage or even earth-toned clothing. Pastel-colored western shirts, well-worn denim, and a white Stetson comprise Tate’s standard hunting outfit.

Despite the long drive from Leoncita to Gearhart, as the crow flies the two ranches are only about 30 miles apart. But over those 30 miles you gain nearly 2,000 feet of elevation. At the Gearhart Ranch we were hunting at more than 6,000 feet. It was also typically 20 degrees cooler at the Gearhart, and the terrain there is distinctly high-desert with lots of cactus (see photo composite).

The Leoncita was far more lush and characterized by red, sheer-wall canyons (as you can see in the composite above).

As is the case with any ranch hunting in the West, if you’re not using a vehicle of some sort to cover ground, you’re only going to see a small fraction of the available terrain—and the animals it holds. Tate’s preferred mode of transportation is this dune buggy. Built around a Volkswagen Beetle chassis by a guy in nearby Fort Stockton, and outfitted with an elevated bench seat and twin gun rests, this is the ultimate Texas ranch rover. The plan of attack was to drive, park, glass, and repeat as necessary until we found a good ram to put a stalk on.

Like with all sheep hunting, your success rate with aoudad is directly proportional to the quality of your optics. Their tawny to dark-brown hide blends well with the terrain they inhabit, and while you will find some large groups of them, rams will go solo when the rut kicks in—and trying to spot a single sheep bedded in high, shadowy peaks can be overwhelming.

In terms of horn length, the accepted trophy number for aoudad is 30 inches. Since these animals aren’t hunted for their meat (when I ask Tate how it tastes, he visibly shudders and says he won’t even feed it to his dog), there’s no sense in settling for an immature ram.

My rig for this hunt was the brand-spanking-new Nesika Sporter rifle in .300 Win. Mag., topped with Trijicon’s excellent and proven Accupoint scope in a 3–9×40 configuration. Nesika is recognized by top target shooters for making some of the finest rifle actions on the planet, and this is their first full-rifle offering (look for a comprehensive review of the gun in an upcoming issue of Outdoor Life).

Trying to discern a black reticle against the dark hide of a mature aoudad ram standing in the shadows of fading light is no fun whatsoever, so the tritium-illuminated dot at the crosshair of the Accupoint provided a reassuring aiming reference.

We were eating lunch on day one of the hunt when ranch manager Chris Kirby drove up to say hello. He told us about several different bands of aoudad he’d seen while working around the ranch, including one not far from where we were that had at least two mature rams in it. After finishing our sandwiches, we motored the buggy a short distance to where we’d be able to glass the ridge where Kirby had last seen the group. Sure enough, the sheep were there on the northern end of it, 1,000 yards distant but with nothing between us and them to hide our approach. On top of that, the wind was blowing from us to them.

We drove around to the western side of the ridge so that the wind would be in our favor as we climbed up and over it to where we’d spotted the aoudad. As we eased along as quickly and silently as possible, we jumped two coveys of bobwhites about halfway up (causing us to go into collective cardiac arrest), and a little farther along we bumped three ewes that were making their way to the south along the top of the ridge. When we finally got to where we would be in position for a shot, we were pinned by yet another ewe that stood and stared at us for a few minutes before bugging out. When she did, we eased up to find that the sheep were gone. Confused about how they’d completely disappeared, and somewhat dejected, we started heading south along the top of the ridge and soon located the sheep on an outcropping a few hundred yards south of us on the eastern side of the ridge. As we went along, we were twice pinned by ewes—four at first, then two others just above the spot where we’d last seen the larger group. We sat there for 20 tense minutes as they stared and snorted at us, sure they would blow our opportunity. Eventually, Tate tired of waiting on the ewes to make a move and eased down the slope to see if the rest of the sheep were still there. He looked back in my direction and eagerly waved for me to join him.

When I got to where Tate was standing, he explained that the group was a couple hundred yards away and below us, and that there were at least two good rams in the group. I sidled up to a chest-high shelf of rock on which I placed my pack and then rested my rifle across the pack. Through the scope I could see many ewes and lambs, as well as the two rams. One was on a point looking away from us and quartered slightly to the left at 176 yards. The other was facing us almost dead-on. Tate confirmed that the one on the point was the larger ram, so I centered the faintly illuminated dot behind his shoulder and pulled the trigger. The 165-grain Barnes Vor-Tx Tipped TSX BT hit above the shoulder a bit and tore through and exited the front of his chest. He leapt from the precipice and crashed into the ground 15 feet below, stone dead.

As it turned out, the ram I shot was the first animal ever to be killed with a Nesika Sporter rifle. After snapping a few photos and caping the ram and packing him onto the buggy, we started the long journey back to Leoncita.

Tate enjoyed some local refreshment as he finished caping my ram back at camp.

And when he was done, Jared put the tape to it. The right side measured 31¼ inches, while the left side went 31¾. Judging from the growth rings on its horns, Jared estimated the ram to be an incredible 11 years old.

If I could change one thing about aoudad hunting it would be to find a better use for the meat than as coyote bait. But these are great, wily animals that live in some very unfriendly country. Hunting them requires a good deal of physical and mental toughness, and pursuing them in the craggy, beautiful mountains of west Texas is about as far from sitting in a box blind over a feeder inside a high fence as you can get.

Update
It’s always an exciting day at the office when taxidermy arrives. The aoudad skull showed up on Oct. 20, 2014, and it’s a beauty. Woodbury Taxidermy in Ingram, Texas did an impeccable job with the European mount.