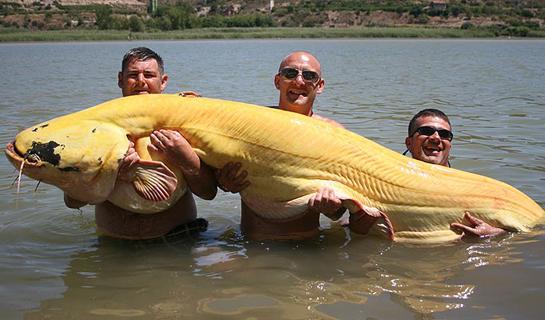 Great Britain’s The Sun newspaper reports that last week Chris Grimmer (left) landed the largest albino catfish ever (the paper cleverly nicknamed the monster Fin Kong). He caught the freak fish on the River Ebro in Spain. Who knew there was such a category? Albino catfish? Really?

Grimmer’s spooky cat was 8 feet long and weighed 194 pounds. Grimmer told reporters that his 30-minute fight with the fish “was like trying to reel in a bus. I could hardly walk afterwards, but it was worth it.”

I’m guessing he said “bus” because that catfish looks like a yellow school bus and not an albino. But then again, I didn’t know there was a category for pigment challenged fish in the first place, so what do I know?