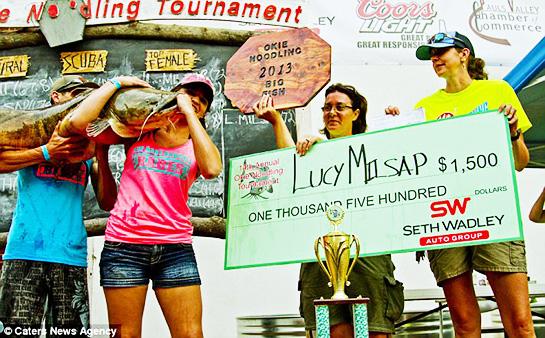 Millsap, 19, caught the fish in Lake Texoma at 3 a.m. on June 22, 2013, according to NewsOK. She then drove three hours to Wacker Park in Paul’s Valley, Okla., with the live fish in the back of her truck.

Although she has been noodling since she was five, this was her first competition.

Millsap beat out 200 competitors to take first place and $1,500 in the “Big Fish” category.

When asked if the tournament winning catfish has a name she replied, “Dinner.”

The noodling competition is the brainchild of filmmaker Bradley Beesley. He started the festival to promote his documentary “Okie Noodling.” The first festival attracted 500 people. Fourteen years later, it draws crowds of 10,000 from around the country.

“We never thought it would take off like this,” he told NewsOK. ‘It was just a device for the film.”