The Biggest Record Catfish from Around the World

Here are 15 of the biggest catfish pulled from international waters 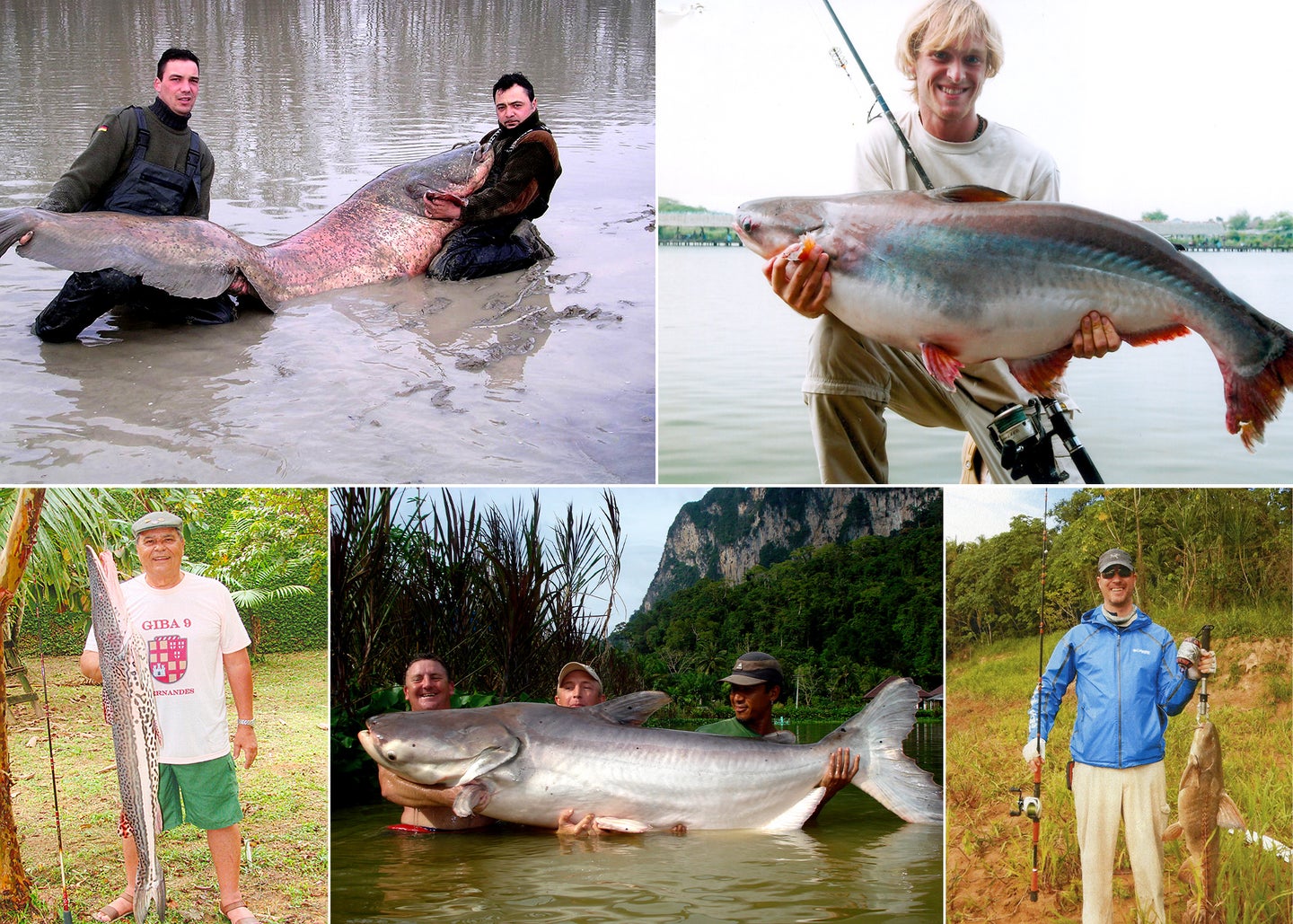 Some of the biggest catfish ever caught. IGFA
SHARE

Catfish are popular among North American anglers, but they can also be found all around the world, with two of the largest species—the Wels and the Giant Mekong—inhabiting waters in Europe and Southeast Asia. South America, and especially Brazil, is home to several unique species as well. There are more than 30 international catfish species in the world record book, as maintained by the International Gamefish Association. Here’s a look at 15 of the all-tackle world records from around the planet.

Attila Zsedely is the all-tackle world record holder for the species. He caught this massive Wels catfish from Italy’s River Po on March 12, 2010. The fish weighed 297 pounds, 9 ounces, and was 96.46 inches long. The listed equipment in the records include a Spin Blade 3m rod and a Ryobi 6000 reel lined with Berkley Whiplash. Zsedely was trolling a Rapala lure.

Martin David Kent is the IGFA’s all-tackle world record holder for Mekong giant catfish with a 260-pounder caught Nov. 29, 2010. Kent was fishing out of Gillams Fishing Resorts in Krabi, Thailand, and the catfish was 79 inches long with a 46-inch girth. He was geared up for big fish, wielding a Free Spirit Cat Tamer with a Penn 760 Live Liner reel spooled with 80-pound Berkley Whiplash line. He was bait fishing using a paste ball.

Mekong giant catfish are part of the family of “shark catfishes,” which are migratory. They are typically found in medium-to-large-sized rivers. Although they are herbivores, they are willing to take other food in captivity. The Mekong giant catfish is one of the fastest growing fishes in the world, said to be capable of reaching up to 400 pounds within six years. Unlike other large catfish in the Mekong system, these giants have no teeth and minimal, if any, barbels. International trade of the fish is banned, and it is considered an overexploited resource

Kent’s fish, while massive, is not the biggest Mekong cat ever caught. According to National Geographic, a nine-foot, 646-pound Mekong giant catfish was caught in Thailand in 20015. That fish is listed in the Guinness Book of World Records as the largest freshwater fish ever recorded.

Gilberto Fernandes holds the all-tackle world record for Redtail catfish, also known as pirarara. He also has nine line-class records for the species. This 123-pound, 7-ounce brute was 55.43 inches long with a 50-inch girth. He caught it April 3, 2010, in the Amazon River. He was bottom fishing and using a whole dead fish for bait. The gear was a Sportex fiberglass rod, a Pflueger Contender G15L reel, and 20-pound Vexter line.

The pirarara is found in the Amazon and Orinoco basins. It is a colorful species with red-orange dorsal and caudal fins. It has three sets of barbels, and the top two are very long. These fish are omnivorous, and they eat fruits as well as other fish and crabs. Their meat, while dark, is said to be excellent.

Hennie Moller is the all-tackle world record holder for the species. This 93-pound sharptooth was caught April 23, 2003, from the Orange River in Kakamas, South Africa. Moller’s catfish was 74.80 inches long with a girth of 35 inches. He was using a mudfish as bait, along with a custom rod and a Shakespeare reel spooled with 17-pound Stren line.

Sharptooth catfish are found all throughout Africa, from the Nile River to the Orange and Umtanvuna systems. They have also been introduced to Europe and Asia, including the countries of Israel, Jordan, Lebanon, Syria, and Turkey. These omnivores are hearty, adaptable fish with an accessory breathing organ that lets them live in poor or challenging conditions.

According to the IGFA, these fish can even move overland under damp conditions by “crawling” with its pectoral spines. Anything swimming, crawling, slithering, or flying that it can fit in its mouth is suitable for a meal. It is also an important food source in many cultures around the world.

Angler Gilberto Fernandes holds several all-tackle records. Over his career, he’s notched 137 records, of which 54 remain current. One of those all-tackle world records is for Gilded catfish. This 85-pound, 8-ounce specimen was caught on Nov. 15, 1986, in the Amazon River. The fish was 54.13 inches long with a 31-inch girth. His gear included an ABU 484 surf rod with an ABU Ambassadeur 8000 C reel spooled with 20-pound Trilene. He was bottom fishing with a whole, dead fish as bait.

This long-whiskered fish can be found in South America’s Amazon and Orinoco River basins, along with the major rivers of French Guiana.

Jakub Vagner is the all-tackle world record holder with a 46-pound, 15-ounce Swai catfish that he caught May 9, 2009, while fishing in Thailand’s Bung Sam Lan Lake. Vagner’s fish measured 40.94 inches long with a 28-inch girth. He was using a Daiwa Saltiga rod paired with a Shimano Baitrunner reel. The line was hefty 80-pound PowerPro. He was bottom fishing and using rice husk flour as bait.

Swai catfish are native to Southeast Asia. They are found in the Mekong and Chao Phraya rivers, and the Mae Klong River basin. The look a bit like blue or channel catfish, but they have their fewer barbels around the mouth. They are a popular aquaculture species, raised for food and sold in markets under the name “swai.” Wild stocks have generally declined since the 1980s.

The all-tackle world record Eurasian catfish was caught July 4, 1997 by angler Shoji Matsuura from Lake Biwa in Shiga, Japan. Weighing in at 37 pounds, 14 ounces, the cat measured 46.46 inches with a chunky 39-inch girth. The angler was using a Jackson rod and an Abu Garcia 6500 GR spooled with 16-pound Varivas line. He was casting a plug when the fish hit.

Gilberto Fernandes also holds the all-tackle world record for Firewood catfish. This one weighed 35 pounds, 4 ounces, and measured 50 inches long with a 24-inch girth. Fernandes caught the catfish in the Amazon River. He was using a Daiwa Firewolf rod and a Pflueger reel. The line was 11.7-pound Araty Superflex. He was bottom fishing, using a smaller catfish for bait.

Firewood catfish are one of the more interesting looking catfish species, and they are found in the Amazon and Orinoco River basins.

Anongnart Sungwichien is the all-tackle world record holder for Grey eel catfish. She caught her 18-pound, 11-ounce fish on April 2, 2002, in Thailand’s Nakorn Nayok River. The fish was 45.67 inches long with a 19-inch girth. She was using a Shakespeare Ugly Stik rod paired with a Penn Spinfisher 5500SS reel. The line was 15-pound Sufix Toplon. She caught the cat while bottom fishing with a live prawn.

Gray eel catfish are widely dispersed. They can be found in the Indo-West Pacific from the west and south coasts of India, and off Sri Lanka eastward along the coasts of Bangladesh and Myanmar. They are also native tothe Indo-Australian Archipelago and the Philippines as far as Papua New Guinea. They’re dusky-brown with a black dorsal fin tip and they sport eight long barbels.

Arthur Weston holds the all-tackle world record for Granulated catfish with an 18-pound fish caught June 21, 2018, in Bolivia’s Madidi River. Weston’s cat was 31.89 inches long with a 21-inch girth. He was bottom fishing with a custom-built rod and a Shimano reel spooled with 80-pound Seaguar line.

Granulated catfish are nocturnal predators. They members of the “thorny catfish” family that is found in South America’s Amazon and Paraná River basins as well as coastal drainages in Guyana and Suriname. They have a fairly large, sail-like dorsal fin.

Another Brazilian species, this all-tackle world record Flatwhiskered catfish weighed 16 pounds, 15 ounces and was caught by Ian-Arthur de Sulocki on Aug. 7, 2001, in the Xingu River. The fish was 38.19 inches long with a 13-inch girth. Sulocki used a Plaway rod and an Abu Garcia 9000C reel with Plaway line. He was casting a dead bicuda, a pike-like fish also native to the area.

Benchawan Thiansungnoen caught the all-tackle world record in Thailand’s Palm Tree Lagoon on Nov. 25, 2012. The fish weighed 8 pounds, 4 ounces, and it was 27 inches long with a 17-inch girth. The angler was using a Pro Kik rod with Shimano reel spooled with hefty 50-pound Fins line. She used a bread ball for bait.

Black catfish are found from Thailand to Indonesia. They like the middle of large rivers with fast flowing water, eating insects, prawns and other fish near a muddy bottom. There is a commercial market for them, and they are sold fresh in local markets.

The Amur catfish is common in Japan, where it is also commercially raised. Fumiya Okuyama holds the all-tackle record with an 8-pound, 4-ounce fish caught Nov. 15, 2013, in Tokyo’s Tama River. The cat was 28.35 inches long with a 15-inch-girth. Okuyama was using a Shimano rod with a Daiwa reel. The line was 8-pound Sunline. He caught the fish on a plug.

Besides Japan, Amur catfish are also found in waters of the Korean Peninsula, Taiwan, China and Russia. The fish’s topside is dark grey. The belly is white. It has irregular white dots on the side. It has a single pair of long maxillary barbels and a pair of mandibular barbels.

Arthur Weston holds the all-tackle world record for Yellow catfish. He caught this 2-pound, 8-ounce fish on Jan. 4, 2022, in the Uruguay River in Argentina. The cat was 14.96 inches long. Weston was using a Goofish rod, Daiwa reel and 20-pound Berkley line. He was bottom fishing with cut bait.

It’s a pretty safe bet that Russell Jensen was anticipating bigger game when he landed this all-tackle world record Mandi catfish. He was, after all, using 80-pound PowerPro line on a Shimano Calcutta Conquest reel matched with a Grandt HVY XLN70 rod. The 2-pound, 4-ounce catfish was caught Feb. 10, 2009, in the Jatapu River, a tributary of the Amazon River. The fish was 14.50 inches long. Jensen was using a piranha as bait.

The Mandi catfish is found in the Amazon, Corantijn, Essequibo, Orinoco, and Paraná River basins, as well as major rivers of the Guianas. While small, these fish pack a big wallop. They secrete toxic mucus and wounds caused by their pectoral spines are said to be extremely painful.