Chris Proctor is a very lucky man. Proctor broke the fishing record for the biggest cod ever caught in the... 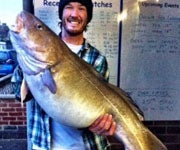 Proctor broke the fishing record for the biggest cod ever caught in the English Channel. It was his first sea fishing trip.

The 31-year-old took to the seas with a group of friends only after being goaded into it.

“I almost didn’t go on the trip because I had so much work on but the rest of the guys talked me into it – thank god they did. None of us could believe our eyes when we got it on the boat and saw it’s size. It was an amazing experience and a once in a lifetime catch,” Proctor told the Metro UK.

Proctor said he thought he had snagged a shipwreck, given the tremendous weight on his hook, but knew it was something extraordinary – and alive – once the reel screamed. The battle to land the fish took more than a half hour, and left Proctor spent and covered with bruises – the rod slammed into his stomach and midsection. The cod weighed 43 pounds 9 ounces. The previous record for the English Channel was 35-pound fish taken in 2000.

Proctor has feasted on his trophy many times since last week.

“I’ve had pan fried cod, cod in batter, a beautiful fish stew and a fish pie,” Proctor said. “I can’t tell you how much freezer space it has taken up.”

Was this really beginners luck? Or does Proctor have a successful fishing career ahead of him? And am I the only one who didn’t know that the English Channel had fish in it? I thought it was just something people swam across to get on the news.