A South African man died Saturday after being stung by a swarm of Portuguese Man o’ Wars while swimming near... 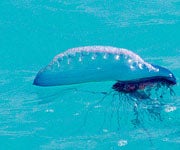 A South African man died Saturday after being stung by a swarm of Portuguese Man o’ Wars while swimming near Cape Town with his granddaughter.

Roland Singh, 58, succumbed to severe anaphylactic shock and was declared dead at the scene by paramedics who tried to resuscitate him. Although it is rare for humans to die after getting stung by these jellyfish-like creatures, also known as Blue Bottles in South Africa, it does happen.

“While the sting in itself does not cause any major effects in the human body, a sensitive individual who is prone to allergies can have an extreme reaction to the toxins in the blue bottle’s venom. An allergic reaction can lead to fever, heart and lung failure and may even lead to death, even though it is extremely rare,” Cape Town emergency spokesman Wilfred Solomons-Johannes told The Mail.

It is unknown how many times Singh was stung before his death.

Portuguese Man o’ Wars are commonly found in warm ocean waters and their range has expanded expeditiously in the past few years as a result of rising global temperatures.