Liam Neeson Eats a Wolf For New Movie, The Grey

“A few guys did upchuck. We all knew what we were eating. All I can say is it was very... 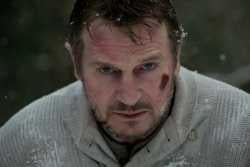 “A few guys did upchuck. We all knew what we were eating. All I can say is it was very game-y,” is how actor Liam Neeson described eating wolf meat for his new survival movie The Grey. Yes, Neeson and his castmates ate wolf.

In order to better prepare his actors for a scene in which they would be eating wolf, The Grey director Joe Carnahan had his actors actually eat wolf. The wolf was obtained from Smithers, British Columbia (where the movie was filmed). Trapper Dick McDiarmid who also provided wolf carcasses for the movie, donated the wolves. It’s legal to hunt and trap wolves in British Columbia.

The 67-year-old McDiarmid told the Canadian news site The Province, “They wanted a couple more that they were going to try and eat.” The actors had their choice of wolf stew or barbequed wolf on the bone. The Chicago Sun-Times reports that most of the cast vomited after eating the meat but that Neeson found it pretty good. “I went up for seconds of the wolf stew,” Neeson said.

One of the actors that didn’t care for wolf was Dermot Mulrony (No news on if he yacked or not). He told of his experience with the exotic in an interview with Jimmy Kimmel. The interview was rather fun until Kimmel’s and Mulrony’s ignorance gave us the following:
Kimmel – “Do people eat wolves? Is it legal to eat a wolf?”

A fumbling Mulroney – “I can’t be certain.”

Yes, guys. You can eat wolf if you obtained the carcass legally.

Of course that doesn’t mean I plan on eating wolf anytime soon.

Would you eat wolf? And if so, do you think you’d be one to puke or go back for seconds? How long before PETA badmouths Neeson? Comment below!