Vladimir Putin’s Pike Not as Big as He Claims

Russian President Vladimir Putin recently posed for some pictures with this big pike caught on a Siberian fishing trip. Putin,... 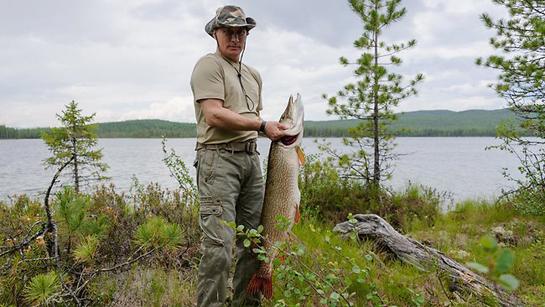 Russian President Vladimir Putin recently posed for some pictures with this big pike caught on a Siberian fishing trip.

Putin, who has become famous (or infamous) for his outdoor pursuits, claimed that the fish weighed 21 kilograms, which converts to about 46 pounds. The claim has set off a pretty interesting war of words between the pro-Kremlin media and bloggers who are Putin opponents.

“A pike that heavy just could not swim,” opposition journalist Oleg Kashin wrote on Twitter. “She would sink to the bottom! In fact this pike was made from granite.”

Komsomolskaya Pravada, the pro-Kremlin daily newspaper, had a different perspective on the Putin pike: “Many people think that catching such a trophy is a pure accident,” a fishing expert named Vitaly Maximov told the newspaper. “Be sure, it’s not by chance! You need to have the psychology of a victor and a risk-taker.”

Russian partisanship aside, it seems like Putin might have been a little overenthusiastic with his 46-pound claim. The man stands only 5′ 7″ so being generous, let’s say his fish measured 45 inches. Using the standard pike length-to-weight ratio, the fish would weigh about 26 pounds. Even if we give the president more leeway and say the pike measured 50 inches, it would still only weigh about 36 pounds.

For reference, the IGFA world-record pike weighs 55 pounds (caught by Lothar Louis in 1986 in Germany) and is pictured below. How much do you think Putin’s pike weighs? Comment below!