A hunter from Conetoe, N.C. killed this enormous wild hog after tracking the animal for a month. The huge hog... 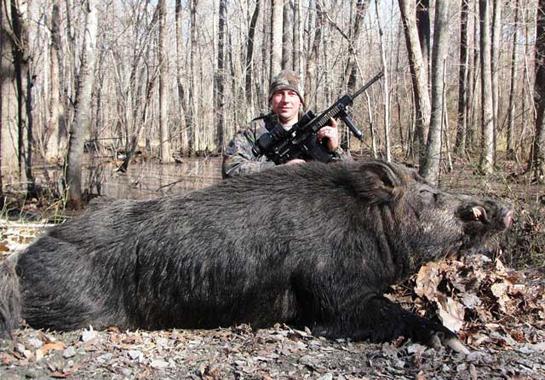 A hunter from Conetoe, N.C. killed this enormous wild hog after tracking the animal for a month. The huge hog maxed out a set of scales at 500 pounds, according to North Carolina Sportsman.

For six years the hog evaded members of the White Oak Ranch Hunting Club in the Indian Woods area of Bertie County, N.C. Hunters were aware of the hog for several years, and in 2011 game cameras started capturing photos as it roamed the 1,886-acre club.

Jeff Webb began baiting the hog a month prior to his successful hunt on Feb. 28. The boar came in to the corn bait and Webb took it with his .308 around 10:30 p.m. Webb tried to weigh the hog on a set of scales typically used for weighing tobacco bales but the boar surpassed the 500-pound limit before even making it off the ground.

“He pegged the maximum weight capacity of the certified scales with his head and shoulders still on the skinning shed floor,” club president Michael Mansell told North Carolina Sportsman. “It was a true beast.”

Webb has a history of harvesting elusive hogs. Two years ago he succeeded in killing another monster pig that took him five months to track down.