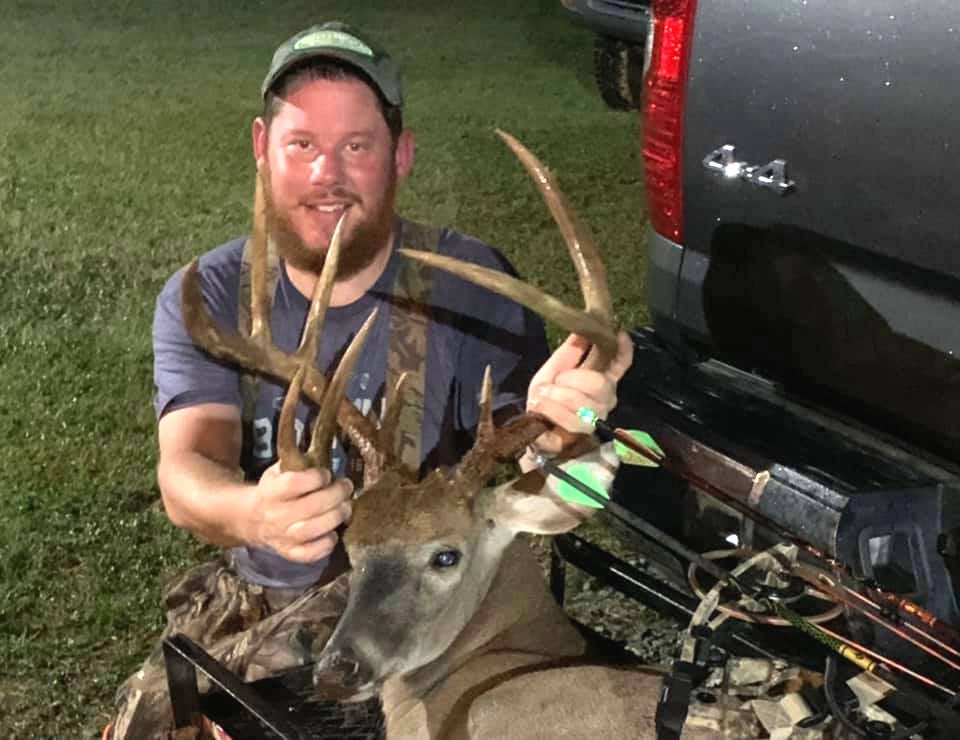 Jamie Moore of Stokesdale, N.C. had plenty of trail camera photos of a buck he nicknamed “Captain Hook.” But the three-horn, 12-point buck was inconsistent in its movements on his family-owned Person County farm.

Moore works early morning shifts and could only hunt the family property in afternoons, usually arriving to climb a ladder stand about 4:30 p.m., he told Carolina Sportsman (CS). Moore hunted the stand regularly for two weeks in September, working diligently to tag the deer before nearby corn fields were harvested that surely would change the deer’s travel patterns.

“I’ve got another shooter, an 8-point stud that I missed on opening day,” Moore told CS. “The 8-pointer showed up just about every day. But Captain Hook was coming in only two or three times a week [recorded by trail cameras].”

One mid-September evening Captain Hook appeared almost in bow range during the waning minutes of shooting light with three smaller bucks. But Moore couldn’t get a shot at the big buck before dark. He headed back home that night dejected.

But on Sept. 21. 2021, Moore climbed into his ladder stand. The weather conditions weren’t great, but with limited hunting opportunities, he decided to make a sit.

“It was a rainy day with wind blowing, and a day after the harvest moon,” Moore explained to CS. “I was expecting good [deer] movement, and sure enough around 6:15 p.m. Captain Hook was the last to come out of the thickets with two smaller deer.”

The wind was whipping and Moore thought surely the big buck would catch his scent and spook. But at 35 yards the deer stopped behind his stand, partially hidden by trees.

“I just kept my eyes on him and every time he looked away, I slowly stood up and turned 180 degrees [toward the buck],” Moore said. “Finally, I was in position to draw and he was behind some trees. All I could see was his head and half of the rack.”

Read Next: The 8 Weirdest Whitetails You’ve Ever Seen

Moore drew and waited for an open shot at the buck.

“He [Captain Hook] finally took a couple of steps out into an opening [at 28 yards], and I let the arrow fly,” he said.

The buck, which green scored at 140 3/8 inches, raced for thick cover following the shot. Moore checked where the buck stood and found his bloody arrow, and followed a good blood trail 80 yards to the dead deer.