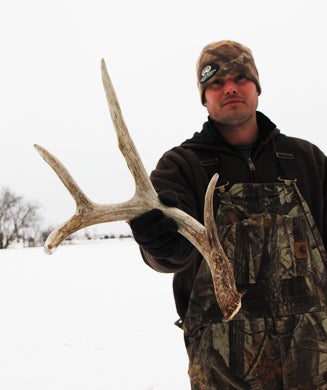 While most hunters spend their spring weekends waiting for turkey season, Aaron Milliken spends hour after hour studying Google Earth. He dedicates so much time to the virtual mapping program partly because it’s his job, but also because he knows it’s the first critical step in finding and patterning mature bucks. Milliken is a Land Specialist with Whitetail Properties (a real-estate company that deals some of the best deer hunting land in the country) and it’s his job to assess properties and predict how trophy bucks will utilize them.

Earlier this month I spent a weekend scouting and shed hunting with Milliken on his home turf in west-central Illinois. Later this year we’ll hunt the rut in this classic Midwestern whitetail country, but first we need to find the right place to hunt. Here’s what we did to get started, first with aerial scouting through Google Earth and then by putting boots on the ground.

Whether you’re looking to buy a 1,000-acre property or you’re trying to find a new piece of public land, the method is the same for analyzing habitat and terrain on Google Earth.

With any virtual mapping program, you want to start big and then narrow down your search. Begin by picking a property that is generally secluded and has plenty of sanctuary habitat, Milliken says. Look for a hunting area that has minimal human access points, includes tough terrain features, and has at least a few hidden fields, food plots, orchards or natural food sources.

Once you think you’ve found a good secluded spot, zoom back out a little and look at the surrounding properties. If there are big stretches of timber and heavy cover funneling into your property, you can bet that neighboring bucks will cruise through once the rut starts. Also, as hunting pressure ramps up, deer will travel these security corridors to get to your area (that’s why you picked a secluded spot in the first place), Milliken says. But if the area you’re looking at is isolated with hardly any surrounding cover funneling into it, you’ll have to limit your hunting pressure. The bucks living there now will likely be the only bucks you’ll have all season. If you blow them off the place on opening day, your season could be done. The mentioned property in the video above is such a place, so we’ll have to be careful with how much pressure we put on it next season.

Once you’ve analyzed the property as a whole, it’s time to pick it apart and look for details. Ridges, rivers, lakes, and fields are all easy to see on Google Earth. These terrain features create natural funnels that deer will travel through. Mark these spots as places you’ll scout on foot.

Also, try to anticipate how prevailing winds will move through the property. In many ways, wind moves like water over land features, taking the path of least resistance (but of course, you also have to factor in thermals in terrain that has significant elevation changes). Take some notes on how you think the wind will work over the property and then confirm during scouting.

One of the areas we’re looking at hunting in Illinois is located in a big-time coal-mining county. On Google Earth, you can see rows of symmetrical lines that look like short steep hills. These are grown-over spill banks from the mining days. They are now mostly covered with thick grass and cedar trees. This makes incredible bedding habitat for the deer as they can tuck below these hills and into the cedars to stay warm and protected—-but it’s also totally unhuntable. Knowing this information, we can focus on scouting funnels that run from these spill beds out to major food sources. After putting in a little time, you’ll be able to identify local terrain features like this in your area that will dictate deer movement.

Boots on the Ground

There’s no substitute for a good walk in the woods, and early spring is the best time to do it. Snow and muddy ground will clearly show deer trails, and the habitat now looks the same way it will in mid-November. Also, you won’t have to worry about scaring deer off the property since the hunting season is months away.

The easiest way to find deer sign now is to look for late-season food sources. If you’re in farm country, these main sources will obviously be high-carbohydrate crops like corn or soybeans. If you’re hunting the big woods, this means areas of new growth that contain thick, woody browse. Walk the edges of these food sources to look for sign and sheds and then follow deer trails back into likely bedding areas.

As you tromp through the woods, you’ll stumble upon plenty of rubs (they’re easy to spot this time of year). But consider this: A buck will rub a single tree just because he feels like it, so finding one rub only means that one buck was in the area at one point and he rubbed a tree. Finding a cluster of rubs doesn’t mean you’ve found big-buck hotspot either. In a fit of testosterone-fueled frustration a buck will thrash a bunch of trees and move on. But, if you are able to locate an area that has a series of large rubs from last season and holds older rubs from years back, you’ve found a good place to hang a trail camera.

It’s a good time of year to see what other hunters in your area have been up to. Most guys won’t leave stands hanging all year round, but some will. Mark these on a map or GPS. More importantly, take note of old, abandoned stand sites or walk-in trails made by other hunters. Once you find a stand site, try to predict the deer movement that motivated a hunter to build a stand there. Link enough of these old sites together and you’ll have rough-outline of the historic deer activity throughout the property.