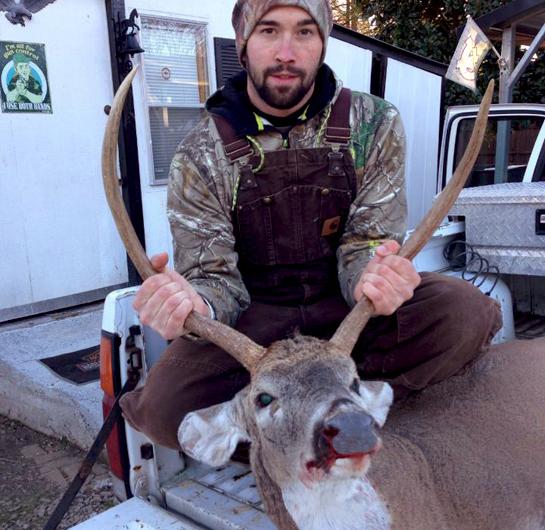 On Thanksgiving morning last year Dennie Bowman tagged a big buck just after daybreak in northern North Carolina. But Bowman quickly realized the buck wasn’t the 8-point he expected. The whitetail turned out to be a mature spike with a pair of two-foot long tines. Bluff Country Boys Outdoor TV recently posted this photo of Bowman’s bizarre buck, and we caught up with him to hear about the hunt.

Bowman, 28, set out with his uncle before dawn on Nov. 28 to hunt one of his uncle’s spots near Stoneville in Rockingham County, N.C. The pair split up and Bowman settled in his stand about 30 minutes before daylight. He chose a spot on a hill in the middle of the woods with corn and apples nearby. His uncle was hunting a spot about 100 yards away down the hill.

Bowman waited just 15 minutes before he heard something walking through the trees behind him. “I looked over my shoulder and I could see his rack coming up through the woods,” Bowman said. Although Bowman retrieved his Remington .270, the buck never gave him a shot through the branches. His uncle also spotted the buck from his own stand but encountered the same problem.

“We have a couple nice 7- or 8-pointers on the camera, and that’s what I thought it was because when I seen him he was always sideways,” Bowman said. “He never would turn around so I could see he was a spike.”

The buck browsed within 40 yards of Bowman but eventually turned around and walked down the hill. Finally the deer stopped broadside at about 80 yards to work a scrape, and Bowman saw his chance. He trained the crosshairs just behind its shoulder and squeezed the trigger.

Bowman made a clean double lung shot and the buck ran up the hill straight toward his stand. As the buck approached, Bowman finally got a good look at its antlers. “I didn’t even know he was a spike until I’d shot,” Bowman said. “It kind of tripped me out because I ain’t never seen a cowhorn that big.”

The buck ran within 10 yards of Bowman’s stand before piling up below him on the hill. Bowman waited another hour before climbing down in case other deer were in the area. Then Bowman and his uncle met up to recover the spike.

“[My uncle] is older than I am and he said he’s never seen nothing like that as long as he’s hunted,” Bowman said.

Bowman’s taxidermist estimated the buck was at least 10 to 12 years old, which could explain its unusual antlers. QDMA director of communications Lindsay Thomas Jr. said although it’s extraordinarily rare for an older buck to have spikes, it’s not unheard of.

Once a buck reaches the post-mature stage of its life and antler growth declines, strange things can happen to its antlers. That includes fewer points, abnormal points, and even a wavy quality to the bone. Thomas stressed that the “once a spike, always a spike” myth has been debunked by extensive research. The spike buck was likely an extreme example of genetic diversity among older deer.

“If he was extremely old it’s certainly understandable where he now has this strange set of long spikes,” Thomas said. “What we don’t know is what was he when he was in his prime. Chances are he was not a spike his entire life … If he was, he’s an anomaly.”

Each of the beams on Bowman’s buck measured 26 inches long, with a spread of 19 1/2 inches. The buck is certainly unusual and Bowman was thrilled with his hunt. Bowman said knowing the buck had spikes ahead of time wouldn’t have changed his decision to harvest such a unique whitetail.