A Canadian angler went above and beyond to rescue a fledgling bald eagle struggling to swim in Nanoose Bay in... 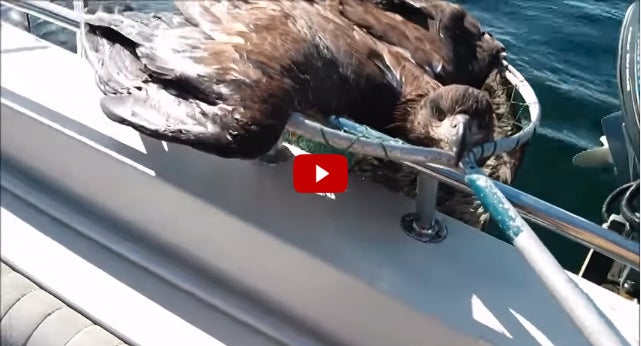 A Canadian angler went above and beyond to rescue a fledgling bald eagle struggling to swim in Nanoose Bay in British Columbia.

And it’s all on video.

The angler, known only by his YouTube account “irsrugby1,” noticed the eagle on September 20 while fishing. After determining the eagle to be incapable of safely reaching land, irsrugby1 let the bird rest on the boat (1:50 minute mark), then gently netted the eagle and brought it aboard (4:16).

It’s a long video with the angler’s thumbs periodically obscuring the lens, but the footage of the bird is pretty incredible. After drying its wings, the fledgling attempts to abandon ship (10:10). It does not go as planned.

After returning to shore, the angler took the waterlogged bird of prey to Wildlife Rescue where it was found to be malnourished. Irsrugby1states in the video that the bird will be transported to the O.W.L. refuge in Delta, BC where it will be taught to hunt before being released.

Irsrugby1 promises to update viewers on the bird’s progress.