The Ethics of Fishing for Spawning Trout

Every year, anglers argue over the morality of catching spawning trout. In areas where the streams are open for fishing, is it ethical to target fish on redds...or even to fish during the spawn at all? 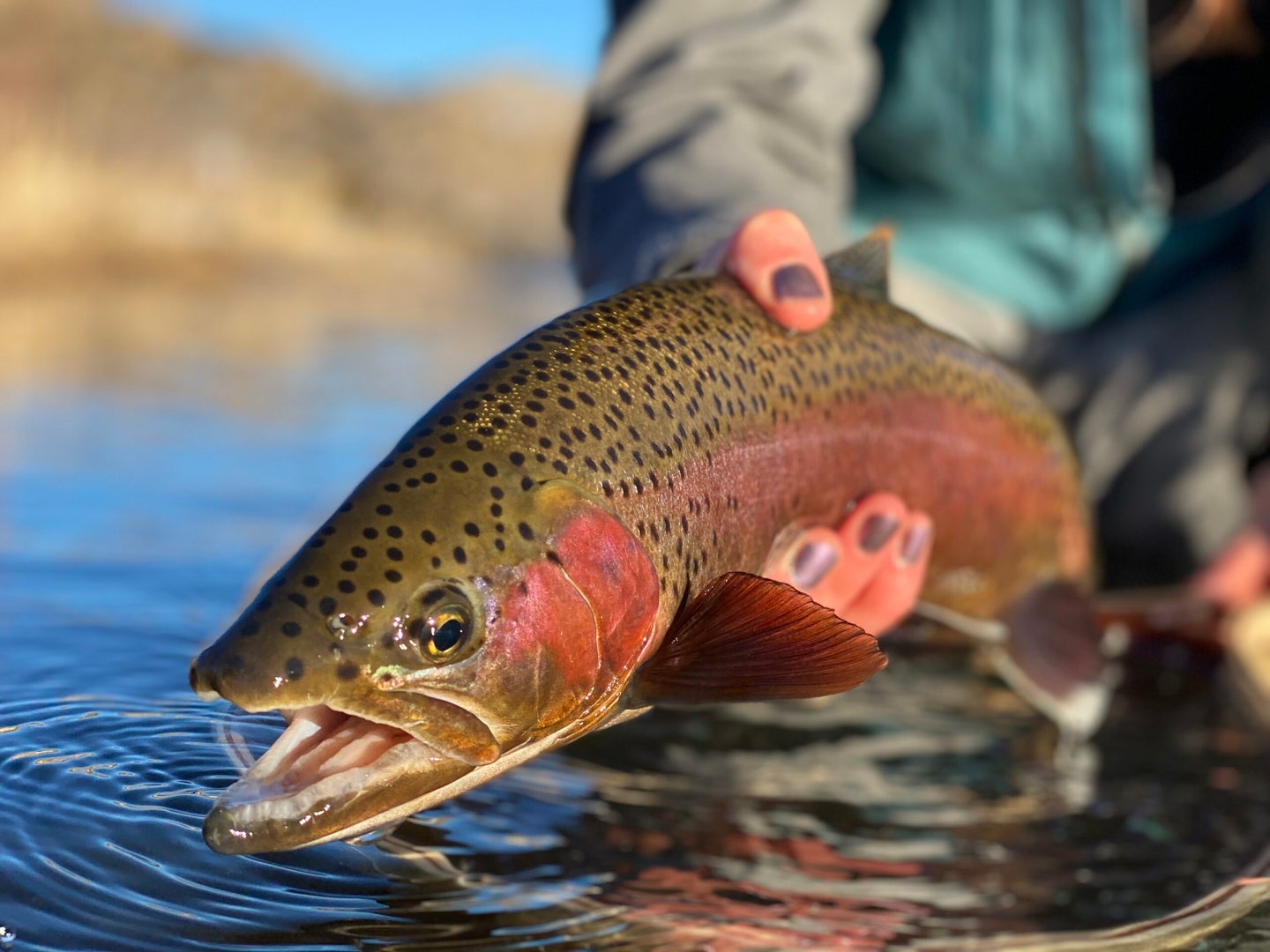 The practice of targeting trout on redds, or spawning beds, is legal in some states, but hotly debated. Courtesy of Christine Peterson
SHARE

The fly fishing world is never short on opinions about etiquette and ethics. Debates rage on the internet and riverbank about the proper way to catch and release, the necessity of pinching barbs, and the morality of fishing with a peg shoved in a bead above a hook.

All generally come from a place of concern for fish and fish populations or a sense of fair chase. And few divide the fishing community more than trying to catch spawning trout. The issue flares inevitably at some point each year—typically during the spring rainbow and steelhead spawn—when someone posts a picture of a spawned-out fish complete with bright colors. This year it was Idaho Fish and Game publishing an image on Instagram of a fisherman with a 39.25-inch catch-and-release state record steelhead caught April 11 in the South Fork of the Clearwater River. Reactions came quick, with comments ranging from the informative (“if you’re fishing the Clearwater system in April, those fish are most definitely in full spawn mode and on redds”) to the sarcastic (“thanks for redd banging natives. It really helps the population come back!”) to plenty of congrats and thumbs up.

A post shared by Idaho Fish and Game (@idahofishandgame)

Redds, for anyone wondering, are fish spawning beds. Idaho’s regional fisheries director, Joe DuPont, told the Spokesman Review that 85 percent of Idaho’s steelhead habitat is closed during the spawn, and this fish was likely a hatchery steelhead planted to be caught.

But Greg Fitz with the Wild Steelhead Coalition questions if it was, indeed, a hatchery fish, and even so, it sends a bad message to advertise steelhead fishing in the spring.

Like so many issues in the outdoors where the activity is legal and the topic nuanced, most everyone has an opinion.

Why You Shouldn’t Fish Redds

First, a primer on redds, or spawning beds. A female trout uses her tail and body to fan away silt from a portion of the river bottom, then lays thousands of eggs in the gravel over several days. Males then come along and fertilize the tiny orange orbs.

You can identify a redd from the bank, while wading, or floating, because the spawning beds are lighter than the rest of the bottom and often in shallower areas. By the end of the process, both males and females are often tired and ragged.

In many places, with struggling fish such as steelhead, fishing redds isn’t a debate. It’s illegal. Most of the spawning tributaries in states like Idaho, Washingto,n and Oregon are closed to steelhead fishing during the spawn. Break the law, you have more to worry about than opinions on social media.

Even some rivers with strong, nonnative trout populations are closed to fishing during the spawn. A section of the North Platte River in central Wyoming, famous for its trophy brown and rainbow trout, is closed in April to reduce pressure on spawning fish, says Wyoming Game and Fish biologist Matt Hahn.

But what about those areas outside the closures? Many guides, and plenty of recreational anglers, still say no.

For Fitz, it’s a matter of ethics and fair chase.

“Idaho’s steelhead enter the mouth of the Columbia in July or August and swim about 500 miles and climb 1,000 feet, and they get all the way back there and wait all winter to become sexually mature and spawn in the spring,” Fitz says. “At some point, my instinct is that we leave them alone.”

Targeting fish when they’re stationary in shallow water and in poor condition just isn’t that sporty, he adds. And with an imperiled fish like steelhead, pressure during a vulnerable time adds up.

Fishing Spawning Beds May Not Matter, But Wading Does

Every year Virginia fisheries biologist Steve Reeser fields calls from trout anglers asking for bans on fall fishing for spawning brook trout. He tells them all the same thing: He hasn’t seen evidence that fishing during the spawn hurts their populations.

“Our brook trout populations are … mostly controlled by environmental factors like stream flows,” he says. “I’ve always said, ‘Yeah, there might be a redd disrupted or a spawning fish removed from the population, but it doesn’t have a meaningful impact.’”

There are very few studies that address the effects of pulling a spawning fish off its bed, though Hahn says research has shown the impact of disturbing redds while wading.  One laboratory study by the U.S. Fish and Wildlife Service in the ‘90s showed that a single wading event through a redd could kill up to 43 percent of the eggs. Wade through that redd twice in one day? You may kill up to 96 percent of the eggs, depending on the species.

Too Many Anglers Can Cause Problems

For fisheries biologists like Hahn, it comes down less to the act of pulling a spawning fish off a redd and more about the rate at which it happens.

“If you’re worried about the population as a whole, catching a few fish off redds isn’t a big deal. Fish get picked off by ospreys or otters or get stressed out and die because it’s a stressful time. You’re always going to lose some spawning fish, and populations are resilient to that,” he says. “But that’s where the ethics come in. Is what are you more worried about an individual or a population? And there’s no clear-cut answer to that. Everyone has to decide for themselves.”

It also becomes tricky with rivers where some trout are introduced, and many spawns occur throughout the year. Between rainbow, brown, and cutthroat trout in the West, rivers could be closed for over half the year to avoid spawning fish. And even if you’re not targeting an obvious redd, says Hahn, fishing during April is fishing the spawn.

For Fitz and others worried about populations like steelhead, it’s about numbers. One or two anglers on a riverbank targeting spawners probably won’t hurt the overall population. But there aren’t one or two anglers. Anglers flock to states to fish for steelhead. Then the problem shifts: too many humans targeting too few fish.

And then add social media. Pictures like the one the Idaho Department of Fish and Game shared tells anglers that fishing for steelhead in April is acceptable, Fitz says, even if that fish was a planted hatchery fish.

“My hope is to keep rivers fishing in the long run, not just wringing it out in the short term. I don’t want this to sound self-righteous or lecturing,” Fitz says. “What I want to do is support a method that is sustainable and long-term, and we as anglers have impacts—and opportunities to do better.”