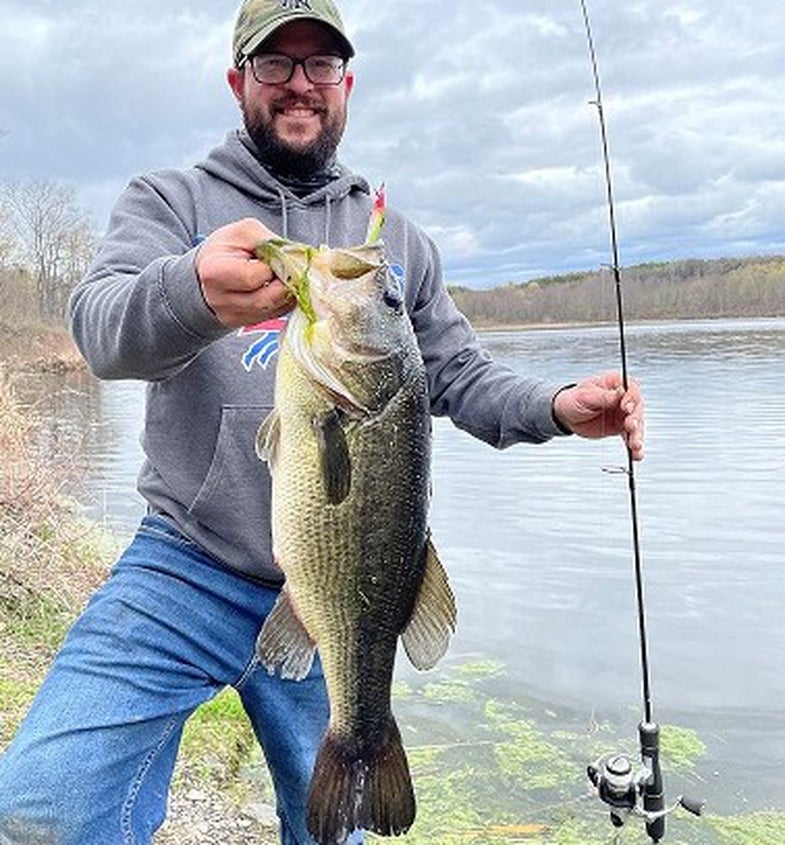 Catch-and-release is a noble angling endeavor. But release a state-record largemouth bass?

That’s the dilemma angler John Firstium faced recently while fishing with his 15-year-old son and a friend at an unnamed pond near his home in Averill Park, New York.

Firstium, 42, was targeting trout, but figured there were bass in the pond, too, so he tied on a diving red-and-white bass lure to check, according to a report from Syracuse.com.

During the afternoon, he had a solid strike using an ultralight fishing rod and only 4-pound test line. He landed the fish, a largemouth bass, measuring 27 inches long.

Cool, early-season water may have aided Firstium in hooking such a huge bass on tackle more suitable for bluegills. Heavyweight bass are more lethargic in cold water during the fight than during summer season, though it still took Firstium 10 minutes to battle the bass and boat it.

Firstium didn’t have an accurate scale to weigh the fish. And since the New York State harvest fishing season wasn’t open (only catch-and-release), he measured the bass, shot photos of it, and released it.

Read Next: The Man Trying to Bring the Largemouth Bass World Record Back to the USA

The New York largemouth bass record is an 11.4-pounder that measured 25.5 inches in length. That bass was caught 35 years ago by John Higbie from Otsego County’s Buckhorn Lake.

Firstium’s bass was 1.5 inches longer, still swollen with spawning roe, and likely weighed more. Some state-record statistical charts show bass at 27 inches weigh 12 pounds or more. But Firstium’s bass needed to have been officially weighed and measured on certified scales with witnesses to be a record fish.

“It was definitely a dream fish,” Firstium said. “I put it back in the water so it can live to get bigger.”