Doubling on Turkeys: Should You Try a Synchronized Countdown or Take One Shot at a Time?

Turkey Hunting: Nebraska Triple by OutdoorLife In the early season—when turkeys are still in big flocks—there’s a good chance that... 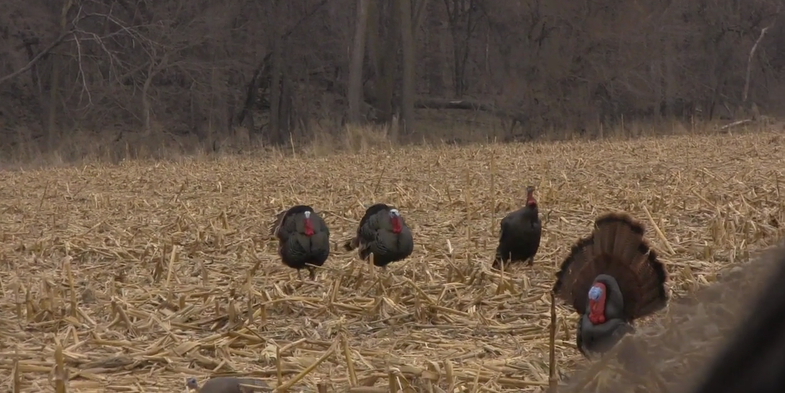 In the early season—when turkeys are still in big flocks—there’s a good chance that a handful of toms will strut into your decoy spread together.

A lot of guys hunt with a partner and the pinnacle of any spring morning in the turkey woods is doubling up on two mature toms. But, what’s the best way to kill two birds at once?

I got to thinking about this after a really cool early-season hunt in eastern Nebraska. Outdoor photographer Mitch Kezar and I had been routinely skunked going into the last morning of our trip. But we set up a blind and decoys on the edge of a big cornfield and Kezar killed a longbeard about two hours into the hunt. Soon enough, three jakes tromped into our spread and we got lucky, killing all three and punching our three remaining tags (as you can see in the video, we were pretty pumped).

Take Your Pick
One method for doubling on birds calls for the first shooter to count “1, 2, 3, BANG,” with both guys shooting on “BANG”. To be honest, I’ve never pulled this one off (or seen it done successfully, in person). I’ve heard a bunch of stories of it working, but there are even more stories about it going awry. Usually, one guy shoots too quickly. Then his buddy is caught off guard and either pulls his shot, or never gets to shoot. Sometimes the hunters can get so caught up in getting two good shots that neither one gets a shot opportunity at all.

Another method has the first shooter simply fire when he is ready. The second guy waits, watching the other birds and then kills one if they hang out after the shot (which they sometimes do) or make too slow of an escape. The thinking here is that a gobbler in hand is better than two in the bush.

So, do you and your turkey buddies set up a coordinated strike, or shoot one bird at a time?

Either way, here a couple things to consider:

1. Let the longbeards work all the way into the decoys. A strutting jake with a couple hens can be a killer setup in the early season. Besides bringing them in closer, decoys (especially the jake) will distract the birds and give you a better chance to kill two.

2. Make sure your shots are clear. The hardest part of killing two turkeys can frequently be getting a clear shot. Oftentimes toms will come into a decoy spread wing to wing and scatter together when the shooting starts. Make sure there are no hens behind the toms and that your shooting lanes are totally clear.

3. Talk it over ahead of time. You’re probably going to have some time to kill waiting on the birds, so talk through the plan. Who’s going to shoot first? Are you going to count or wait? Is it shoot on “3” or after “3”? Have a plan, and put it into action.