I’d been cruising along, filling spring turkey tags around the country, three of them on opening days in Texas, Vermont... 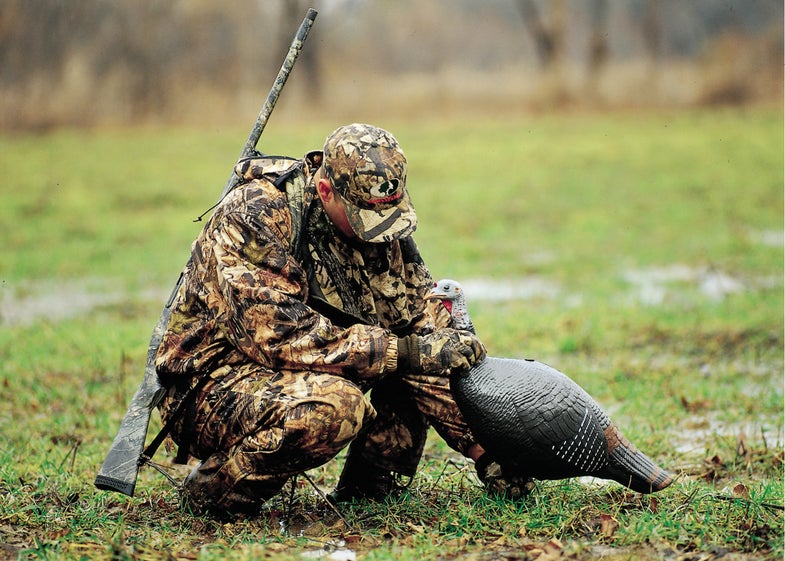 I’d been cruising along, filling spring turkey tags around the country, three of them on opening days in Texas, Vermont and Maine; my Florida bird dropped on day two. Enter New Hampshire. Time to pay some dues. On that state’s spring turkey opener, a particular vocal gobbler found three ways to beat me, coming inside range to my calls from behind me, in front of me (hidden in thick cover), and again behind me (unseen but heard), with his hen (where’d she come from?) swinging in to just several yards, even hopping onto a tree branch to check my position out. Cool stuff, for starters.

I hadn’t killed a wild turkey over a decoy all season; not in March, nor April nor early May. After that first day in NH, I started thinking it might help. The next time out, in a different location, I struck a gobbler in mid morning, worked that bird, and heard him hang up at around 80 yards in a pasture corner. Right where he could have easily seen the three hen decoys I had in front of me. That gobbler wanted the foam fakes to walk to him I guess, and it drifted off, gobbling. NH shooting hours close at noon. I left.

That afternoon, a buddy phoned, checking in the way we turkey hunters do. The same thing had happened to him in Maine that morning. Gobbler watched his decoys at 80 yards or so, then walked off. Fast forward to my most recent Friday May 15 hunt for the tough NH gobbler. After hunting a new spot and striking out to silence, I returned to the scene of the crime. I eased slowly to that pasture corner where he’d last stood. It was 8:30 a.m. or so. Straight up, the gobbler cut off my first call, 50 yards away in the woods.

This time I decided to go without the hang-up dekes. For over an hour, he hammered, moving along a dirt path roughly 50 yards away in a finger of woods between two farms, never coming in, but obviously looking my way by the sounds of it. I heard him, never saw him, and added heavy doses of silence to my clucking and yelping. When he hammered back about 60 yards away in front of me, I clucked and yelped on both a mouth and friction call. To that, I added a gobble, pumping the call hard and fast. I mouth yelped one more time, and I cut that off with another gobble. I pointed my gun in that direction, waited.

Silence. Five minutes later if that, I heard a stick snap. Heard crunching in the leaves off my left shoulder, behind me. That gobbler had slipped in. Pinned down. I was sure he’d pass into my peripheral vision, cruise by into range, and drop in the pasture corner after my gun shot. A single cluck came from that position. “Where are you?” the turkey asked. No dekes in view, I didn’t respond. I next heard that bird gobble moving far away through property I couldn’t hunt. Game over.

What would you Strut Zoners have done to kill that turkey? Do you think decoys would have helped pull that gobbler the final yards? Do you guys use dekes? Always? Never? Sometimes? What now? Do I find a fresh bird or keep after this tough NH gobbler? Season ends May 31. It’s getting personal.