Like the hen turkey in artist (and hunter) John James Audubon’s painting, this one also wore a six- or seven-inch... 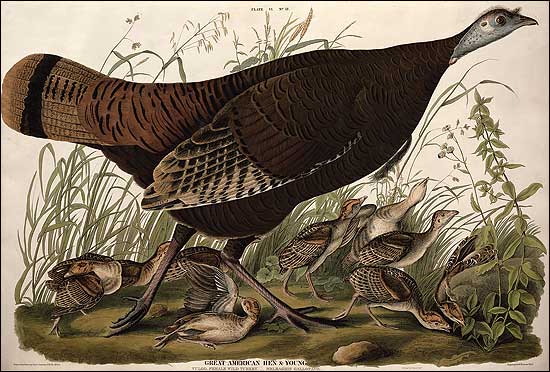 Like the hen turkey in artist (and hunter) John James Audubon’s painting, this one also wore a six- or seven-inch beard. The growth was skinny, and wet from the previous night’s spring showers. Biologists say 10% or less of hen populations are bearded. I’ve seen a number over the years. In October, she might have been in trouble. In May, last Saturday specifically, I gave her walking rights. After killing a nice longbeard on the Maine opener, I was now milking my second tag, but maybe thinking just a little of closing the deal on a second bird (it all ends at noon on June 5).

On my first visit to that spot I’d worked a hot gobbler, cut the distance, and called him in to 10 steps or so. He did a half-circle on me, gobbling the whole time, before fading into the leafed-out green of southern Maine (eluding my freezer in the process). The next time there I heard nothing but the spring sounds of songbirds, and the pesky buzz of mosquitoes. During my most recent hunt, I raised a vocal turkey immediately, found a quick setup, and called that bird in from a couple hundred yards. She stepped into view, and hustled in to my calling, cutting and yelping the whole way. At a distance her size said “jake” but as she approached the buff-tipped chest feathers said “hen” (as did her calling), and the beard (marker pen thick, with a little kink in it) added a twist. She was as fuzzy-headed a newly-hatched poult, though she had no little ones with her; not yet. I thought a silent strutter might be trailing her; no dice.
She was as legal as any gobbler in this “bearded bird” spring state.

We lit up the woods with our mutual calling. I kept that bearded hen turkey there for what amounted to 20 minutes. I let her walk into range, then out of it. No gobbler showed up, and with all that calling, one should have (or so you’d think). I reasoned that she might even be nesting or fairly soon (other hens are sitting now). With any luck, a flock of poults might follow come late spring and summer–a good thing; I’ve even seen them hatch as in late May around here. You hesitate for this reason: I know of at least one spring turkey hunter who legally took a bearded hen and later found eggs inside her. He felt lousy about that.

I’m cool with my decision of course: it’s all good. This week, I passed on killing a tag-out jake–the other option outside a longbeard. Still looking for another big boy in range. In truth though, I don’t fault anyone for shooting any legal turkey. I’ve taken both gobblers and hens over the many years during “either-sex” autumn turkey seasons. I’m just hesitant to drop a legal bearded spring hen is all.

Just curious. You’ve got one tag left in the season. What would you have done when that bearded spring lady came calling?