If you’re like me, music CDs litter your truck by the end of hunting season. Road music is essential to... 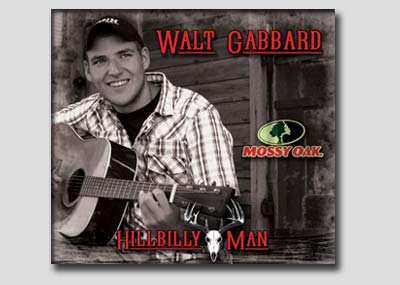 If you’re like me, music CDs litter your truck by the end of hunting season. Road music is essential to keep the four wheels rolling. This season there’s a new addition to my collection.

Walt Gabbard is a hardcore turkey, waterfowl and whitetail hunter. He’s also got a voice as smooth as Kentucky bourbon, not to mention being the creative genius behind Zink Calls’ Turkey Time video productions, and more. His just released CD “Hillbilly Man” is directly available here.

While making this, his first album, Gabbard played with some of the best in the business. “I had a blast down in Nashville recording this CD. It was like a dream come true. We had the opportunity to work with Tim Crouch, by far one of the best fiddle and acoustic guitar players in the world. Mike Kennedy, who has toured with George Strait for years, was on the drums. James Mitchell was on the electric guitar, and has recorded with Dierks Bentley and Alan Jackson. Randy Khors rocked the lap steel. He also played on a few tracks off Bentley’s new CD. And Jay Weaver, longtime band member with Tanya Tucker, cranked the bass,” Gabbard says.

And it doesn’t stop there. Michael Latterell (Grammy award winner) was the engineer on Gabbard’s “Hillbilly Man” CD. As Walt says, “He showed me the ropes and really dug into this album with me. No way this would have been possible if it wasn’t for him. It was a lot of long hours and sleepless nights, and sleeping on his floor in the studio. I can honestly say I wouldn’t change a thing about the CD. I’ve already got a whole new set of songs in the works and really hope I have the opportunity to head back to Nashville and deliver a follow up album.”

The hunting industry has been waiting for this.

As Gabbard says, “Ever since I can remember I’ve looked for songs to get me pumped up in the mornings to go hunting. I remember looking for the ‘Buckmasters Theme’ way back when, just so I could play it in my truck before I went deer hunting. There have always been songs with a slight hunting theme, but never a collection of songs that was completely geared toward the hardcore hunter that could really get you pumped up on the way to your hunting spot or in the offseason.”

Until now. Trust me, this is good-listening stuff full of lyrics about turkey gobblers, dogs, ducks and even deer. There are plenty of songs that speak to hardcore country living as well. I’ll drive on my way to turkey hunt this fall with it blasting in my truck. You guys are probably more than a little like me as this goes. What essential songs do you guys play while on the way to hunt?

Shoot us a quick list of your essential road music.