I had been hearing about the Hoodlum knife for about two months, before I actually got my hands on one.... 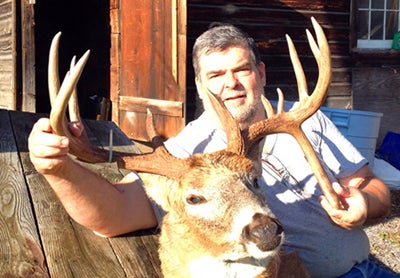 I had been hearing about the Hoodlum knife for about two months, before I actually got my hands on one. The knife’s designer, the late Ron Hood, had supposedly created his finest knife design yet. With a build up like that, I had to find out for myself.

The Saltwater Test – After some of the comments we received from our test of the Bear Grylls Ultimate Knife, I decided to add a salt-water test to our testing standards. The last knife we reviewed, the BG Ultimate, rusted up pretty quick in the harsh seawater. Not so with the Hoodlum. It took its salt-water bath without a blemish, thanks to the coating covering the entire full tang knife (except for the edge, obviously).****

The Chopping Test – The 15.5-inch length of the Hoodlum puts it somewhere between the length of a short machete and a long survival knife. That being said, its weight, length and leverage made chopping a breeze. A 2-inch-diameter green hardwood sapling under a little tension chopped cleanly through in 5 seconds. The knife felt like a machete while I was wielding it for chopping. A 2-inch dead and dry oak branch took about 15 seconds to cleave. I was hoping for a faster time, but that was still decent, especially against the grain. The final chopping test I did was to split small firewood pieces. I would never abuse a smaller knife in this manner, but the Hoodlum was designed to take it. Using a wooden baton and a stump, the knife split kindling and small firewood as if that was its primary function.

The Knife Features – The blade on the Hoodlum is a full 10 inches of 5160 steel with a powder coat finish for corrosion resistance. Its overall length is 15.5 inches and it weighs is 14.6 ounces (22.0 ounces in the sheath). The handle has removable black linen Micarta handle scales over an open-cavity tang, which absorb shock and assist in lashing the knife to a pole for a spear. The blade has a notch in its spine for cutting wire and grabbing the bail on a pot to move around the fire.

The Sheath Features – The sheath is heavy-duty nylon, M.O.L.L.E. compatible with leg strap cord and a roomy front storage carry pouch. There are many ways this knife can be worn or attached to other gear, and the sheath is feather-light, coming in at just over 7 ounces.

Favorite Aspects – I really like the balance of this knife as I move it around. This balancing act also spills over into its functionality. It acts like a well-designed machete when chopping, and feels like a smaller knife when doing detail work. I also feel like it would serve as a much better weapon than many other survival knives. The look of the Hoodlum is absolutely wicked.

Please let us know how the Hoodlum handled for you, by leaving us a comment below.