The word “ration” usually has some negative connotations to it. Either you are rationing your food because you are running... 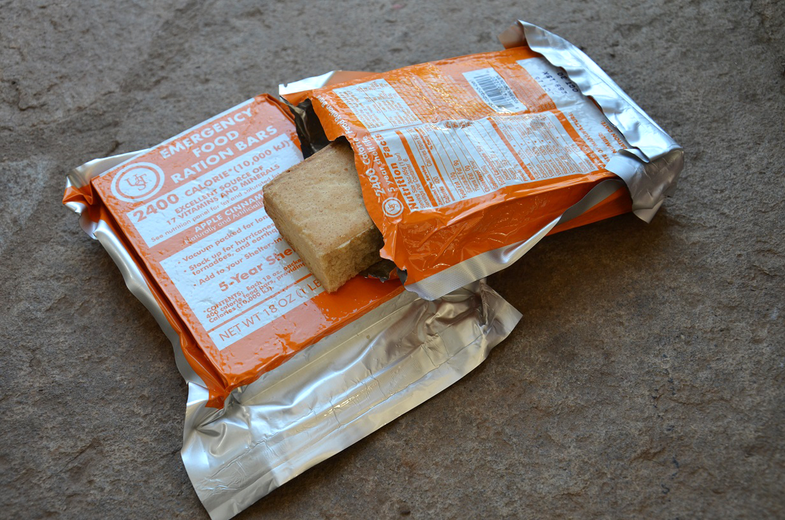 The word “ration” usually has some negative connotations to it. Either you are rationing your food because you are running out, or you are eating rations—which are generally non-preferred food items. But what about UST’s new Emergency Food Ration Bar? Would it be a good ration for an emergency, and would I still eat it if there wasn’t an emergency? Let’s see.

Other than the colorful orange packaging, there was nothing external to differentiate this product from its competitors. They’re all heavy rectangular packages, making me think of foil-wrapped mud bricks for some reason. They all have a five year shelf life, and similar calories per ounce, too. I’ve always been a fan of UST gear, from their fire starters to their camping gear, but how they would fare as bakers, I wasn’t sure. I cut through the plasticized foil wrapper and heard a little “hiss”. Normally, that’s a warning when your food hisses at you, but in this case, I was glad. It meant that the packaging was under a good vacuum seal. With that sort of seal, it may last more than 5 years.

I stuck my nose near the khaki colored bar that was peeking through the slit wrapper. It smelled like apple oatmeal—apple cinnamon oatmeal, to be precise—just as the wrapper advertised. Now for the moment of truth: the first bite. The bar was hard, yes, but no denser than similar products. There was just a moment where a slight doughy taste emerged, but then the apple cinnamon flavor rolled in like the cavalry coming to save the day. It tasted like apple-flavored breakfast oatmeal! And it was sweet, too. I ate one of the 400 calorie cubes in the package of 6, and called it breakfast. Sure, it was a little dry and crumbly, as these rations always are, but it quelled my hunger and is the best tasting one I’ve eaten to date. I’d eat this meal again, emergency or not. And the dog gleefully cleaned up the few crumbs that slipped through my fingers.

I’d recommend this for almost any application. For bug out bags and locations, for vehicle emergency kits, and for home food storage—this product passed my taste test.

Here are the specs of the UST ration:

• Each pack is 18 ounces net weight, 20 ounces total weight
• It has a 5 year shelf life (maybe more)
• It’s made in the USA
• MSRP: $7.99 each
• It has very low sodium (5mg per serving), but 100 percent of 17 vitamins and minerals
• See the nutritional data and find out more on the UST website, UltimateSurvival.com

Have you tried this product or similar ones? Tell us your thoughts by leaving us a comment.