MRE Taste Test: Everything You Need to Know About Meals Ready to Eat

An MRE is a military food ration, the acronym standing for Meal Ready to Eat. But if you ask any... 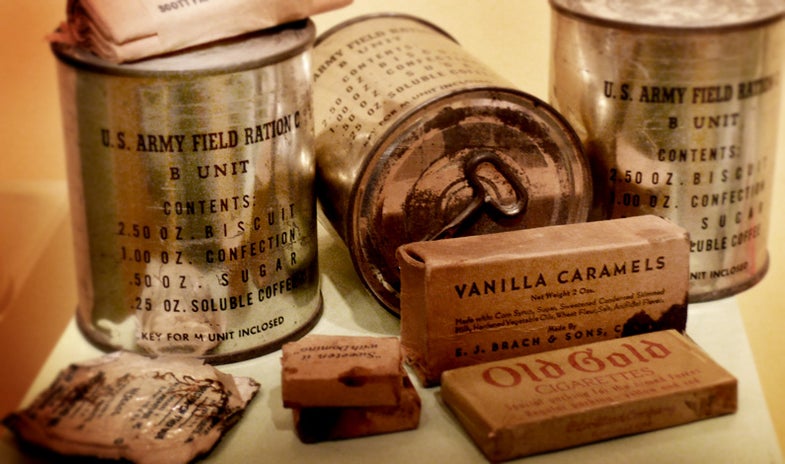 An MRE is a military food ration, the acronym standing for Meal Ready to Eat. But if you ask any soldier who’s eaten perhaps a few too many of these meals-in-a-bag, you’ll hear some other colorful interpretations of those three letters. “Meals Rarely Edible,” “Meals Resembling Excretions,” “Meals Refusing to Exit,” and so forth. Despite those less-than-pleasant associations, MREs are favored by preppers and emergency management folks alike thanks to their high calorie counts and long shelf lives. And, to be honest, they’re really not bad tasting at all. To prove it, I conducted an MRE taste test to compare some of the menu items from the different American manufacturers. It’s been said that hunger is the greatest seasoning, and I hope you’re hungry for this taste test.

Since the days of the first American troops who fought in the Revolutionary War, nutrition has been recognized as an essential element in the effectiveness of a warfighter. The first rations of the American soldier were things like salted pork, hard bread, and beer. In the early 1900s, the “Reserve Ration” changed to one pound of jerky and hard tack biscuits. In 1938, the “C Ration” emerged as an upgrade, though this canned food was widely loathed. Then, from 1958 to 1975, the Meal, Combat, Individual (MCI) ration was the ration of choice, though it was often despised as much as the “C rats”. The first MREs appeared in 1975, and were superior in flavor and nutrition to their predecessors. MREs are still in use today, and even though they are a work in constant progress, they’re a massive upgrade to the jerky and hardtack of yesteryear. (I’m sure few soldiers would protest the return of a ration of beer, however.)

The “real” MREs are usually government property, and not for sale in the civilian world. Civilian MREs, however, are often made by the same manufacturers for the civilian market. As you begin shopping around, you’ll find that food manufacturers like Wornick, Ameriqual, and SoPakCo have been around for decades. Newer to the market, yet still with years of production under their belts, are companies like International Meals Supply and Meal Kit Supply. Wornick manufactures a civilian MRE brand called Eversafe. Ameriqual sells meals with the name APack. Sopakco markets their meals under the name Sure-Paks. International Meals Supply sells a brand called MREStar, and Meal Kit Supply sells civilian MREs under their own name. All of these are produced in the USA, and are USDA inspected. These brands are very similar to the military MREs, typically using the same components.

And a word of recommendation about purchasing. MREs selling on eBay or at a gun show may be a bit cheaper than buying directly from a manufacturer, but you don’t know how they have been stored. They could well have been sitting in a car trunk or in someone’s hot garage for years.

Most of the pouches in an MRE are retort pouches. These are a tough, layered combination of polyester, aluminum foil, and polypropylene. The pouches protect commercially sterilized food for long periods of time, unless they are pierced or rough handled while frozen. Temperature is the biggest factor in an MRE living a long life. Here is how long you can expect them to last at different temperatures:

To protect your MREs and get the maximum shelf-life out of them, store them in a cool, dry environment that is rodent-free. If you cannot guarantee that rats and mice will be absent, place the MREs in a metal container. A dry basement or cool closet is an ideal place for MRE storage.

The entrée is the lynchpin of the whole MRE. There are usually 12 MREs in a case, and many cases only have one or two menu repeats. Since 1993, a number of vegetarian, Kosher and Halal meals have entered the mix, to accommodate the changing face of the U.S. military. Most of the menu choices are well liked, but everyone has their personal favorites. In this round of taste testing, Meal Kit Supply’s chili with beans and the Eversafe beef stew were my favorite entrees. The chili was rich and meaty, spicy and tasted almost homemade. The Eversafe beef stew reminded me of Dinty Moore beef stew—savory and filling. The pork patty from Eversafe was the one entrée that I hope I never see again. Meal Kit Supply’s Apple Maple Oatmeal was the surprise hit of this testing. It reminded me of a nerd’s first girlfriend—pretty rough to look at, but very sweet and likeable.
Entrée Winner: Meal Kit Supply’s Chili with beans. Just like mom used to make!

The crackers, cornbread, tortillas, and other bread products are generally tasty across the brands, though the crackers could use some more salt (pull some from the entrees, please) and the tortillas are kind of gummy. Every brand had horrible rice. It must be something in the packaging process, because even the small pouches of ready-to-eat Uncle Ben’s rice at the grocery store share the unfortunate qualities of MRE rice. Served hot or cold, it is gelatinous and possesses some strange “malty” flavor. Anybody want my rice pouches?

Some are yummy, some are not. I liken it to beverage roulette. MREStar’s “Strawberry Dairyshake Powder” has a sketchy name, but when mixed with water it becomes pink, sweet manna from heaven. On the other hand, APack’s lemon drink powder made me think I just put sour powdered chalk in my water. Luckily, you can grab the sugar packets from the accessory pack and doctor up mediocre drinks. Typically, you’ll have several chances to win beverage roulette with each MRE. There are usually three different powdered beverage packets (coffee, cocoa, and electrolyte) in each.
Drink Winner: MREStar’s Strawberry Dairyshake. Tastes a lot better than it sounds!

The snacks can provide you the love that your entrée might have skimped on, and they’re often surprises. Open a pouch of “Toffee rolls, chocolate” and a pack of Tootsie Rolls falls out. Rip into a pouch of Eversafe’s “Cookies, chocolate chip” and you’d swear they were Keebler mini cookies, just like the ones in your kid’s lunch. And did I mention that I am in love with MREStar’s corn nuts snack. The snacks get it right, when the rice and some of the beverages don’t.
Snack Winner: Eversafe’s chocolate chip cookies. Who made these, the Keebler elves?

The Flameless Ration Heater (or FRH) is a great morale booster, an enhancer of food flavor, and a beloved MRE ingredient in cold climates. These heating pouches have a five-year shelf-life, and provide at least enough heat to warm up the entrée in your MRE. Fill the bag with water to the line indicated, and the heater will activate. Within a minute or two, the FRH will jump to a high temperature and stay there for about 10 minutes. Some brands, such as MREStar, use a larger amount of these heating granules, giving you enough to heat for the entrée, a side dish, and maybe even a drink. In icy emergencies, these heaters can also heat canned food and other items, or be placed between layers of clothing to serve as a steamy yet toasty body heater. The highest temperature I read was 160 degrees Fahrenheit on Meal Kit Supply’s FRH.
Heater Winner: MREStar’s FRH. Ran hotter and longer than the rest.

Everybody needs accessories, but I’m not happy with the recent changes we’ve seen in this particular area. Long gone are the tiny little toilet paper rolls, mini bottles of Tabasco, matches, and all the other treats. Contemporary MRE accessory packs include a spoon, sugar packets, salt, pepper, a napkin, a wet wipe, and maybe a bit of chewing gum—or maybe not.
Accessories Winner: Eversafe’s Accessories. Thoughtfully included water for the heater.