Survival Medicine: Why You Need EMT Shears In Your Kit

Photograph by Tim MacWelch I’ve had EMT shears rolling around in the bottom of my medical kit for years now.... 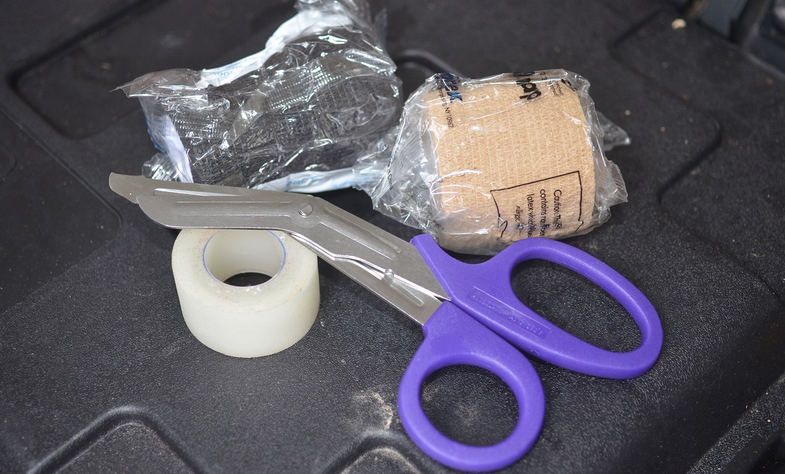 I’ve had EMT shears rolling around in the bottom of my medical kit for years now. I’ve known these heavy-duty scissors were handy, but hadn’t really thought of them as critical equipment. Until this weekend.

After volunteering to be “victim number one” at the Wilderness First Aid class put on by instructor Rick Pyle of American Medical Preparedness, these snazzy scissors have moved way up the ladder in my medical kit.

In case you’re unfamiliar with EMT shears, these are very strong scissors with a blunt rounded tip so that they won’t impale your patient. They’re also strong enough to cut through seat belts, leather belts, and even a penny (though this will dull them considerably). Instructor Pyle reminded us in class that there’s no place for modesty in emergency medicine. You may need to cut the clothing off someone in order to reach their wound and treat it properly. And sometimes wounds are in ticklish places. In one of the many hands-on scenarios during the weekend’s remarkably beginner-friendly training, the class had to treat a life-sized dummy which had a large survival knife imbedded in his upper thigh and a severe burn on his opposite hip. While caring for “Steve” the dummy, it became apparent that his pants would have to go. I secretly thanked the Lord and instructor Pyle that the class was cutting on the dummy’s pants, and not my britches!

When they walked up on the scene I just described, the class was already feeling the pinch of anxiety. They had a time constraint on the exercise, which added heavy undertones of urgency and stress, and made the scenario feel much more realistic. As did the very nasty looking fake blood that liberally coated the mannequin’s lower body.

During the emotionally charged and stressful situation of caring for traumatic injury, we learned that the last thing you should do is try to cut the clothing with a sharp pocket knife or sharp-pointed scissors. In your haste, you are very likely to cut your patient and cause further injury. You should carry and use EMT shears instead, which are both sharp and strong—and designed to protect your already injured patient.

With “Steve’s” wounds dressed and the knife stabilized, the class fashioned a litter and carried their patient back to camp, thus completing the final scenario and earning a certificate in wilderness first aid. I can’t thank Rick Pyle enough for letting me be involved in his excellent training, the best I’ve ever seen. I’d recommend that everyone pursue medical training, which is the most likely set of survival skills you’ll ever need.

You can find out more about American Medical Preparedness here. Do you carry EMT shears? Ever used them? Tell us your story by leaving a comment.