If the Delaware Water Gap Is Designated as the Country’s Newest National Park, What Does That Mean for Hunters?

The Sierra Club wants to turn the Delaware Water Gap into a National Park and Preserve. Sportsmen worry that the designation would reduce existing public hunting access 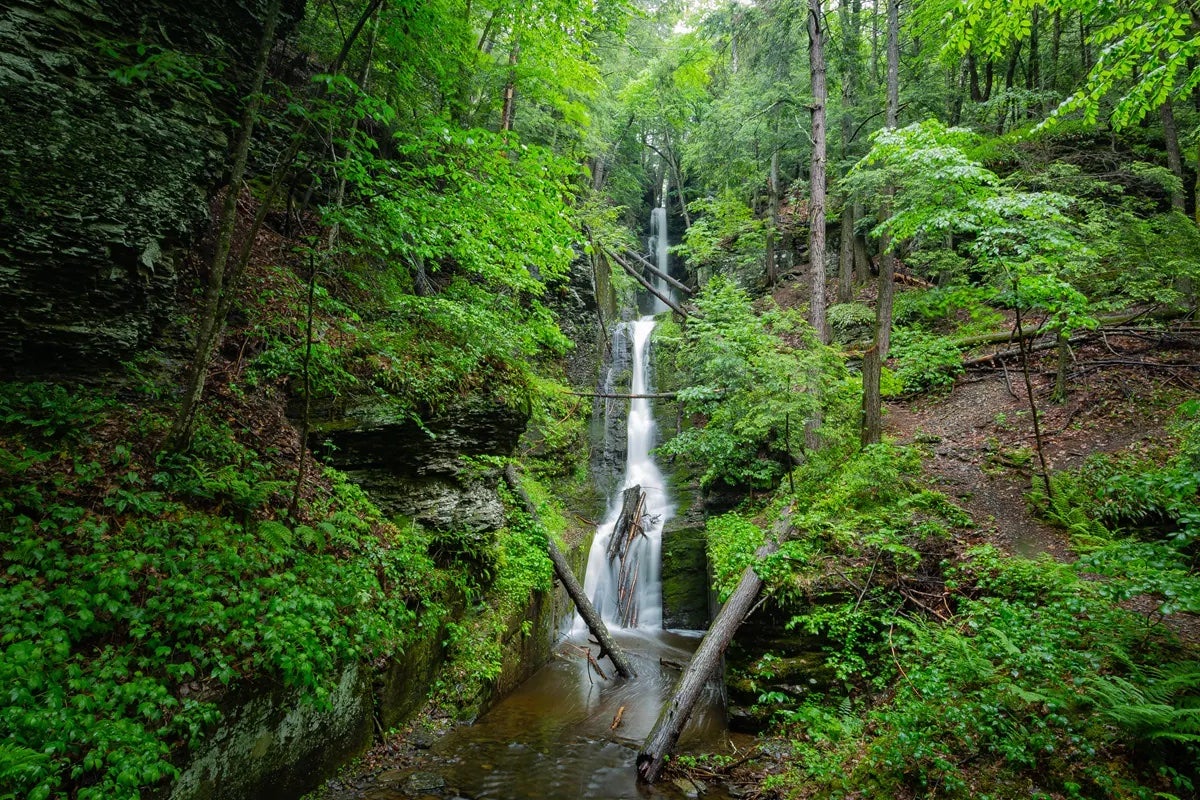 Delaware Water Gap National Recreation Area is home to waterfalls and scenic vistas, along with 40 miles of river, 100+ miles of trails, and 70,00 acres of huntable land. NPS
SHARE

The Delaware Water Gap National Recreation Area is one of the most popular outdoor destinations for sportsmen on the East Coast. Managed by the National Park Service, the National Recreation Area straddling Pennsylvania and New Jersey provides access to roughly 70,000 acres of huntable public land, along with 40 miles of fishable riverfront. The area is also extremely popular with hikers, paddlers, photographers, and weekend explorers from nearby cities, and it sees nearly as many visitors as Yellowstone National Park each year. And partly because there are no national parks located between Acadia (more than 500 miles to the north) and Shenandoah (more than 250 miles to the south), an effort is underway to re-designate Delaware Water Gap National Recreation Area as a National Park and Preserve.

Which, on the surface, seems like a reasonable idea. The new designation would result in a significant increase in funding. It would raise the national profile of the Delaware Water Gap and likely bring more visitors to the area than ever before. But a number of local hunters and hunting groups in the area are hesitant to embrace this designation because hunting is not a permitted in National Parks. While hunting would likely be permitted in the Preserve portion of Delaware Water Gap, these groups are rightfully concerned that the change could result in a net loss of huntable acres, as has been the case with previous National Park designations.

How a Proposed Dam Site Became a National Treasure

When the federal government acquired the roughly 70,000-acre tract in 1960, it did so with the intention of constructing Tocks Island Dam, which would have created a 37-mile-long reservoir surrounded by Tocks Island Recreation Area. The project proved controversial, however, and after the feds realized that the cost of the project would likely outweigh its benefits, the Tocks Island project was shelved in 1975 and this acreage was handed over to the National Park Service. With that decision, a former damsite became a 70,000-acre park with 40 miles of protected free-flowing river.

A Deep History of Hunting and Fishing on the Delaware

NPS spokesperson Kathleen Sandt grew up near Delaware Water Gap, and she says that one of the main reasons the Delaware Water Gap is so popular is because it is located in the heart of the most densely populated corner of the country. The area is within a day’s drive from Philadelphia, New York City, and several other major metropolitan areas located along the Eastern Seaboard.

“Our location is key,” Sandt says. “We are within a six hour drive of the 55 million or so people who live in that Boston-to-Washington corridor. A lot of people from those urban centers are coming to find that open space—that connection with nature—and to see the beauty that we have to offer.”

She explains that the area’s famous waterfalls, its 100-plus miles of hiking trails, and the surrounding scenery are part of the reason the area is so popular. But it’s the cultural resources, she says, that make it such special place, as archaeological digs near the river have documented more than 10,000 years of continuous human habitation there.

“People have been on the land, changing it, and being changed by it for 12,000 years,” Sandt says. “Hunter-gatherers were here, and archaeologists have found net sinkers that tell us people were fishing here. People were also hunting here, and that was key to their ability to survive as well. So that tradition is longstanding.”

With that deep-rooted tradition in mind, hunting was written into the original legislation that created Delaware Water Gap National Recreation Area.

“They created the park stating that hunting shall be allowed here,” Sandt explains, and she says that hunters continue to be an important part of the landscape today.

Concerns in the Local Hunting Community

Sandt makes it explicitly clear that the NPS is not involved with the “externally proposed change in designation.” She says the idea is currently being floated by the Pennsylvania and New Jersey chapters of the Sierra Club, and that until Congress introduces a bill to officially re-designate Delaware Water Gap, the NPS is unable to comment on a potential National Park and Preserve designation.

The Pennsylvania chapter of the Sierra Club did not respond to requests for comment. But Donald Miles, the vice chair of the Pennsylvania chapter, told the Associated Press back in November 2021 that the Sierra Club’s vision for a National Park and Preserve would maintain hunting and fishing as traditional uses at Delaware Water Gap. He made assurances that “hunters and fishermen will be among the first people we speak to” should Congress move forward with the idea.

This recent history helps explain why groups like the Pennsylvania and New Jersey Chapters of Backcountry Hunters and Anglers are hesitant to get behind the Sierra Club’s push to re-designate Delaware Water Gap.

Read Next: Our Newest National Park Allows Hunting? How Locals Fought for the New River Gorge’s Sporting Traditions, and Tourism

“While we appreciate that hunting is acknowledged as important to maintain by those working for this change, we are concerned that a loss of huntable acres could still occur,” the two chapters said in a joint statement. They added that if any loss should occur, “those acres should be offset by newly acquired lands currently not open to public hunting.”

BHA Pennsylvania chapter chairman Don Rank says that even if they tried to keep the entire 70,000 acres open to hunting, as it is today, the National Park and Preserve designation would require more infrastructure to support the growing number of visitors. “Parking lots, buildings—all of that is going to take away some valuable habitat,” he says.

This touches on a bigger issue that goes beyond hunting access. Certain NPS designations, and particularly national park designations, can often become a double-edged sword—not just for the people who live and recreate in an area, but also for the wildlife and habitat the designation is meant to protect. Because national parks get top billing, they attract plenty of visitors (and their dollars). But they can also usher in new headaches: overcrowding, littering, habitat degradation, and red tape. In addition to hunting bans, many national parks forbid dogs and backcountry camping, and they sometimes implement permit systems for certain camping locations or river access.

Looking outside of the tens of thousands of huntable acres that the National Recreation Area currently provides, Rank says there is a decent amount of public land in that part of Pennsylvania. Of the roughly 1 million acres of state game lands designated for hunting in the Keystone State, a little more than 25,000 are located within a one-hour drive of Delaware Water Gap. But Rank’s concern is that any loss of huntable land there would force hunters to concentrate on these smaller tracts.

“We’re concerned because there are 70,000 acres right there between the two states,” Rank says. “That’s a lot of hunting access, and to lose any of it would be a blow to our hunting and angling community.”