‘Deal Of Century’ to Open 70,000 Adirondack Acres to Public Hunting

The “deal of the century” has outdoorsmen throughout the Northeast eagerly planning forays into nearly 70,000 acres of Adirondack wilderness... 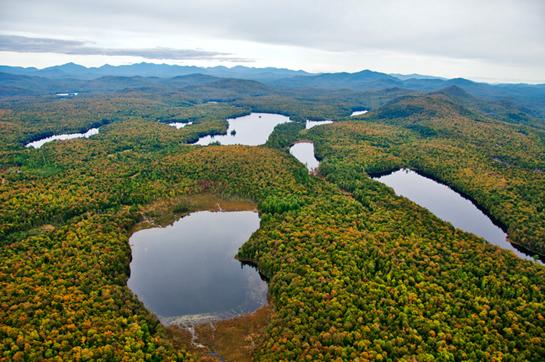 The “deal of the century” has outdoorsmen throughout the Northeast eagerly planning forays into nearly 70,000 acres of Adirondack wilderness teeming with deer, moose, and bear that, in some areas, hasn’t been hunted since the Civil War as New York State proceeds with its $50 million acquisition of former Finch, Pruyn & Co. timberlands by 2017.

The Adirondack Park Agency voted 11-0 on Dec. 13 to classify 161,000 acres of former Pruyn lands in New York’s vast Adirondack Park. More than 69,000 acres in more remote, interior areas suitable for backcountry activities will be classified as wilderness, while more than 89,000 acres in more accessible areas will be classified as wild forest, allowing snowmobiling and vehicular access.

Public hearings will be held on the proposed classifications in 2014. Once the designations are approved, the New York Department of Conservation (DEC) will develop unit management plans, which will include input garnered during public hearings.

In 2007, The Nature Conservancy (TNC) purchased the entire 161,000-acre property from Pruyn and has been managing it since, allowing limited access. In 2010, the TNC and DEC completed a “working forest conservation easement” on 89,000 acres, which would allow the Pruyn mill at Glens Falls, which employs more than 700 people, to remain open for at least 20 years.

The 69,000-acre area — the largest addition to the state forest preserve in 117 years — includes 180 miles of rivers and streams, 175 lakes and ponds, 465 miles of undeveloped shoreline along rivers, streams, lakes, and ponds and six mountains taller than 2,000 feet. It also includes 5 percent of the Upper Hudson River watershed.

The state’s acquisition is “a “fairly remarkable decision,” APA Commissioner Dick Booth told the Press-Republican of Plattsburgh, N.Y. “Flash forward a hundred years and I would suggest to you (that) we are taking actions today for resources people will enjoy for a very long time.”

The agreement will provide abundant opportunities for hunting, fishing, hiking, camping, mountain biking, and cross-country skiing. There are vast stretches that haven’t been hunted since Puryn purchased the land shortly after the Civil War.

Much of these lands are concentrated within the central lake region of Adirondack Park in the towns of Newcomb, Indian Lake, North Hudson, and Minerva. Key parcels include the Essex Chain of Lakes, which features the Hudson River and Boreas Ponds, the Macintyre Tract, OK Slip Falls, including part of the Hudson Gorge, and several smaller pieces in the southeast section of the park.

* Essex Chain of Lakes: Contains mountains, cliffs, 11 lakes, ponds, bogs, swamps, alluvial forests, and flat and white-water rivers. The parcels feature moose, bobcat and black bear, and brook trout, landlocked salmon, and small and largemouth bass. Many lakes and ponds are linked or within portaging distance of each other with brook trout and landlocked salmon.

* Southern Tracts: Four tracts in Saratoga and Fulton counties identified by local municipalities as having high recreational value and including Thousand Acre Swamp, which features habitat for moose and provides a snowmobile connector trail linking the area to the popular Mulleyville snowmobile trail system.

The only discord in the land deal is the fate of roughly 20 traditional hunting clubs that leased land from Pruyn for decades. These clubs have been given the opportunity to relocate onto the 89,000 acres of “easement” lands still managed by TNC, but must vacate leased lands within areas to be purchased by the state by 2018.

Fred Monroe, head of the Adirondack Park Local Government Review Board who is also a member of a club that has hunted the same leased Puryn tract four 52 years, said some clubs will eventually relocate while others will probably disband.

“Yeah, they might relocate onto easement lands and suffer a big loss, the loss of their camp and having to build another one or buy another one,” Monroe told North Country PR. “I think some people will. I’m considering that myself.”

— A new air of cooperation