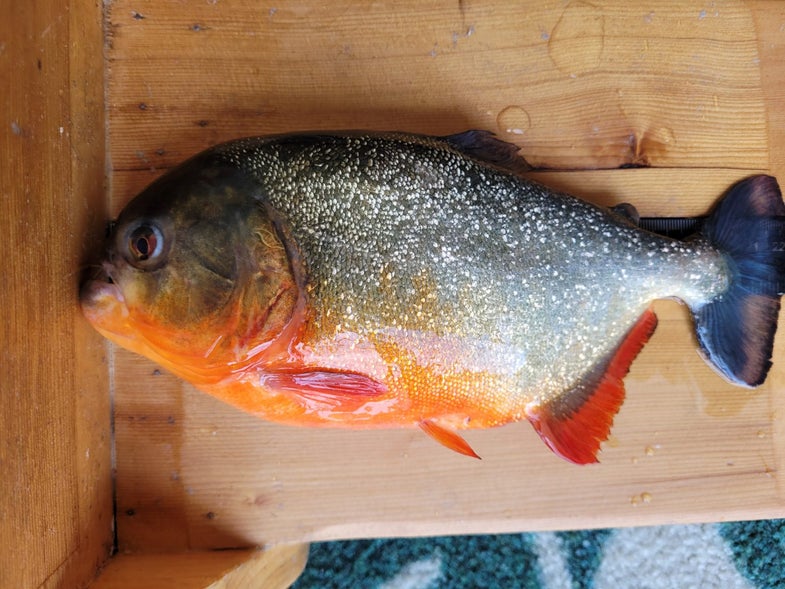 The discovery of a red piranha in an LSU lake has biologists on high alert.
SHARE

University Lake near the Louisiana State University campus recently had a red piranha, one of the world’s most toothy and feared fish, in its waters

Illegal to possess in Louisiana, the red piranha was found in the lake. Officials are making sure more piranhas are not swimming in the well-known lake, according to a report in the New York Post.

Louisiana Department of Wildlife and Fisheries personnel believe the piranha was illegally kept as a pet and released.

Piranhas are native to South American. The red piranha is a flesh-eating fish. They are only 4 to 8 inches long, about the size of a large bluegill. But the freshwater red piranha is commonly found in large schools in its home waters, and regularly swarm to devour fish and some mammals with their fearsome, razor-edged teeth.

Unlike most freshwater fish, piranhas have sharp-edged teeth more like saltwater bluefish or mackerel than rounded teeth like freshwater pike, walleye, and muskie.

Read Next: Dangerous Fish: 10 Fish You Need to Handle With Care

Louisiana officials are asking University Lake area residents to use caution should they discover a piranha, as their bite is painful, and to report the find to authorities.

Louisiana and some other states (especially in the Deep South where freshwaters are warm) prohibit piranha sales so the fish are not released into the wild and thrive. A number of tropical fish species are abundant in South Florida, so the precautions on piranhas are warranted.

Piranhas have been discovered previously in other states such as Texas, Virginia, Pennsylvania, Oklahoma, Ohio, Minnesota, Michigan, Massachusetts, Hawaii and Florida.