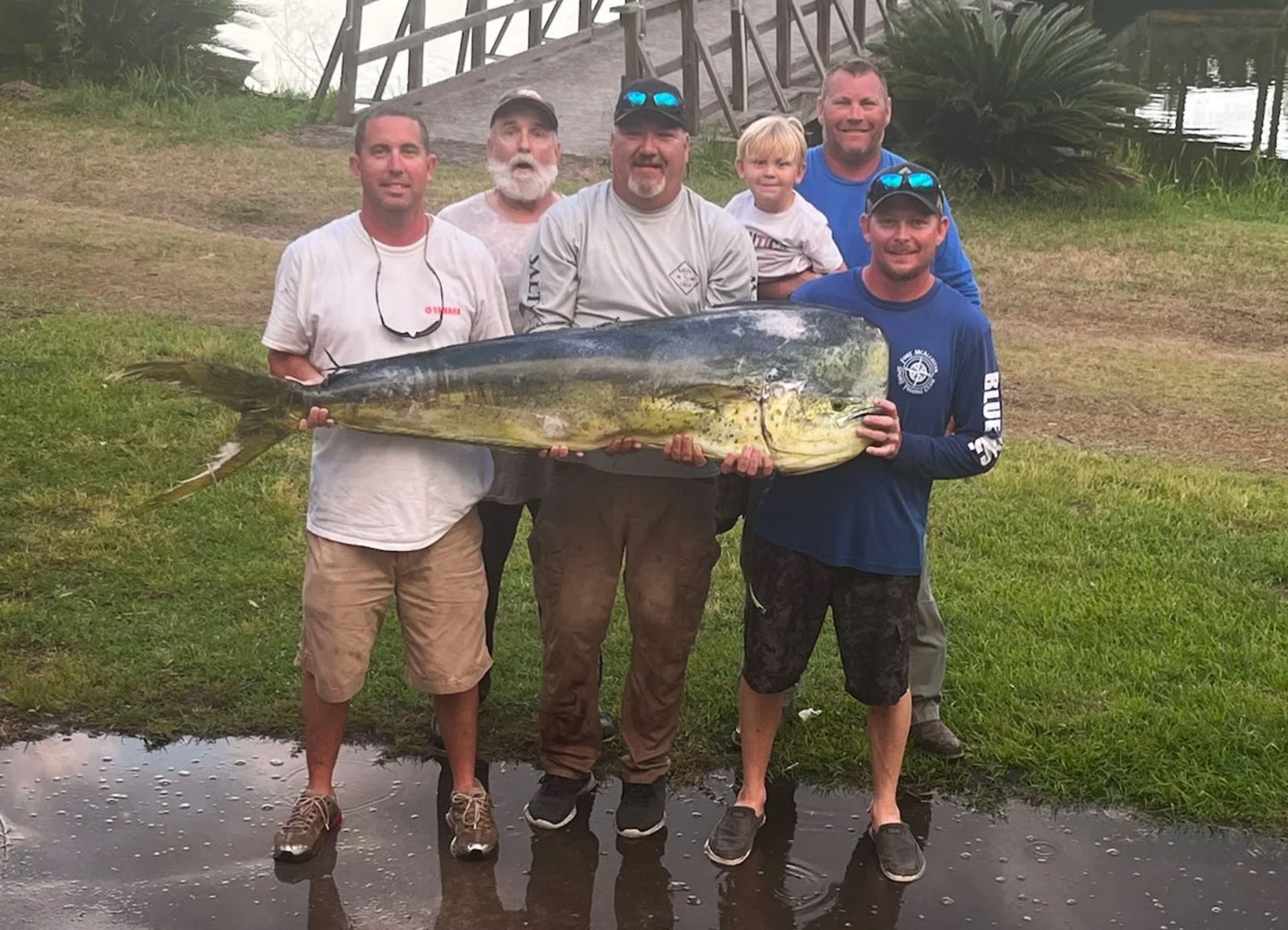 On April 26, James Roberts caught a mahi-mahi that qualifies as the new state record. The fish was taken about 80 miles east of St. Catherine’s Island. Roberts was fishing with five buddies who regularly target that area.

The group had been in schools of big mahi-mahi, also known as dolphin fish, for most of the day. Their fish box was full and had used all their ballyhoo baits. So they were bringing in their lines at about three in the afternoon for the run back to the boat ramp when the fish hit.

“I’d just popped the fishing line off the outrigger to bring the bait back to the boat, when this giant of a dolphin smashed the bait and lure two or three times, and then just took off tail-walking and screaming drag off the reel,” says Roberts. “He swallowed the whole 7-inch lure and bait, and I didn’t think the fish would stop during that first run. He hit about 100 yards behind our trolling boat, and that first run screamed another 500 yards of 65-pound test braided line off the reel. All I could do was hold on.”

After the fish’s first blazing run, Roberts settled in to fight the fish. But it cartwheeled, tail-danced, and made more runs for another 30 minutes before he got control of it. Then he worked it near their 25-foot Contender center-console boat named Salty Intentions.

“It took three of us to gaff that fish and haul it aboard,” said Roberts, who works for a shipping company in the port of Garden City, Georgia.

Then the five anglers headed west, back to the Georgia DNR Demere Creek Ramp where they’d launched that morning. They’d boated dozens of mahi-mahi, most big fish in the 15 to 20-pound range. But Roberts’ catch was a giant, and the anglers knew it could be a state record. They loaded up the boat and headed to the Georgia DNR office in nearby Richmond Hill to have it officially weighed.

Roberts said they’d first started trolling too far east, in deeper and colder water, and didn’t locate better and warmer water until they turned back toward shore.

“We found warmer water and then found weedlines and put out baits, and it was non-stop action with dolphin,” he says. “We had several triple-headers on dolphin and some doubleheaders, too. It was incredible, we finally just ran out of bait.”

Roberts says his big dolphin hit a ballyhoo bait fitted to a multi-colored Mahi Manic lure. He credits all the great fishing to the boat captain, Michael Bell, and the other anglers aboard, including James Bashlor, Mike Cahook, and Sean Bragg, all local Georgia anglers who fish almost every weekend together off the coast.