First Look: The 2022 Toyota Tundra Is a Sophisticated, Reliable Pickup

Toyota has finally upgraded its reliable Tundra. Here's what the new truck has to offer 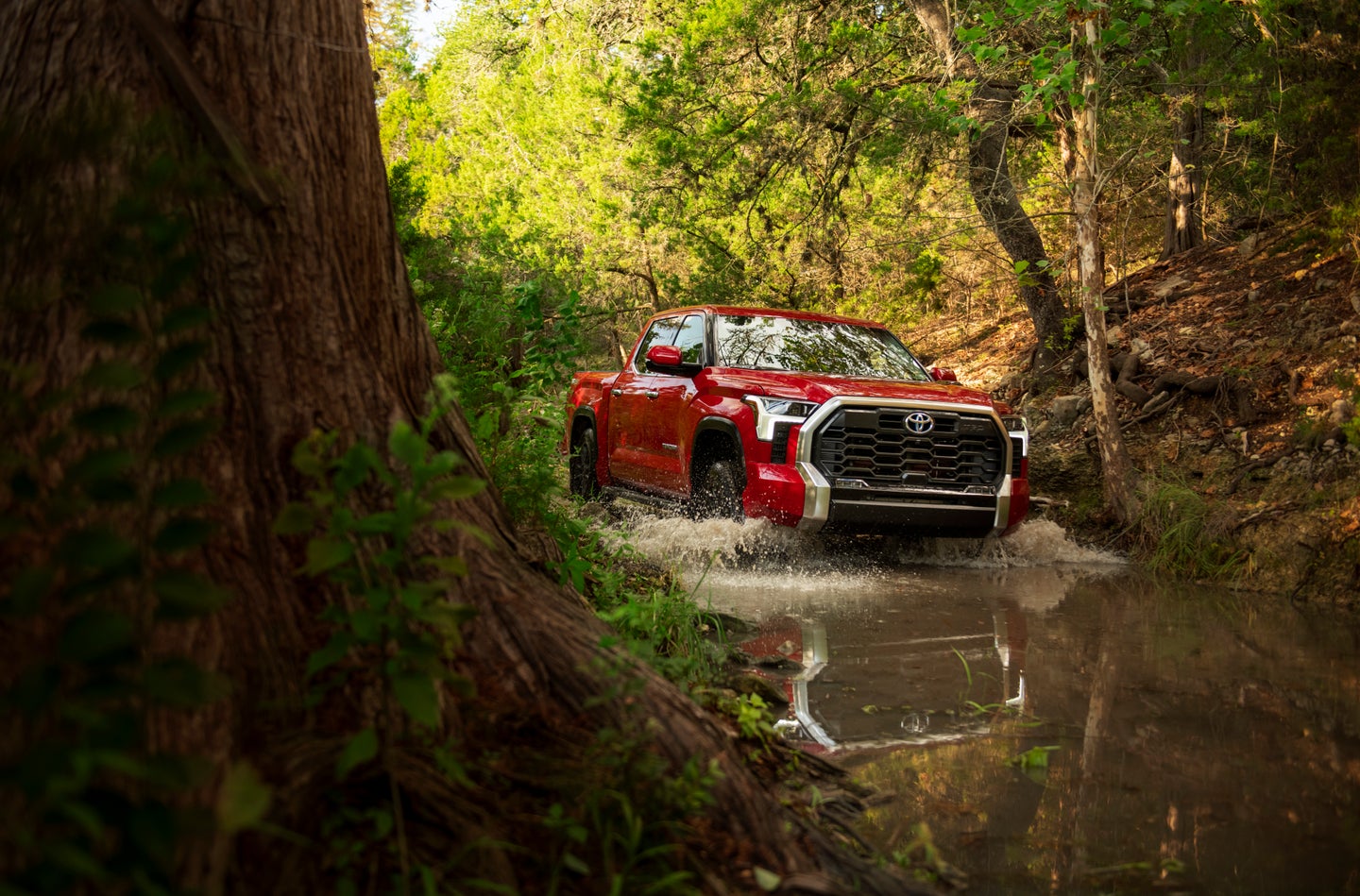 It's been a long time coming, but Toyota finally upgraded the Tundra. Toyota
SHARE

The Toyota Tundra is popular for one reason: reliability. But the simple, old-school components that delivered cheap running costs in the long term also led to the truck falling, in recent years, well behind the competition on everything from performance, to off-road capability, to available tech features. This all-new 2022 model aims to correct that, with new, totally modern powertrains, sophisticated interiors, and rear suspension designed to boost road manners. Can it still serve as the go-to workhorse for hunters and anglers on a budget? I test drove the 2022 Tundra to find out.

What’s New About the Tundra?

The new Tundra rides on a new, modular frame design that also underpins the new Toyota Land Cruiser, and will also provide a platform for next year’s Lexus LX600 and the next generation Toyota Sequoia. Evoking the Land Cruiser name may give the impression that this approach is designed to boost off-road capability, but platform sharing like this is more about cutting costs, than it is increasing performance.

Compared to the Land Cruiser, the new Tundra’s frame isn’t just longer (the truck is now available with a full four-door cab and 6.5-foot bed), but also mounts its rear shock absorbers outboard of the frame rails. The 300-series Cruiser keeps its shocks inside the frame for better articulation.

That shock arrangement comes as something of a surprise, and speaks to the intended role the Tundra is designed to play. Where the previous generation Tundra (released in 2007) relied on traditional leaf springs—a simple, robust design that’s good for carrying weight, but bad at articulation—this all-new Tundra switches to coil springs, which are capable of delivering a smoother ride, better handling, and, on paper at least, better articulation. But rather than take advantage of that theoretical advantage in wheel travel over extreme obstacles, Toyota’s engineers instead focussed using those coils to deliver a smooth ride, and to maximize stability while the truck is loaded down, or towing a heavy trailer.

With less wheel articulation than the outgoing model, this new Tundra is all about enhancing on-road performance, comfort, and utility. And man, its performance on pavement is impressive.

That improvement starts with the new powertrains. There’s two versions: a 3.5-liter twin-turbo V-6 that generates 389-horsepower, and 479 pound-feed of torque. As a base motor, it’s impressive for two reasons. Not only does it provide five horsepower and 78 pound-feet of torque more than the old 5.7-liter V-8, but it also increase combined fuel economy from 14, to 19 miles per gallon. There’s also a gasoline-electric hybrid version, that bolts an electric motor to the rear of that V-6, in order to add power and torque, for a total of 437-horsepower and 583 pound-feet. Toyota has not yet released fuel economy numbers for the hybrid, but says they will be even better than 19 MPG.

Both versions of that engine are mated to a new 10-speed automatic. That’s notable not just because those four extra speeds better multiply torque, and deliver a much more responsive drive, but also because this arrangement allows the hybrid Tundra (they’re calling it “iForce Max”) to drive in a totally conventional manner. Torque moves through the gears, no matter which combination of the motor or engine is active at the time, into a two-speed transfer case, and through driveshafts to the front and rear axles. This means you switch between two-wheel drive, four high, and four low, just like normal.

It’s inside where owners of the previous Tundra will find the most change. Where the old model’s interior felt decidedly behind the times, the all-new truck is dominated by a 14-inch touchscreen. And where previous Toyotas have struggled with infotainment systems plagued by low-resolution screen and ancient software, the system in this Tundra looks and feels as sharp as an iPad. That centerpiece is then complemented by an interior that’s larger in every dimension, and now filled with soft-touch materials. At fancier trim levels, the new Tundra is indistinguishable inside from a luxury car.

In addition to the various trim levels, which run from the SR work truck, up to the consumer-grade SR5, then into the Limited, Platinum, and 1794 lux trims, there’s two off-road packages to choose from: TRD Offroad, and TRD Pro.

TRD Offroad adds, for the first time on a Tundra, a locking rear differential. That’s good, because decreasing articulation means that the new truck lifts a rear wheel very easily over uneven terrain. By locking the speeds of both wheels on that rear axle together, that feature allows you to keep moving forward, even with one wheel in the air. TRD Offroad also brings updated electronic traction—what Toyota calls Multi Terrain Select, and Crawl Control. MTS uses the ABS system to match wheel speeds electronically off-road. Crawl Control works like cruise control at very low speeds, over challenging obstacles, taking control of the throttle and brakes so the driver is free to concentrate only on steering. Past versions of these systems have been prone to lurches, crunches, and were generally annoying to use, even if they were effective. For this new Tundra, Toyota has achieved massive improvements; MTS and Crawl are now completely smooth, and annoyance free. You’ll want to use these buttons now. TRD Offroad also includes a set of Bilsten dampers.

TRD Pro adds a bunch of flash, with camo-print body cladding and seats, a bright red interior, a little light bar in the grille, enormous badges, forged BBS wheels mounted with 33-inch tires, a TRD-branded skid plate, and a much more prominent front sway bar. Describing that sway bar is perhaps the best way to communicate what this new TRD Pro is all about. Rather than feature a disconnect function, which would add back in some of that lost articulation, the sway bar is instead a much more robust item than that present on the stock vehicle. That will better enable it to counter body roll induced by the fitment of large tires. A three-inch lift kit will be available from dealers, enabling owners to fit 35-inch tires. In TRD Pro form, with that stronger sway bar, the new Tundra will offer a much friendlier drive on-road. TRD Pro also includes some very basic Fox shocks, which deliver one inch of additional ride height over other versions of the Tundra.

What’s Good About the New Tundra?

What’s Bad About the New Tundra?

The Tundra Targets the Middle Ground

Toyota can’t claim the sales volume of domestic rivals, so can’t support the extreme levels of differentiation available from their full-size truck product ranges. Where trucks like the Ford F-150, Dodge Ram, and Chevy Silverado are able to target niche users with specific versions and options tailored to extreme off-roading, or very heavy towing, the Tundra instead targets the middle ground. It’s a truck designed to serve the general purpose needs of normal pickup buyers.

And it makes a very good case for itself in that role. It can’t out tow, out haul, or out perform the competition, but it can deliver performance across all those tasks, and daily driving, with a level of ease and competence that most drivers will find reassuring.

If you’re looking for one truck to handle all your vehicle needs, and those needs don’t involve tackling the Rubicon Trail or towing a 747, then the Tundra will be the right tuck for you.

How To Configure a Tundra

Toyota hasn’t yet released pricing for the new Tundra, but I can still make some conclusions from the comparative merits of the various trims.

If I was looking to use a Tundra off-road with any regularity, I’d definitely check the box for the TRD Offroad. It’s available on any trim level, from SR5 on up, and will absolutely justify what’s likely to be a small premium thanks to the addition of that rear locker, and the off-road electronics.

Serious off-roaders looking to maximize the Tundra’s capability will be best off starting with TRD Offroad, then turning to the aftermarket for their suspension. Not only is maximum payload on the TRD Pro limited to 1,600 pounds, but it offers too little in the way of additional capability for what’s likely to be a significant premium.

If you plan to regularly carry a lot of weight in the bed, then adding the optional air springs to the rear axle will be a very good idea. They deliver adjustable ride height through a button on the dash, allowing you to compensate for a heavy load, or lower the bed to ease loading.