If you love old trucks, consider buying one for your next hunting rig 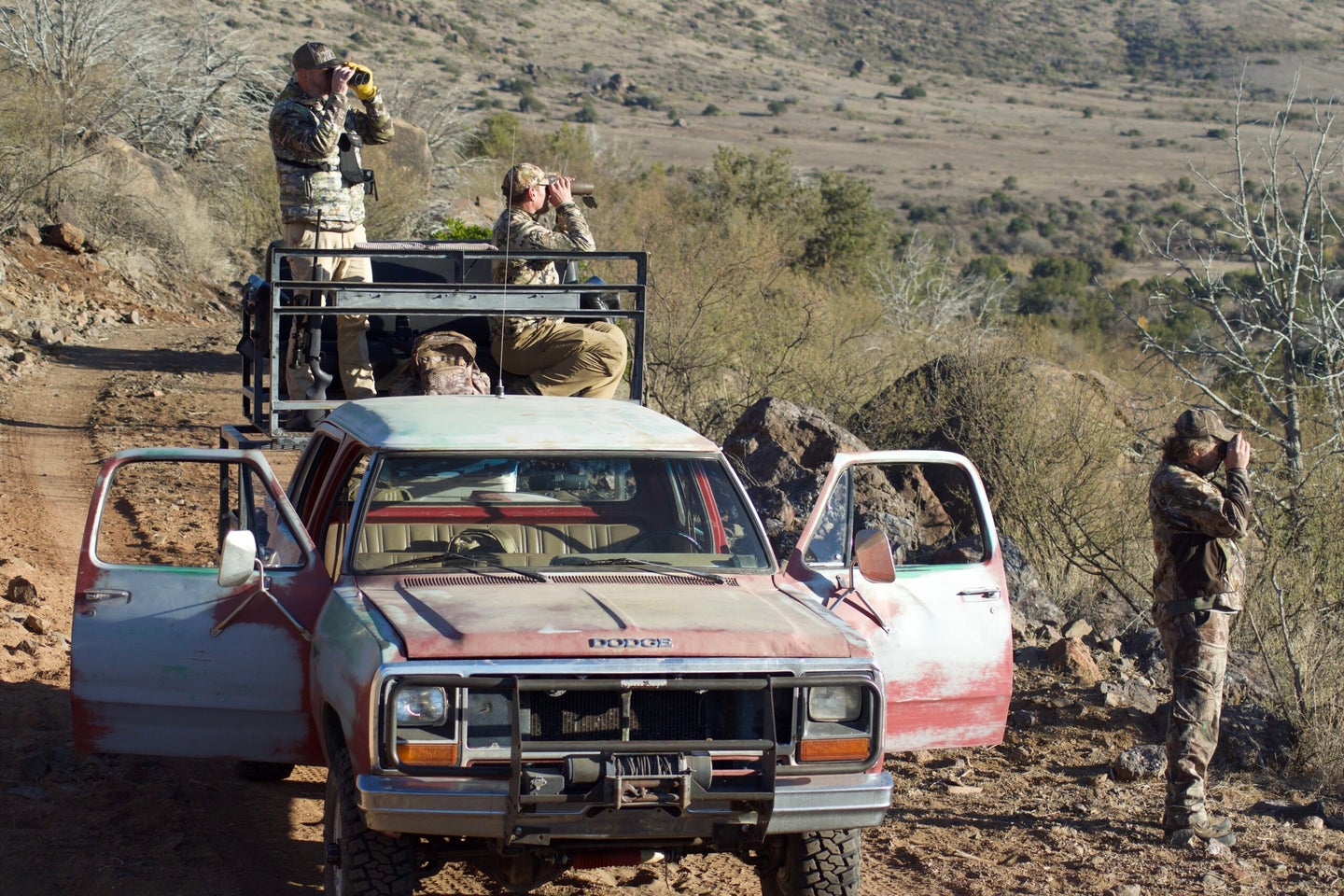 If you want to combine your love of hunting with an old square-body Chevy, you’re in luck. The right classic truck can make a damn good hunting truck. It might not be capable as a daily driver, but if you’re in need of a dedicated hunting rig, they won’t break the bank. Buying an old 1970s Dodge Ram—something most consumers would consider an antique—is far more affordable than driving a new pickup off the lot.

I’ve written about the best used trucks for hunting, but the vehicles on that list were built after 1990. They come with many of the modern features you expect, albeit at a huge discount compared to buying new. Classic trucks, however, require you to adjust your mindset when you start shopping. If you decide to buy one, you’ll have to be a handy mechanic, or know one who’s willing to help out. But the cool thing about old trucks is they are far simpler to work on than today’s vehicles. And if you know how to fix one, then a classic truck can be an ideal hunting rig.

The number of used trucks on the road should tell you something: They age damn well. A classic truck that’s been taken care of can absolutely be a reliable and capable hunting rig. But it’s also important to know what you’re getting into.

Classic trucks, as I define them, were generally made before 1990. Many of them use carburetors instead of fuel injection to deliver gas (and air) to the engine, and some older examples may not have air conditioning, seatbelts, or an FM radio. You can add a degree of modern safety with upgrades like disc brake conversions, but there are some older vehicles that you’ll just have to live with as-is. Anything rubber under the hood or on the frame will likely need to be replaced, so plan on installing fresh radiator hoses, engine mounts, and suspension bushings.

The good news is that even though old trucks need a fair amount of attention, they’re famously easy to work on. Unlike modern trucks that are a rat’s nest of wires, sensors, and electrical components, classic trucks are bare-bones machines that can be completely disassembled and put back together with basic hand tools. There’s plenty of room to work, too. Older engine bays are wide open, and the height of four-wheel-drive trucks makes it easy to crawl underneath and perform regular maintenance without a lift—which is critical it your truck breaks down in a remote area. You don’t want to jack up your vehicle on the side of a mountain if it can be avoided.

One of the biggest benefits of owning a classic truck is the wealth of accumulated knowledge in the truck community. No matter which one you buy, there’s bound to be an online forum where you can find information about common issues, repair tutorials, and replacement parts. It’s not as easy as dropping your truck off at the dealership, but it’s a whole lot cheaper—and fun, if you’re into that sort of thing.

I recommend picking a classic truck that was good to begin with and has extensive parts support. Old Chevrolet K10s have both bases covered better than just about any other classic truck.

Chevrolet didn’t always use the current 1500, 2500, and 3500 distinctions for its trucks. They used to sell a C10, C20, and C30–or, in the case of four-wheel-drive trucks, K10, K20, and K30. The K10 is a classic truck with timeless looks and rugged work-truck credentials to keep you moving. Aftermarket options are plentiful, and there’s a selection of kits for just about everything from interior amenities to engine swaps. These trucks are also among the easiest vehicles to work on, so DIY maintenance will be a snap.

These square bodies come from an era when rust prevention wasn’t great, so you’ll have to do some digging to find a clean truck. Four-wheel-drive trucks tend to be more affected by rust than two-wheel-drive trucks, since 4WD was more popular in cold areas where the roads were salted in winter.

Ford’s F-150 seems to get all the love (maybe deservedly so), but its Super Duty trucks should be just as high on your shopping list. The pre-Powerstroke F-250 and F-350 trucks built from 1983 through 1987 came with engines that have become icons in the diesel community.

The naturally aspirated 6.9-liter IDI V8 generates very little power compared to the turbocharged alternatives of today, but it has a reputation for being incredibly reliable and can tow quite a load. The rest of the truck is classic Ford: great lines and a functional interior. If your style of adventure involves a camper, bass boat, or portable blind, this could be the perfect tow rig for you.

If you do your own maintenance, owning your first diesel can be a learning curve. These trucks are simple enough to work on, though, so that’s no reason to be scared off. The only issues tend to be minor problems associated with glow plugs and block heaters that can be solved by upgrading to parts from a later-model truck with the 7.3-liter engine.

The Toyota Tacoma is such a mainstay in today’s truck market that it’s hard to believe there was a time when the Japanese manufacturer didn’t even bother to name it. It was sold simply as the Toyota pickup, and model years 1979 through 1983 were some of the best built small trucks.

Toyota started offering four-wheel drive in its pickup in 1979. These trucks also have solid front and rear axles that are fantastic off-road, and one of three four-cylinder engine options (plus a fourth sold only in Japan). Early engines are carbureted, and later ones use fuel injection. These trucks are incredibly easy and inexpensive to repair and modify. The front and rear differentials are even interchangeable, so finding replacements is twice as easy.

Almost all of the pre-Tacoma trucks came with a manual transmission, so you better be comfortable shifting your own gears. Because the Toyota pickup was so capable off-road, many have been heavily modified and will have signs of hard use. Don’t expect a show truck or luxurious daily driver. Still, I can’t think of many trucks that are better for slipping between trees and crawling over rocks on the way to a remote hunting spot.

Toyota aficionados might point out that the FJ60 Land Cruiser was marketed as a wagon, but its status as an off-roading classic is undeniable.

This Land Cruiser has a fully-boxed frame, four-wheel drive, a low-range transfer case, solid axles, and locking hubs. The 2F engine, a 4.2-liter straight-six, doesn’t make much power but it’s known for being bomb-proof. Stock FJ60s have about 7.5 inches of ground clearance, but most of the ones you’ll find on the used market have been modified with taller suspension and larger tires.

Overheating has been known to warp heads, but there are fixes and replacement parts available. Leaf springs get the job done, but this isn’t the luxury yacht that later iterations of the Land Cruiser became. The biggest barrier to buying an FJ60 is probably going to be the cost. Cars from the Radwood era (1980-1999) are experiencing a bit of a renaissance, and clean Land Cruisers are going up in value.

If you like to venture off the beaten path, you have to at least consider a Subaru BRAT (bi-drive recreational all-terrain transporter). This strange little vehicle was born of a 1963 agriculture tax and ended up becoming a cult classic.

The BRAT could be considered the original urban hunting truck. Long before the Ford Maverick and Hyundai Santa Cruz, the BRAT brought all-wheel drive and an open bed to city-dwellers who needed a truck that wasn’t a liability in cramped streets and parking garages. It’s very small, only seats two people, and doesn’t even crack 100 horsepower. Still, it can get you to the deer stand and back with all your gear and a dead whitetail in the bed.

Aggressive off-roading is inadvisable and towing is out of the question with the Brat. Your best bet is to use it as a weekend hunting or fishing truck and leave serious hauling to something else.

In my used truck roundup, Ford landed this spot with its racing-inspired Raptor. There wasn’t anything comparable back in the ’60s and ’70s, but the Chevrolet El Camino cemented its status as a classic sport truck in other ways.

Like the Brat, the El Camino was created to skirt the rules; specifically, insurance premiums levied against muscle cars. Chevy’s solution was to offer what was essentially a Chevelle with a truck bed. The El Camino even came in an SS trim with the highly desirable 454 V8. The low ride height makes loading and unloading gear a breeze, and the bed is larger than what most modern trucks offer.

Before you put down money on one of these, remember that the El Camino is really a muscle car disguised as a truck. The drivetrain is strong but it was never intended for off-road use. Plan on sticking to paved roads or well-maintained dirt roads. The SS badge will cost you a pretty penny, so look for lower-trimmed vehicles to save money without losing the classic muscle truck experience.

FAQs About Buying a Classic Truck for Hunting

How much does a classic truck cost?

Classic trucks cost as little or as much as you’re willing to pay. Scan your local classifieds to find all kinds of derelicts, half-finished projects, and trucks that “ran when parked” for a few grand or less. On the other end of the spectrum are hand-built resto-mods that cost as much as homes.

Ultimately, how much you spend should be inversely proportional to how handy you are with a wrench. There are fantastic bargains and opportunities for customization to be found, but only if you know (or are willing to learn) your way around a garage. If you want a truck that’s ready for hunting season the day you buy it, raise your budget accordingly.

Will I have to work on an old truck?

Yes, old trucks need work. Everything on a vehicle that’s made of rubber (bushings, hoses, gaskets, seals, and more) will need to be replaced eventually. Various systems may not be working properly. You’ll have to brush up on things like carburetor jetting and valve lash. The good news is that working on older vehicles is much easier than dealing with the nervous systems that are modern electronics. Newer cars will need little to no maintenance, but heaven help you if one of the sensors goes out.

How do I pick the best model year?

You will want to do some digging here. Every model year of every vehicle has known issues, and some are worse than others. Dive into online forums dedicated to the trucks you’re interested in or swing by your local mechanic’s garage with a 6-pack to identify common issues and potential solutions.

Should I get an old truck or a new one?

In the situations hunters commonly encounter, older trucks are often are just as capable as modern ones. I know new trucks are generally more powerful, efficient, comfortable, and safer than classic trucks, but you don’t necessarily need all those things. We pay for them because we want them. Every year, manufacturers drop commercials of their newest trucks tackling the worst terrain to prove how tough they and well-built they are. Every day, people like you and me run those same trails with rusted-out 4x4s that burn more oil than a two-stroke engine. We do it without the same luxuries you will find in a $60,000 vehicle, and it works just fine.