Is the Toyota Tacoma a Real Hunting Truck?

Toyota's flagship mid-sized truck is the most popular in its class, but outdoorsmen should do their research before buying one 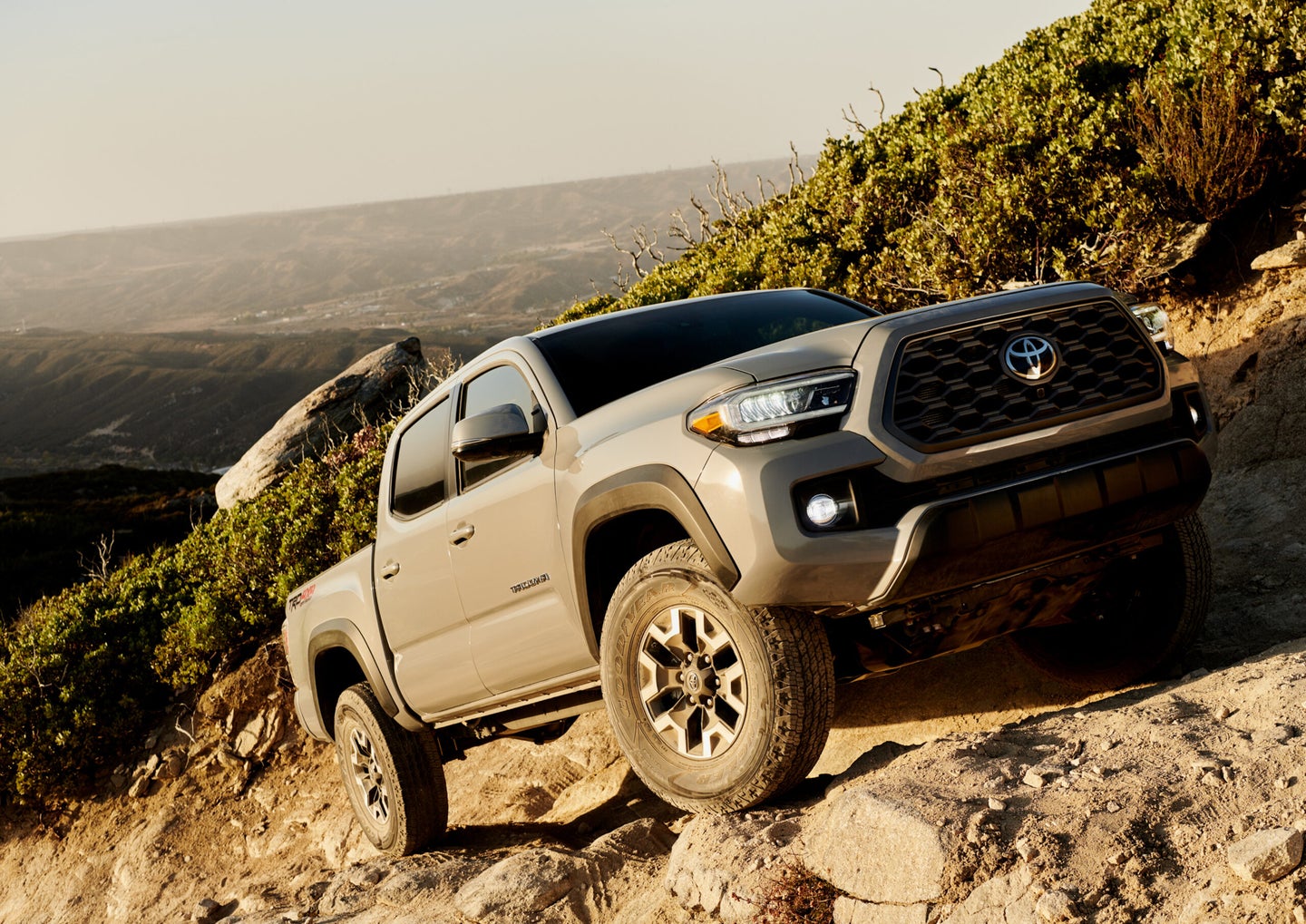 If you're looking for a vehicle with a high payload and tow capacity rating, the Tacoma is not your truck. Toyota
SHARE

Two million. That’s how many Tacomas have been purchased by U.S. car buyers in the past decade, making it the No. 1 mid-sized pickup in the country. The marketplace for mid-sized trucks is fairly crowded these days with a few domestic contenders (Chevy Colorado, GMC Canyon, Ford Ranger) creeping up the sales charts and taking a bite out of the Tacoma’s market share. Still, Toyota dealers sold 248,000 Tacomas in 2020.

Introduced in 1995 as a replacement to the longstanding Toyota Pickup, the Tacoma appeared as a larger, more refined, and more comfortable truck that better fit the needs of the average consumer. In the same swing, it stepped away from the foreign-market Hilux truck’s rugged nature, choosing to approach its target audience as a daily driver built for work and play.

The 2021 Tacoma is the fifth model year of the third-generation of Tacoma, first released in 2016. The two previous generations of Tacoma lasted around a decade, so we likely won’t see an all-new model until around 2025 if Toyota sticks to its habits. The 2016 model was a fully reworked truck, built on a strengthened frame with many more modern convenience features and better road manners than the previous generation. It still suffers from the same problem as the first and second generation Tacomas: You can nearly max out the vehicle’s payload rating without actually loading any gear in the bed of the truck.

The Tacoma Can’t Handle Much Weight

A truck’s maximum payload is determined by taking the manufacturer’s gross vehicle weight rating and subtracting its curb weight. GVWR is a calculation of the maximum weight a vehicle can safely operate without damaging its components or becoming unstable during normal travel. Curb weight is typically defined as a vehicle’s weight when full of fluids and ready to drive, minus any passengers or cargo. Depending on how your Tacoma is configured, it can achieve a maximum payload of 1,685 pounds. To get there, you will need a regular cab, two-wheel drive, and a four-cylinder engine—not exactly ideal for the average outdoorsman’s dream truck. When optioned up to the SR5, TRD Off-Road, TRD Pro, or other 4WD trim levels, payload drops to around 1,155 pounds.

Eleven-hundred pounds may seem like a lot, but payload refers to any weight you add to any part of the vehicle. Now, let’s just say you want to add larger, off-road tires, which are heavier than the stock rubber. The weight difference comes out of your payload. Leave your tow hitch in? Subtract 10 pounds. Passenger weight also comes out of total payload.  By the time you fill the seats with passengers and their personal belongings, your average payload capacity for gear in the bed is going to be around 300 to 400 pounds. To put that in perspective, most UTVs can haul more weight than that.

The Tacoma’s lower payload capacity is a direct result of its design as a multi-tool rather than a purpose-built truck. It was built for a comfortable ride, good road dynamics, and soft suspension. It lacks the work-hardened carrying capacity of its overseas contemporary, the Toyota Hilux. Available only outside the U.S., the Hilux pickup can tow up to 7,700 pounds (the Tacoma maxes out at 6,800 pounds) and carry between 1,600 and 2,200 pounds of payload depending on options. The two vary in design philosophy, but are very close in size.

The Tacoma Offers a Smooth Ride, But a Sub-Par Tow Rating

The modern Tacoma comes in five- or six-foot bed sizes, with access cab or double-cab configurations. The single-cab model was dropped from the Tacoma lineup in 2016 when the third generation went on sale. Available in two- or four-wheel drive, with four- or six-cylinder engine options, there’s a Tacoma for almost any buyer. Those who spring for the top-level TRD Pro trim get niceties like locking differentials, sophisticated off-road traction control and computer-aided driving systems, upgraded shocks for a better ride, and more.

In the middle of the pack sits the TRD Off-Road trim. This is my pick of the litter, as it functions as a great on and off-road vehicle to get you and a small amount of gear pretty much anywhere you need to go. It keeps the lockers and some of the electronic off-road modes from the TRD Pro, but with fewer options, and costs around $10,000 less. That big chunk of cash will give you flexibility when upgrading your own truck, should you want to.

The TRD Pro comes with plush-riding Fox 2.5-inch internal bypass shocks, and that ride can be replicated in the aftermarket if you aren’t completely satisfied with the ride of your TRD Off-Road Tacoma’s Bilstein dampers.

Part of the Tacoma’s charm is its soft ride when traversing rocky or root-strewn trails. Soft suspension kills tow ratings, which is why the Tacoma can’t match the Chevy Colorado or Ford Ranger’s towing numbers. It can still pull around 6,500 pounds depending on options, so long as you don’t mind doing it fairly slowly. With a maximum of 278 horsepower and 265 foot-pounds of torque, the Tacoma generates enough horsepower to get around with ease—until you need to pull something heavy.

So Why Is the Tacoma So Popular with Hunters?

The Tacoma’s two top selling points have nothing to do with payload, horsepower, comfort, or off-road prowess. The Tacoma earns its top spot for two user-polled bests: reliability and resale value. Buying a Tacoma is a smart purchase if you want a truck that hardly ever breaks down. Many Tacoma owners only ever pay for fluid changes, new brakes, and tires. They’re that durable. Tacomas are also an appreciating asset in today’s market. I ran a few online searches, and there were 677 Tacomas for sale on autotrader.com that were all priced over $47,030—that’s the MSRP for the highest-optioned 2021 TRD Pro Tacoma. Lightly-used 2021 TRD Pro models are listed for $60,000 to $65,000, which is almost $20,000 over sticker price. If you bought a Tacoma at or near MSRP last year, your truck is now paying you to drive it.

Reliability is perhaps the Tacoma’s top virtue, but 2016 and newer third-generation trucks with the six-speed automatic may start tainting that reputation. Many owners report drivability issues with the newest automatic transmission, which is unfortunate considering the rest of the truck is bulletproof. Regardless, Toyota has no problem finding buyers, and it seems as though the transmission issues are more of an annoyance—that can be fixed with further calibration—than a reliability issue.

If you’re looking for a used Tacoma, aim for a second-generation Tacoma around 2014, as those trucks benefitted from 10 years of design developments before the redesign in 2016.

For us hunters who prefer to spend most of our time outdoors, but don’t need to trailer or weigh our truck down with heavy loads, the Tacoma is a great option. While it was never built to tow or haul like an F-series pickup, Ram, or Silverado, the Tacoma presents a smaller, more convenient footprint. It’s cheaper to maintain and fuel than a full-size pickup. You can also drive it in the city as it fits in more parking spaces and can get down narrower trails without bushes pinstriping the exterior. Interior volume in the double cab models feels monumental, with a ton of room in the airy cab and a comfortable back seat capable of housing full-sized adults (just not too many because the payload rating is sub-par). What the Tacoma lacks in work prowess it makes up for in road manners and practicality.

Is the Tacoma right for you? That depends. If you need to haul a lot of gear consistently, then no. But if you want to throw your trekking poles, gun, dirt bike, mountain bike, or a bow into a truck and go enjoy the outdoors, then it’s a fine option. Just remember: The more gear you load a Tacoma down with, the fewer hunting buddies you can bring along.