More Americans want an SUV that can play in the city and the backcountry, and the 4Runner Trail SE delivers 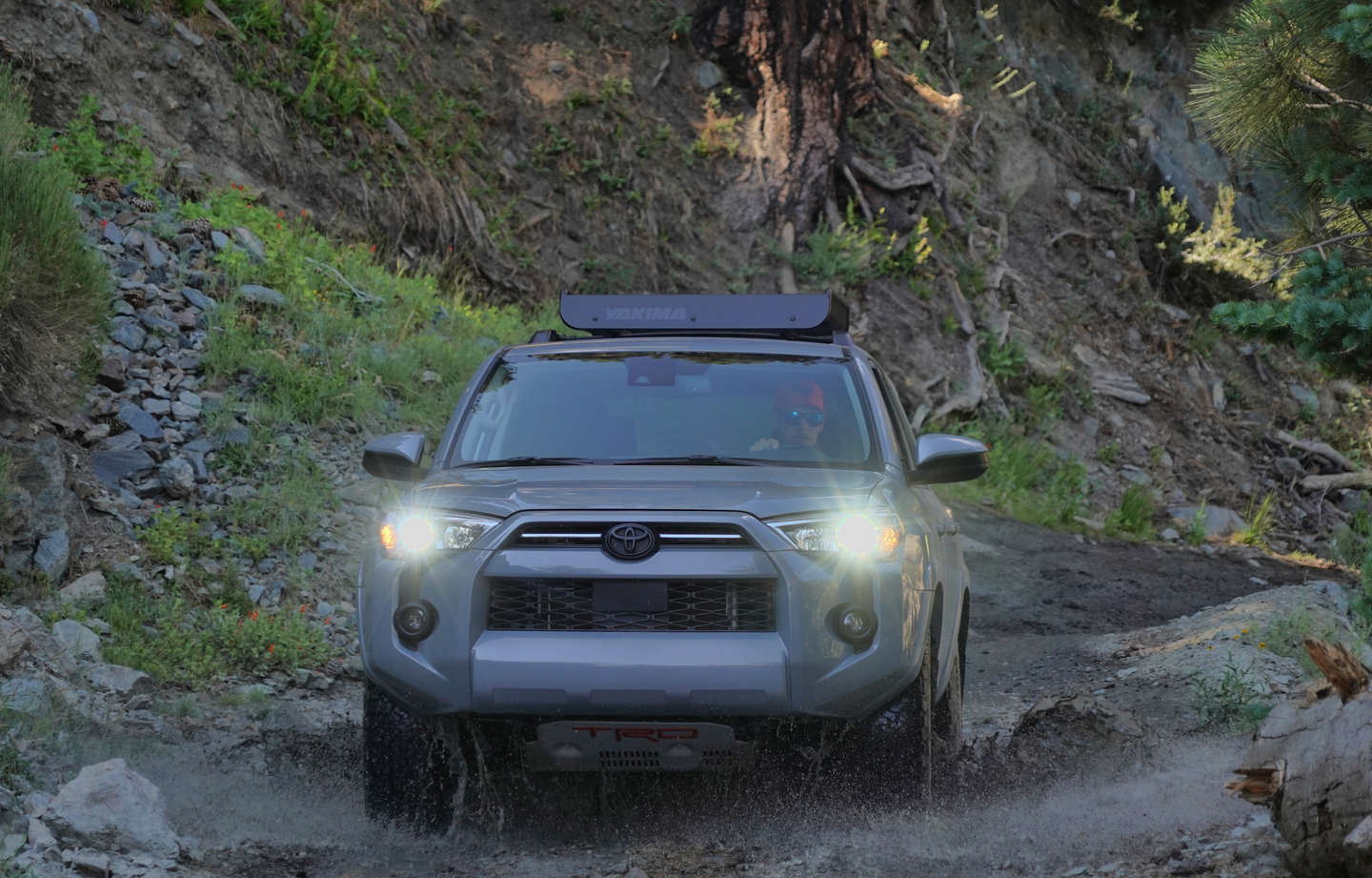 Toyota’s 4Runner is driven by its reputation of decades-long durability and its functionality as an everyday driver with off-road capability. Moreover, the 4Runner is also a superb gear-hauler, and go-anywhere SUV, particularly with this new trim, the 2021 Trail Edition. This makes it a solid choice for anyone who enjoys spending time outdoors. The Trail SE makes accessing remote sections of terrain easier while maintaining a high level of comfort for driver and passengers.

I had the chance to test the newest edition of the 4Runner in the hills and desert of southern California. Here is how it stacked up against some daunting terrain and intense heat.

The History of the 4Runner

Toyota is now into its eighth model year of the fifth generation 4Runner. The car manufacturer still sells about 125,000 of them every year. The 4Runner began its life in 1984, when Toyota reshaped some body panels and attached a fiberglass top to their unkillable Hilux pickup. The first-generation 4Runner was much like the Jeep Wrangler and Ford Bronco in that it had a removable canopy, which changed in 1989 with the introduction of the second-generation 4Runner. From its onset, the 4Runner was comprised of a body-on-frame construction reminiscent of a pickup truck. Toyota still employs this design philosophy today, which is why the 4Runner is still largely considered to be the tough SUV it started off as.

The Benefits of the 4Runner Trail Edition

Five generations of refinement have turned the modern-day 4Runner into a popular do-all SUV. Extra-thick sound insulation in the fenders dulls the hum of the large off-road tires on the freeway. Radar cruise control and automatic emergency braking make your daily commute a little less jarring. Five of the seven windows in the 4Runner roll down electronically, including the large glass in the rear liftgate. While this 4Runner is not considerably different from the standard model, it has benefitted from the inclusion of modern technology.

The 4Runner Trail Edition I tested costs around $43,000, while the highest-priced TRD Pro models come in at over $53,000. For that extra $10,000, you get upgraded interior materials, some upgraded off-road electronics and mechanical bits, and a nicer suspension system with Fox shocks tuned for a more capable off-road ride.

This Trail SE 4Runner is one of the more affordable versions that still retains great off-road capability. Based on the spartan off-roader SR5 trim, the Trail Special Edition adds the following:

The 4Runner Is Spacious and Built to Climb

It still retains the easy, knob-activated 4 wheel drive selector, which features high and low range. The 4Runner is a remarkable climber in 4-wheel drive, but we wished for locking differentials in a couple of places. Regardless, the 4Runner is more adept at off-road travel than any other full-bodied (non Wrangler or Bronco) SUV I have driven lately, which means that it will take you and all of your gear pretty much anywhere you need to go. Toyota makes this even easier on 4Runner owners by offering a massive 89 cubic feet of storage space with the rear seats folded down, or enough room for two full-sized adults to sleep side by side. It also comes with this neat rolling cargo tray on most five-seat models, which allows you to load up to 440 pounds of cargo on it and slide it out the back of the SUV for easier access to your gear. This was by far my wife’s favorite feature, and something we both used repeatedly during our time with the 4Runner.

One of the 4Runner’s strongest advantages off-road is its size—it is roughly five inches narrower than a full-size pickup truck. This may not sound like much, but on some trails it will matter. The 4Runner still drives like a truck on-road, as it has yet to lose its gruff nature in terms of handling and roadholding. This is still a vehicle built to spend a lot of its life far from asphalt and concrete, made evident by its beautifully smooth ride quality over small rocks, roots, and trail debris. This translates to a very comfortable ride and decent street manners, but the off-road tuned suspension delivers plenty of dive, squat and body roll. While you won’t be winning any races through a winding mountain road, you will be extremely comfortable traversing steep driveways at speed, cruising through intersection drainage dips, and rolling over broken pavement. The 4Runner’s plush suspension soaks up all but the largest of bumps.

A Look Under the 4 Runner’s Hood

The Trail Edition drivetrain architecture follows the same formula as the rest of the 4Runner lineup. A 4.0-liter, dual overhead cam V6 with dual variable valve timing is bolted up to a torque-converter equipped 5-speed automatic transmission. The 4Runner has had this same combination since 2004, although both the engine and transmission have received upgrades and generational changes as the years have progressed. The 4Runner engine is capable of producing 270 horsepower, 278 foot-pounds of torque, and all the way up to 4,400 RPMs. The V6 is very tame and smooth in the lower third of the rev range. This translates into buttery-smooth operation at low speeds, again showing that Toyota really tuned the 4Runner for its intended audience. Out in the dirt, this means that your ride up steep inclines, through streambeds, and over rocky trails won’t be wrought with head-tossing from an overly sensitive, jumpy engine calibration. The 4Runner is a smooth operator, on and off-road.

The 4Runner thrives in a variety of areas. It offers a great ride and is a versatile SUV for wide variety of potential buyers. Here are a few more areas where the 4Runner shines:

Every truck has its flaws, and the 4Runner certainly had a few. Here’s were Toyota’s SUV needs some improvement.

Read Next: The Best Trucks and SUVs for Hunters Who Live in the City

How to Configure Your 4Runner

The Trail Special Edition is the best choice for outdoorsmen. It packs just the right amount of comfort and convenience features to merit using it as a comfortable daily driver, road-trip companion, and off-road truck. It’s a reliable, do-all vehicle that will outlast most competitors. It is bank-vault quiet inside, rides beautifully, and has perfectly-calibrated controls for its mix of on- and off-road duty.

If you are looking for a little more upscale to go with your dependable 4Runner, the TRD Pro is where you should look. Although there are a few trim models between the Trail and TRD Pro, these are the only two geared towards serious off-roading besides the base-model SR5. The TRD Pro features Fox brand shocks with TRD springs, offering a slight lift that improves ground clearance and bump compliance off-road. It also comes with a TRD cat-back exhaust, upgraded HVAC controls, standard moonroof, JBL Audio system, front skid plate, a locking rear differential, and more valued options for backcountry adventure.

Having access to this 4Runner for two weeks really made me realize just how much more time I can spend in the outdoors if my primary vehicle was this capable. When your SUV drives just as well on dirt as it does on hard surfaces, there’s no reason to buy one for play and one for daily commutes. The 4Runner is a great tool for getting into the backwoods, and it’s one you can rely on to return you back home every time. As more folks in urban areas seek outdoor opportunities, it only makes sense that they buy vehicles capable of living well in both worlds.