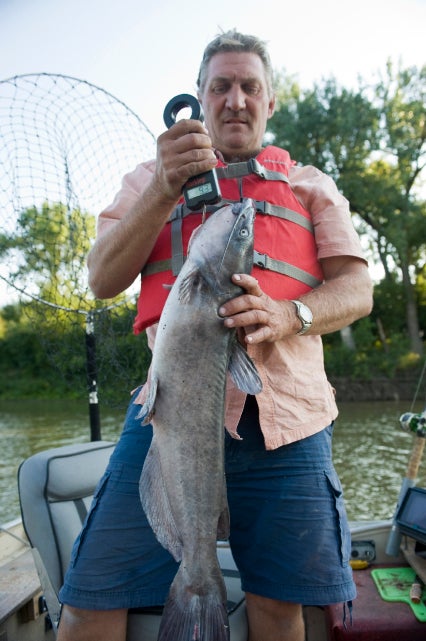 Best Fish Scale: Fish Weight Scales You Can Rely On

Show a photo of your trophy fish to friends and family and the first question is, “How much did it weigh?” Without an accurate fish scale, your best answer is just a fish story. The best fish scales come in a variety of sizes and with multiple features to accurately weigh and measure your catch.

The millions of anglers who practice catch and release fishing need a way to measure the size of their fish without harming it, and the latest generation of fish scales allow just that, and there are many types. Portable and mini fish scales fit in a tackle box or a jacket pocket. Digital fish scales have a readout in pounds and ounces or kilograms, and are backlit to easily read day or night. Some fish scales store individual weights and total bag weight in their memory, which is great for tournament anglers fishing for a winning stringer. For quick measurement before release, look for a fish scale that doubles as a fish gripper. A mechanical scale doesn’t require batteries so it is always ready to go.

The best fish scale should accurately measure weight without injuring the fish. A scale with a gripper that gently pinches the fish’s lip does just that. It should be easy to read so the fish can be released quickly. Look for a scale that is small enough to fit in a tackle box, while still large enough to display multiple layers of information.

The scale should store weights of multiple catches so an angler can keep track of the total weight of the fish caught that day. To weigh fish and cull them quickly, the controls should be intuitive, and easy to operate with wet, slimy hands.

The Rapala High Contrast Digital Scale remembers up to eight fish weights and displays fish weight and total weight of all fish weighed on the scale. The display is easy to read with large white digits against a dark background. The Rapala scale even displays outside temperature. The plastic fish grip holds the fish lip tight without injuring the fish. To weigh big fish meant for the fish box, the Rapala scale also has a hook that can be inserted under the gill plate.

Do you need a pocket scale to take anywhere?

Kayak anglers, shore anglers and wade anglers don’t have a lot of space for gear but they still want to weigh their catch. That calls for a pocket scale that’s easy to take along. It should be water resistant and tough enough to get thrown into a fishing backpack or tossed into a kayak hatch.

Small enough to keep on hand when a trophy fish hits the deck, the Rapala Mini Digital Scale is a digital pocket scale that’s water resistant and accurate, with readouts in both pounds and kilograms.

Are you looking for a traditional spring scale?

Old school anglers know a spring scale is most reliable. Small, light and tough, a spring scale (also referred to as a mechanical scale) doesn’t require batteries and won’t short out. Whether the scale uses a radial arm like a clock or it is a simple tube scale, a spring scale is old technology that is still relevant. In addition to weighing fish, a tube scale is great for setting the drag pressure on a reel. Drag is measured in pounds of pressure required to pull line off the reel. To measure drag, put the rod in a rod holder, set the drag on the reel and attach the scale to the end of line. Use the scale to pull the line until the drag releases line. The weight displayed on the scale as line is released is the setting of the drag, which you can then adjust up or down.

The classic mechanical scale was in your granddad’s tackle box, and its easy operation, reliable performance, and dual use has made it a part of many modern tackle boxes.

With a solid brass body and stainless hook and hardware, Manley’s Brass Scale is always ready to weigh a trophy catch. The Manley is one of the most popular scales with professional anglers who rely on the scale to both weigh fish and accurately set drag pressure.

Do you need a fish gripper that weighs fish?

A fish scale with a fish gripper provides several advantages. It allows an angler to  land, weigh, photograph, and release a fish with one tool. It also lets you do all this without touching the fish. That’s important for the fish to retain its slime coating if you’re going to release it, because the slime provides a protective barrier. Fish grippers also allow you to land and weigh fish with sharp teeth, without getting your hands near its mouth.

Ego’s Kryptek Ultra Grip with Scale is lightweight and compact with enough power to handle a fish up to 50 pounds. Kryptek fish camo gives the Ego gripper a modern look that fits in on saltwater and fresh. Open the jaws with a trigger lever to operate the gripper with one hand.

Fish scales that cost less than $12

Not every angler has a ton of money to drop into a digital scale full of functions, but a good scale is a must-have for serious anglers. Look for a digital scale with a large readout (good for photos!) and a tare function, so you can get the true weight of a fish even if you use a fish gripper.

The Quarrow Digital Angler’s Scale weighs fish up to 110 pounds. It has a large digital display and a tare function, which will account for the weight of a fish gripper or other device if necessary. It’s small enough to fit easily inside of a tackle box.

What you need to know about fish scales.

Q: How do you choose a fish scale?

Figuring out how to choose a fish scale isn’t hard. First, ask why are you weighing a fish? A tournament angler culling bass to put the biggest five fish in his live well needs a fish scale that saves multiple fish weights and provides a total stringer weight. To weigh fish for bragging rights, a simple spring scale is reliable and easy to store. If the fish will be released, use a fish gripper that won’t harm the fish.

Q: Why do you need a scale that stores weight

Many bass tournaments require anglers to weigh live fish. To do this, the angler keeps their catch in a live well. During the day, the angler will trade larger fish for smaller fish to improve their total stringer weight. A scale that saves weights and calculates total weight allows the angler to keep track of each catch, and the total weight.

Q: How accurate are fish scales?

Handheld fish scales are less accurate than a hanging fish scale. As the fish flops and the fisherman rolls with the waves, the weight may change. Digital scales are more accurate than mechanical scales. A spring scale may be affected by humidity and temperature, and the mechanical parts are more likely to corrode or suffer damage. Also, the LCD display on a digital scale is easier to read than the dial on a spring scale.

A Tip for Using Fishing Scales

If you are keeping fish for the table, weigh them as soon as they are caught. Fish in a cooler will lose weight over time…and you and everyone else might as well know the heaviest possible weight of your fish.