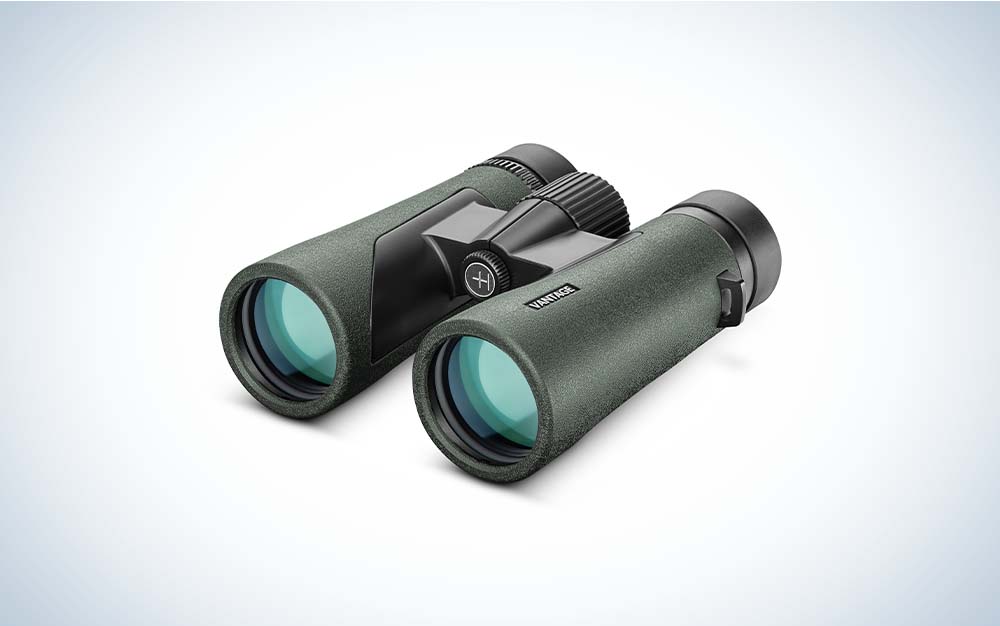 The Vantage binos are great options for entry-level hunters and birders, or good backup options for a pickup, boat, or deck window. Hawke
SHARE

In a previous post, I noted the wave of low-power riflescopes flowing out of optics brands this year. I alluded to the lack of introductions in other optics categories such as binoculars and spotting scopes. But some categories are stronger than others. Laser rangefinders, in particular, are having a good year. And as thermal sights and handheld viewers somehow slide into normalcy, there are a few standouts to mention in what we might as well start calling the electro-optics category.

It’s worth mentioning that this is the first year in memory that a flagship binocular hasn’t been introduced at SHOT Show. There’s a remarkable Leica Geovid to discuss, but it’s less a binocular than it is a laser rangefinder, ballistic calculator, and digital map all tucked under its elegant hood. But no flashbang new binos from the brands you might expect: Swarovski, Leupold, Vortex, or Zeiss. I don’t recall seeing any new spotting scopes at this year’s SHOT Show either.

But it’s not all gristle. You’ll see meaty optics introductions from Hawke, Vanguard, Bushnell, and Meopta, among other brands.

Leica has sized down while somehow expanding the capabilities of its flagship rangefinding binocular, the Geovid. Now available in an 8x32mm version, the new binocular combines best-in-class optics and a more powerful processor with a whole suite of ballistics and mapping capabilities.

The Geovid retains its distinctive banana-shaped frame that accommodates its Perger-Porro prism, a design that gives the bino a wider field of view and better edge clarity than many of its competitors. The open-barrel design also allows for easy one-hand operation, and the smaller 32mm frame is wonderfully agile. Combined with close-in ranging (as close as 10 yards), this is an excellent choice for bowhunters, a market missed by the bulker, heavier 42mm Geovid.

Additionally, Leica has baked into this model Bluetooth connectivity to a better version of its ballistic app and GPS-powered geo-locating capability that mates with any number of digital mapping services. In practice, that means you can range a target, save the waypoint, and then connect to a mapping app that will show that specific location on a digital map, enabling shooters to better recover game, triangulate between landmarks, and share waypoints with hunting partners. The Geovid also has a digital compass that can help users find their way home. The new Geovid also connects to Leica’s ballistic app so you can use standard and custom ballistic data.

Leica isn’t the only brand with a sized-down rangefinding binocular. German Precision Optics has come out with 8×32 and 10×32 versions of its RANGEGUIDE, previously available only in 10×42.

These are not electro-optics. There’s no Bluetooth connection or on-board ballistic app. Instead, you get a straight-ahead laser rangefinder that’s capable of ranging reflective targets out to 3,000 yards.

Bushnell has a new laser rangefinder that, if the name didn’t give it away, is configured for bowhunters. The Broadhead follows the trajectory of Primos’ The Truth ARC (Angle Range Compensation) with Bow Mode that allows bowhunters to range obstacles in the flight path of their arrow, detecting a limb, for instance, that might deflect an arrow.

The Broadhead has that same ARC technology that accounts for terrain angle. It’s also one of the most precise short-range rangefinders on the market, with a stated accuracy of .3 yards out to 150 yards. It features the ACTIVSYNC display that morphs from black to red as light fades. Other features include a brighter image thanks to optical glass, a threaded tripod mount, and hand-gripping contour.

In a duel of bowhunting-friendly rangefinders, Leupold has introduced its RX-FullDraw 5, a fully equipped unit that’s configured for short- to medium-distance ranging. Features that will appeal to bowhunters include Leupold’s Flightpath technology that uses ballistic calculations to determine if your arrow will clear obstructions between you and your target.

The FullDraw uses calculations determined by Archer’s Advantage software to allow users to determine holds based on their own arrow dynamics and angle and distance of the shot. Updates to the new unit from its predecessor, the RX-FullDraw 4, include an optional 20-yard pin solution for the Flightpath technology, a rain/fog mode, and a lower minimum arrow velocity so it can be used with traditional and youth bows.

The next-generation versions of Meopta’s excellent MeoPro HD binoculars are available in a 10×42 and a massive—and extremely bright—8×56 configuration. Both feature upgraded optics and coatings from their predecessors in the MeoPro line. Other updates include a smoother and more precise focus wheel, grippier armor, and durable but comfortable rubber-on-metal eyecups.

The 8×56 configuration borrows heavily from Meopta’s European roots. The binocular, with a massive 6.7mm exit pupil, may be the best expression of the last few years of a capable low-light hunting and observation optic.

Hawke is making a move to entry-level optics buyers with its new Vantage line, full-featured binoculars that retail for well under $200.

The Vantage binos are available in 10×42 and 8×42 configurations. Both feature Hawke’s System HS Optics, which deliver good clarity and brightness, and the products are covered by Hawke’s no-fault lifetime warranty. These are great options for entry-level hunters and birders, or good backup options for a pickup, boat, or deck window.

Pulsar introduced what might be called a starter thermal scope. In its Talion XQ38, shooters will find a moderately sensitive 384×288 sensor, 2.5- to 10x magnification, and a 1,400-yard detection range. It’s a thermal scope for those who don’t need rangefinding capabilities or a whole suite of other imaging options.

Instead, you get a whopping 9 hours of run time on a single charge, a tactile focus wheel that users can operate capably in the dark, and on-board video and image recording. But at around $3,000, this is about half the price of Pulsar’s flagship thermal scopes.