Bowfishing Basics: 6 Tips to Get Started

Jump into this warm-weather bowhunt with advice from Beka Garris 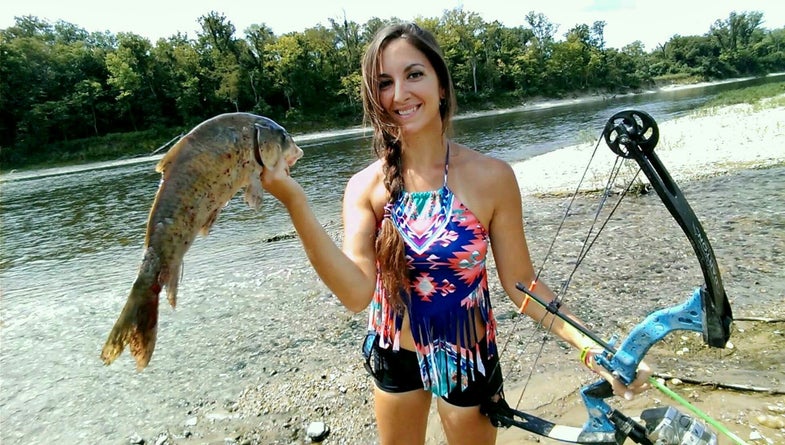 Beka Garris is a diehard when it comes to bowfishing. Beka Garris
SHARE

If you’re an avid bowhunter, the spring and summer months can be excruciating. Flinging carbon at foam in preparation for a season that remains months away can get downright dull. Fishing helps scratch the outdoor itch, but nothing compares to shooting your bow.

That was my attitude until about four years ago. That’s when, during a particularly slow summer, I decided I would teach myself to bowfish. It quickly became my passion and now summers don’t last nearly long enough. The rivers and creeks became my home away from home, and somehow I became known locally as “That Bowfishing Girl.”

I encountered innumerable surprises along the way—many of which I wasn’t prepared for, all of which I wish I had known about ahead of time. It’s time to learn from my mistakes.

Most people are under the impression that bowfishing must be an expensive sport. Fact is, it doesn’t have to be. My first setup only cost me about $30. Most of it was old equipment that my dad had lying around the garage. I started out bowfishing with a Browning youth model compound and a metal Bear archery hand reel from the 1970s. I shot as accurately and killed just as many fish with that bow as I do now with my upgrade. You can easily put together a decent bowfishing setup for about $120. Craigslist and eBay are a great source for used bows, as are pawn shops and yard sales. I’ve picked up several extra bows for $25 apiece off Craigslist. Just keep in mind you want the draw weight to be somewhere in between 25 and 50 pounds.

Depending on what type of reel you are looking to purchase, the price will vary. You can get a basic hand reel for $10, and the simplicity of these is great. If you’re looking for an AMS bottle reel or Muzzy spinner, you can pick up either of these with line for under $60. Fiberglass bowfishing arrows can run between $10 and $20 each, depending on the brand. Arrows and tips are one thing I don’t buy cheap, as they are the key to bringing your fish all the way in. When in doubt, go with a grapple tip.

2. Eat What You Shoot

Contrary to popular belief, many fish targeted with a bow are great to eat. Despite their somewhat hideous appearance, long-nosed gar taste great, especially their deer-like backstraps. They are easily my favorite to clean and cook. You must use caution when cleaning female gar, as the eggs are poisonous to all mammals. Take care to rinse the meat well. Gar skulls also make a killer European mount.

The idea of cleaning and cooking carp may not seem appealing, but I enjoy smoked carp which tastes a bit like beef jerky. Simple carp patties, made with ground carp, chopped onion, celery, lemon juice, egg, mayo, and seasonings are also good. Suckers are also tasty, and produce a flaky white meat with very little of the fishy flavor that is so often associated with freshwater fish.

Be prepared to miss—a lot. Because I share a good portion of my bowfishing adventures on social media, many people are under the mistaken impression that I don’t miss. Well, I most certainly do.

Aiming is the most difficult aspect of the sport. Light refraction on the water makes judging depth for precise aiming points a bit tricky. A good pair of polarized sunglasses helps for bowfishing during the day. A solid rule of thumb for beginners is to aim low. When I first started bowfishing, I would practice on water bottles and soda cans in the yard. Even practicing at small targets on land can greatly improve your shooting, and when teaching others to bowfish I found this is a great exercise.

Much like bowhunting, you want to make sure that you are consistent. Although proper form and follow through aren’t quite as important, being consistent when it comes to anchor point and release makes a big difference.

Legal harvestable species vary as well. Generally, invasives top the list. But in some areas, catfish, redfish, stingray, and tilapia are also legal. Some states list public areas where bowfishing is not allowed, while fishing with a rod and reel is no issue. Know your laws, obtain the legal license, and be respectful of those around you.

5. Rig For The Night

I have always preferred bowfishing in the day—I enjoy being on the water in the heat of summer, and getting a tan is an added bonus. However, bowfishing after dark may be more popular. The gameplan after dusk is a bit different.

Shooting from a boat creates options when it comes to mountable lights that can be secured out of the way of the action. If you are wading the shallows, however, you’ll need to plan ahead by bringing along a friend to act as a spotter, mounting a light on your bow, or wearing a headlamp. No matter which you choose, know that a bright light with a wide beam makes it easier to spot fish.

Finally, don’t forget bug spray or a Thermacell. Because lights attract gnats and mosquitoes, I always wear a bandana or buff as well.

I don’t have a boat, so I wade the banks of rivers and creeks. I quickly became familiar with the types of water that was good for bowfishing, as well as which species would inhabit the water. It is fairly easy to find good areas to bowfish once you know what types of fish are in your area. Dams and overflows are great places to find fish, particularly during the spawn.

Still, shallow pools with a muddy bottom usually harbor common carp. Freshwater drum tend to stay in deeper pools in rocky areas. Buffalo prefer moving water, and dozens of them will lay in the rapids in the middle of the rivers—sometimes making it easy to skewer two with one shot.

There are days when I simply hop out of my truck and shoot as many fish as I can from one pool, and there are days when I’ll walk a mile or two to find a five-foot gar or a monster grass carp. Much like hunting, sometimes you have to put in some legwork to find fish.