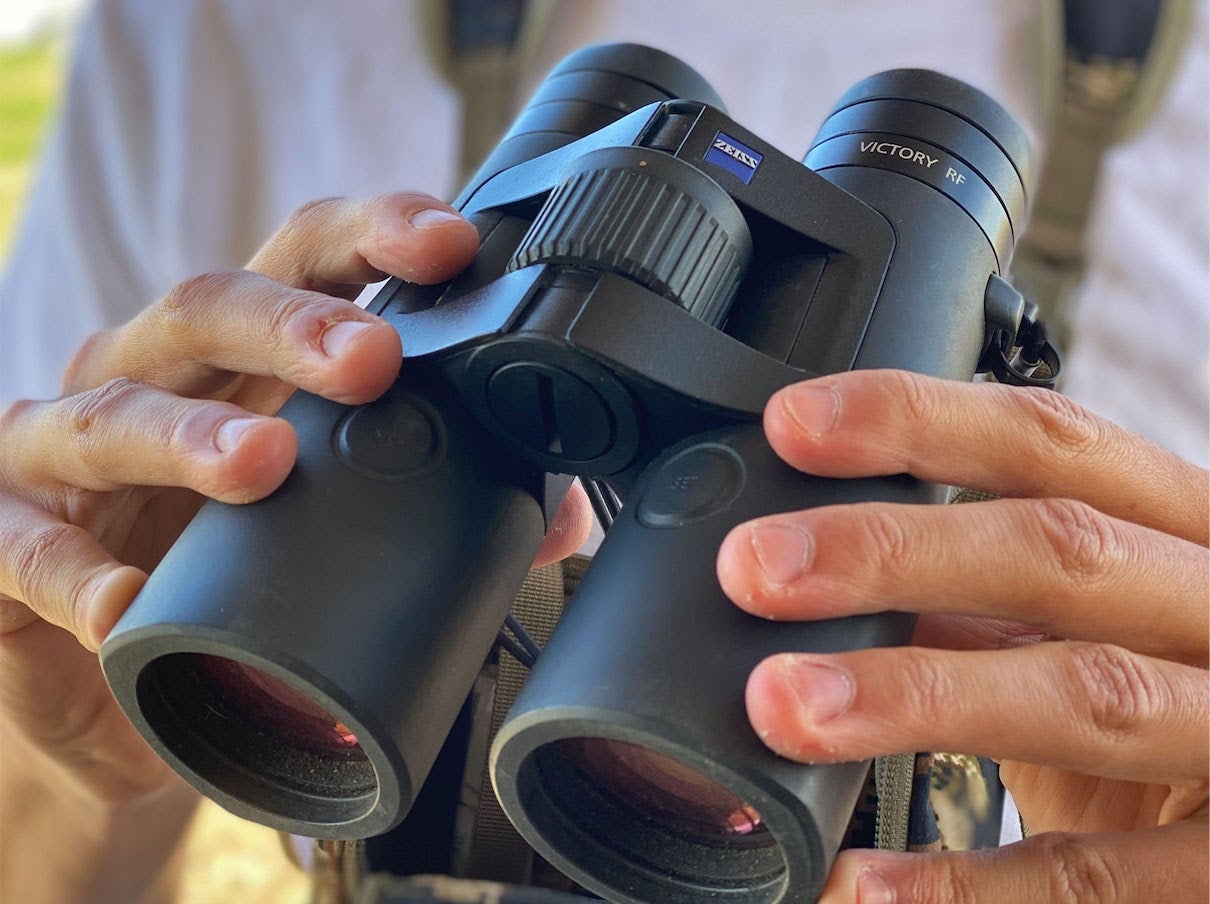 The Zeiss Victory RF is an elegant and powerful rangefinding binocular for hunters. Andrew McKean
SHARE

Zeiss’s bright, fast laser rangefinding binocular marries excellent optics with a serviceable laser rangefinder. Combined with a mobile app that allows users to transmit custom ballistics to the binocular through a Bluetooth connection, the Zeiss Victory RF binoculars are a good fit for most hunting scenarios and target shooting out to a practical range of about 1,200 yards.

At some point in a hunter’s life, often shortly after he or she misses a shot at a memorable animal, they seriously consider investing in a laser rangefinder in order to know precisely the distance to their target, thereby removing the main variable responsible for missing.

Happily, the market is full of functional hand-held rangefinders, and the best of the bunch allow hunters and shooters to input the ballistic data from a number of bullet types. Making one-shot hits with these monocular devices is as simple as ranging the distance, following the aiming prescription provided by the display, and then pulling the trigger.

That’s the idea, anyway. In the real world, the delaminating jitters introduced by buck fever make stabilizing a one-hand rangefinder difficult, and targets with four legs and a healthy fear of humans are not often stationary for long. Deploying aiming information on a moving target is a tough proposition for even veteran hunters.

After a few unexpected misses, savvy hunters often gravitate to binoculars with built-in laser rangefinders. By combining the electronic distance-measuring devices with a binocular, they can reduce both the game-startling motion and the inconvenience of glassing with binoculars, then finding their target in the narrow field of view of the monocular rangefinder, receiving the ballistic data, and then getting the target in the crosshairs of their riflescope. Wouldn’t it be nice to cut out at least one of those optical tools?

The best binoculars for hunting with integrated rangefinders do just that, and this relatively new category of sporting optics is quickly replacing both hand-held rangefinders and traditional binoculars for good reason: they work quickly and capably to make hunters and shooters more accurate.

Experienced hunters know the value of premium optics for finding and resolving details of distant targets, and also appreciate the benefits of state-of-the-art electronics in their rangefinders. Many of them have bypassed the crowd of entry-level rangefinding binoculars to invest thousands of dollars in the flagship products (the best hunting binoculars in this category are expensive, of course).

They have a lot to choose from. Leica, which invented the category, carries a few iterations of its venerable Geovid in its product line. Swarovski has its EL Range line. On the less expensive side of the European brands, Czech-made Meopta offers its adequate Meopro Optica LR.

But there may be no better combination of premium glass, fast and precise laser rangefinding, and state-of-the-art mobile-app technology in the service of accuracy than the Zeiss binoculars in Victory RF line.

Testing the Zeiss Victory Rangefinder in the Field

I’ve used Zeiss binoculars in the 10×42 Victory RF configuration for two deer seasons in my home in eastern Montana. The best testimonial I can provide is that I have sidelined my Zeiss Victory SF (non-rangefinding) binocular in favor of the RF. That SF has world-class glass and a bombproof (and dustproof) chassis that looks like a piece of functional art. But the RF is just as durable, it balances well, and the 34-ounce 10×42 model deploys nicely in almost all standard chest harnesses.

It’s the addition of the RF’s electronics that gives it a clear edge in terms of utility. Which in field conditions means lethality.

Let’s start with the heart of a binocular: its glass. The reason to gravitate toward Zeiss’s class of glass—they use expensive fluoride lenses in their rangefinding models—is that they transmit about 92 percent of visible light. That’s a big number, but it’s slightly lower than the world-class image delivered by Zeiss’s non-rangefinding Victory models, which contain best-in-class Schott glass.

Here’s the dirty little secret of rangefinding binoculars: they tend to be slightly darker and slightly less sharp than equivalent binoculars without the rangefinder. That’s because rangefinding binoculars need an extra lens in order to project the display in the field of view, and any additional lenses decrease light transmission. Also, the special coatings required to enhance visibility of the LED display also impair light transmission.

Given those constraints, the better the glass, the better the image. But it’s also the main reason that it’s hard to compare the optical capabilities of rangefinding binoculars with their traditional counterparts.

As for the rangefinder, Zeiss advertises an effective range of 2,500 meters. In my tests, I ranged reflective targets (the roof of a neighbor’s barn) at 2,700 yards in perfect conditions, the soft light just after sunset. Laser rangefinders don’t like direct sunlight; the sun’s rays create too much “noise” for accurate rangefinding. In hunting scenarios, I was able to range deer-sized targets at just beyond 1,200 yards in almost any conditions. I figure that’s beyond my capability as a shooter, so any target detection beyond about 1,000 yards is gravy.

As a bowhunter I deeply appreciate the Zeiss’s close-ranging capabilities. The Zeiss Victory rangefinder will range as close as 11 yards. It also contains an angle-compensating feature that allows shooters to select either a line-of-sight aiming solution or an angle-adjusted solution.

What the Zeiss Victory RF Does Best

Binoculars from premium European brands (including Zeiss optics) not only allow you to see well, but they also look exceedingly good. The exterior lines of most flagship models have the sexy contours of sports cars, and their logos and other appointments are understated and tasteful.

But when manufacturers add the laser-emitting diode that rangefinders require, plus the motherboard and electronics required to power the aiming solution and then deliver it to the display, they tend to distort the lovely lines of their premium binoculars.

Swarovski has addressed this dilemma with the “baby bumps” on the underside of its EL Range that house the electronics. Leica’s Geovid has a ponderous bridge between the binocular tubes that contains the business of rangefinding.

But somehow Zeiss has managed to keep the lines of its elegant Zeiss Victory RF binocular fairly intact, while still incorporating one of the most powerful and precise lasers of its European peers. That’s not all that’s going on under the hood; the Zeiss Victory RF also houses a wireless Bluetooth transmitter that communicates with a mobile device, allowing users to upload ballistics info from a mobile app to the onboard computer.

The upshot of the design is that you’d never know that the Victory RF includes a laser rangefinder unless you started pushing the activation buttons.

What the Victory RF Does Worst

It’s fair to note a drawback of the Zeiss Victory RF binoculars. The lazing button is forward of the double-hinge bridge and the balance point of the binocular. In order to activate the button, users have to either use their weak pinkie fingers or take one of their stronger fingers off the grip of the barrel in order to activate the laser, inevitably introducing a bit of shake to the otherwise rock-solid viewing platform. It’s a small quibble, but the ergonomics of the Victory RF are so good that it seems a shame that the location of the buttons are, frankly, un-ergonomic.

About those very-good ergonomics: the oversized center-bridge focus wheel is silky smooth and precise, though it turns just a little too easily for my druthers, meaning that its focus strays after bumping around in a chest harness. The twin focusing rings on both eyepieces—one focuses the image, the other focuses the display for users’ unique visual acuity—turn with authority and precision. The RF borrows from Zeiss’s first-in-class LutuTec and Zeiss T coatings that protect the external glass surfaces from both moisture and abrasion while enhancing contrast.

The Victory RF houses its CR2 battery in a receptacle on the downrange side of the focus wheel. It’s an obvious place for the battery, and helps keep the exterior lines of the Zeiss as shapely as a dancer’s leg. But the slotted battery cap replaces the threaded stud that most binoculars use to tether to a tripod adapter. If you intend to deploy the Zeiss Victory RF on a tripod, consider investing in an aftermarket mount.

Using the Hunting App and Electronics

The Victory RF works just fine as a stand-alone viewing and rangefinding instrument. But to unlock its full capabilities, users should download the Zeiss Hunting App from either the App Store (for iPhones) or Google Play (for Androids). The mobile app allows users to input up to nine specific ballistic profiles of favorite bullet types and velocities that are then uploaded to the binocular via Bluetooth.

Fields in the app allow users to create field journals and profiles of dozens of different calibers and loads. But the impressive part of the interface is how it combines all that information with real-time conditions—temperature, altitude, and barometric pressure—to deliver a place-specific aiming solution wherever you hunt or shoot, whether you have cell service or not.

Many rangefinding binoculars overuse the display, which in the case of the Zeiss is a red OLED with intensity controls to make it either pop in bright light conditions or remain subdued in dark conditions. Other brands cram all sorts of information into the field of view, including temperature, angle, bullet profiles, and other atmospheric information. That’s overkill; all you really need is a simple reticle and an angle- and ballistics-adjusted aiming solution. Which the Zeiss Victory RF provides clearly and elegantly.

Does the Zeiss Victory RF Accomplish Its Mission?

I’m a student of the less-is-more school of displays, especially for hunting optics. The Zeiss delivers what I’m after: a simple circle reticle, the distance in either yards or meters, and either a line-of-sight or angle-adjusted aiming solution.

Once you spend time with the unit, and appreciate that the aiming solution is based on the vast amounts of data that it receives from the mobile app, your confidence will grow that the Zeiss Victory Rangefinder is delivering the best and simplest aiming solutions in the premium market. Combine that knowledge with the sharp optical resolution delivered by the excellent glass of the Victory RF, and you should have no excuse for missing again.