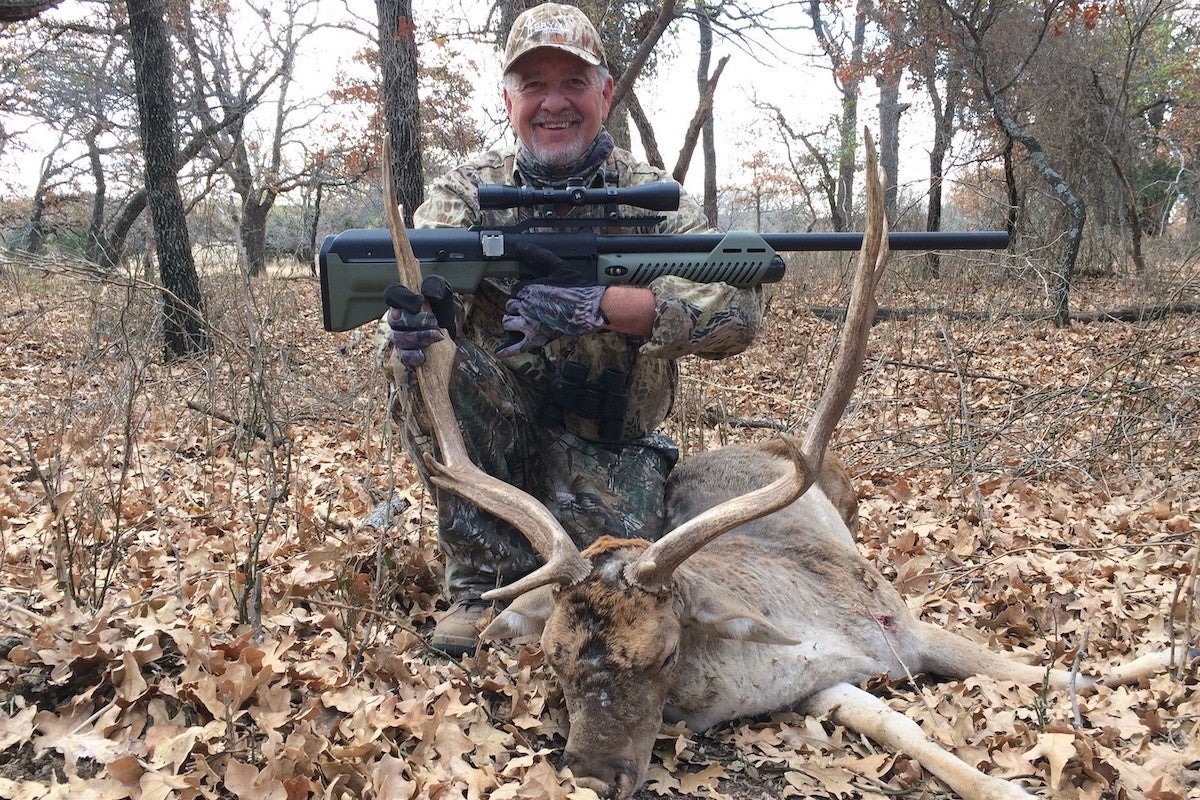 The Most Powerful Air Rifles of 2021

I started my big bore airgunning journey back in 2002 with a .308 semi-custom rifle built for me by the father of the modern big bore airgun, Dennis Quackenbush. Then, later that year, he built another rifle in .50 caliber for me to hunt hogs and exotics down in Texas. Over the intervening years, Dennis produced another dozen rifles for me in a range of calibers — including the .457 used on most of my airgun hunts in South Africa. At that time, if you wanted the most powerful airgun for hunting, Quakenbush was the only show in town. And even though this was a niche market, and arguably it still is, there was enough business to keep his order book filled with a long list of potential buyers just waiting to give him their money. The Quackenbush rifles were uncomplicated, solidly built, and extremely shootable hunting air rifles that were truly made for the field.

As the demand for guns grew, along with the waiting time for a Quackenbush rifle, other small-scale manufacturers came to market with rifles of varying quality. This situation persisted for a few years as the market continued to grow. It is true that there were a couple of major overseas manufacturers producing a limited selection of big bores. Yet, they tended to be somewhat anemic in comparison to a Quackenbush of the era.

Then, a couple of important events occurred over a few short years. The American airgun manufacturing giant Crosman and later the smaller, more experienced PCP air rifle manufacturer AirForce Airguns, released true big-bore air rifles to the US market. Concurrent with this, other manufacturing companies started to gain traction, some small-scale startups such as Professional Big Bore Airguns (PBBA), and other large-scale manufacturers such as Hatsan Airguns, offered a large and evolving lineup of powerful big bore rifles.

The benchmark for the most powerful air rifles is power output, which makes sense, even though I firmly believe that accuracy trumps this and shootability is close on its heels. But all things considered, once you have achieved a level of accuracy and come up with a design that works for shooters, more power is usually better. So, with this in mind, I will present a few of the most powerful airguns available today. It’s not possible to cover all the calibers and configurations, but I’ll pluck out a few of my favorites.

Every manufacturer wants to be known as having the most powerful air rifle in the world, and until recently, this was a fluid state between a couple of the companies. The “correct” answer of who made the most powerful rifle was a bit difficult to assess because of the number of shooters modifying their guns to up the power. So, to provide context, I always look at peak power in an out-of-the-box configuration. With this benchmark both the AirForce and Hatsan shared the most powerful moniker for a while.

It is worth noting that in the world of airguns, ammunition (slugs, bullets) and calibers are decoupled from the power produced by the gun. As an example, two .457 rifles with 26-inch barrels of different designs using the same projectile, can deliver vastly different power outputs. I have two .50 caliber rifles from different manufacturers, one generates 220 ft-lb and the other 700 ft-lb using the same slug. The power output is a function of barrel length and the valve design and setup, the fill pressure, and the airflow through the transfer port. Of course, it is possible to get more power by going to a larger caliber, optimizing the valve, and driving it at higher pressures. Still, caliber alone is not the primary factor.

With that said, let’s look at my list of the most powerful air rifles available today. In no particular order, they are the Hatsan PileDriver .50 caliber, AirForce Texan CF .50 caliber, Airguns of Arizona Bushbuck .457, Umarex Hammer .50 caliber, and the AEA Zeus .72 caliber rifles. These guys all have power in common, but they represent a mixed bag of features and styles.

The most powerful air rifle threshold was recently smashed with the release of the AEA Zeus .72 caliber rifle, specifically the 32-inch barrel model. AEA is the new kid on the block, having come onto the market in the last couple of years. They have some interesting new gun designs, but it is their big bore offering that’s been garnering a lot of attention. The .72 caliber Zeus is both the largest caliber and the most powerful air rifle on the planet. The most powerful configuration is a sporter-style rifle with a 32-inch barrel and cycled with a lever action. With a fill pressure of 4500 PSI, the 650 cc air tank supplies the power to drive an 850-grain slug at approximately 870 ft-lb for a power output of around 1500 psi and produces three shots per fill. I have the carbine, which is getting about 1,100 ft-lb, but I have a friend getting over 1,600 ft-lb with his test gun. With the 32 inch barrel, the Zeus weighs in at about 12 pounds, so it’s got some heft to it, but it also helps to calm down the recoil. The gun comes with an option for a 32-, 24-, or 16-inch barrel.

The AirForce Texan big bore air rifles have become the most popular of the big bores over the last few years, and there are several reasons for this. The bottle for a buttstock design and inline valving are well proven in the field. The guns are adjustable and lend themselves to customization and personalization. They are also very well made and available in several calibers, including .257, .308, .357, .457, and .50. The performance of the Texan, with respect to both accuracy and power, is rock solid. I’ve used mine to take several species of North American big game. The most powerful version of this gun out of the box is the Texan LSS .50-CF, which is a .50 caliber gun generating over 800 ft-lb. The rifle features a 490 cc and 250 BAR tank that delivers three to four shots per fill. That’s moving a 620-grain slug at 620 fps for about 805 ft-lb. I find that the Texan’s excellent trigger helps wring the most accuracy out of the Lothar Walther barrel and the rifle as a whole.

Next on my list is a big bore that was released by the airgun manufacturing giant Hatsan a couple of years ago. Their rifle is called the PileDriver, an appropriate name for a gun that has passed the 800 ft-lb threshold. There is both a .457 and the .50 version in production, and along with the production Texan, has shared the “most powerful big bore” title for the last couple of years. The PileDriver is a bullpup configuration, but it is still a big gun, weighing 10 pounds with an overall length of 46 inches and a 33 inches barrel. The synthetic thumbhole stock has an adjustable buttstock and cheekpiece, and uses a 480cc carbon fiber tank to deliver three to five shots before the point of impact shifts. The single action gun is cycled with a side lever action, there is easy access to the loading port, and Hatsan’s two-stage Quatro trigger is crisp, with a medium pull out of the box but can be adjusted to suit. This is another of the most powerful air rifles that I’ve hunted with quite a bit since its release, and it has put a couple decent bucks in the truck for me.

Airguns of Arizona is a major U.S. retailer that is especially well known as an importer of high-end European guns. But a few years ago, they began manufacturing a big bore rifle called the Bushbuck. To my eye, this is the best looking big bore rifle on the market. It is a bolt action sporter style rifle in .452 that is dressed in a laminate stock with stippling on the forestock and grip, with an adjustable cheekpiece. This rifle is solidly built and weighs in at 10.2 pounds with an overall length of 49.5 inches and a 30-inch barrel. My Bushbuck is the compact version. It is 43.5 inches long with a 22.5-inch barrel. After a point, I am usually willing to trade off some power for a more compact gun. The 285 cc air reservoir fills to 4500 psi using an unobtrusive under-barrel tube that helps maintain the rifle’s sleek lines, while providing two to four shots per fill. The single-shot Bushbuck has two power settings and generates over 600 ft-lb in the high setting. I’ve carried and used this gun on both North American and South African hunts, and it is a capable rifle for any non-dangerous game.

The last of the most powerful air rifles — the Umarex Hammer .50 — came to market a couple years back, and I had the opportunity to use the first ones while filming a segment of the American Airgunner TV program. This rifle offers some interesting technology: it is the only one of these rifles that is magazine fed, utilizing a linear shuttle mechanism with a two-shot capacity. This shuttle is cycled with a bolt action that operates with little effort. The Hammers onboard air storage is a 394 cc carbon fiber bottle that fills to 4500 psi but is regulated to 3000 psi to ensure shot-to-shot consistency. The stock is a synthetic material, designed and built for Umarex by PolyOne, and uses an AR Magpul style grip. This rifle is a solid piece of gear at just under 44 inches long, a 29.5-inch barrel, and weighing 8.5 pounds. I’ve only had this rifle out once on a fallow deer hunt, and anchored a nice buck putting a 330-grain slug into him that transited end to end on a quartering shot.

Answers to some of the most-asked air rifle questions.

A .177 pellet is not suitable for deer hunting. It is best used for small-game hunting and recreational shooting.

As we discussed earlier, not all rifles of the same caliber produce the same amount of energy. In general, a .22 caliber air rifle is suitable for varmints and small game.

Q: What is the highest caliber air rifle?

The AEA Zeus in .72 caliber is the most powerful commercially available air rifle, and it has the largest caliber widely available. However, there are rare .82 caliber rifles also available through custom makers.

Final Thoughts to Help You Pick the Most Powerful Air Rifle

The most powerful air rifles are quite different, but there are similarities connecting them all. I would be happy using any one of them when out after deer or hogs, though my preference would change based on the specific situations and conditions. All of these rifles are accurate, generate more than sufficient power, and have an acceptable shot count for big game hunting. But air usage, number of shots, sound level, anticipated range, and size and weight of the gun are variables each hunter needs to assess based on their own needs and preferences.

Other factors to consider are, how will you keep the gun filled? Will you get a compressor or refill tanks at a local paintball or dive shop? Can, or will, the local shop in your area charge the tank up to over 4500 psi? It’s a lot easier to keep a gun charged at 3600 psi than 4500. Can you reduce the power if hunting in an area where limited range is advantageous, or so as to reduce air usage? Is noise an issue, and do you need to have the lowest possible sound signature? Will most hunting be from a blind or a stand, or will you spend hours covering large tracts of land on foot?

Each shooter needs to weigh the importance of these variables to find what suits them best. I can honestly say that — my own personal preferences and biases aside — any of these rifles could be a perfect big game rifle depending on what you like and what’s important for you and your intended uses.