The new electric Ranger from Polaris is incredibly quiet and more powerful than comparable gas-powered UTVs. Hunters will love everything but the price tag 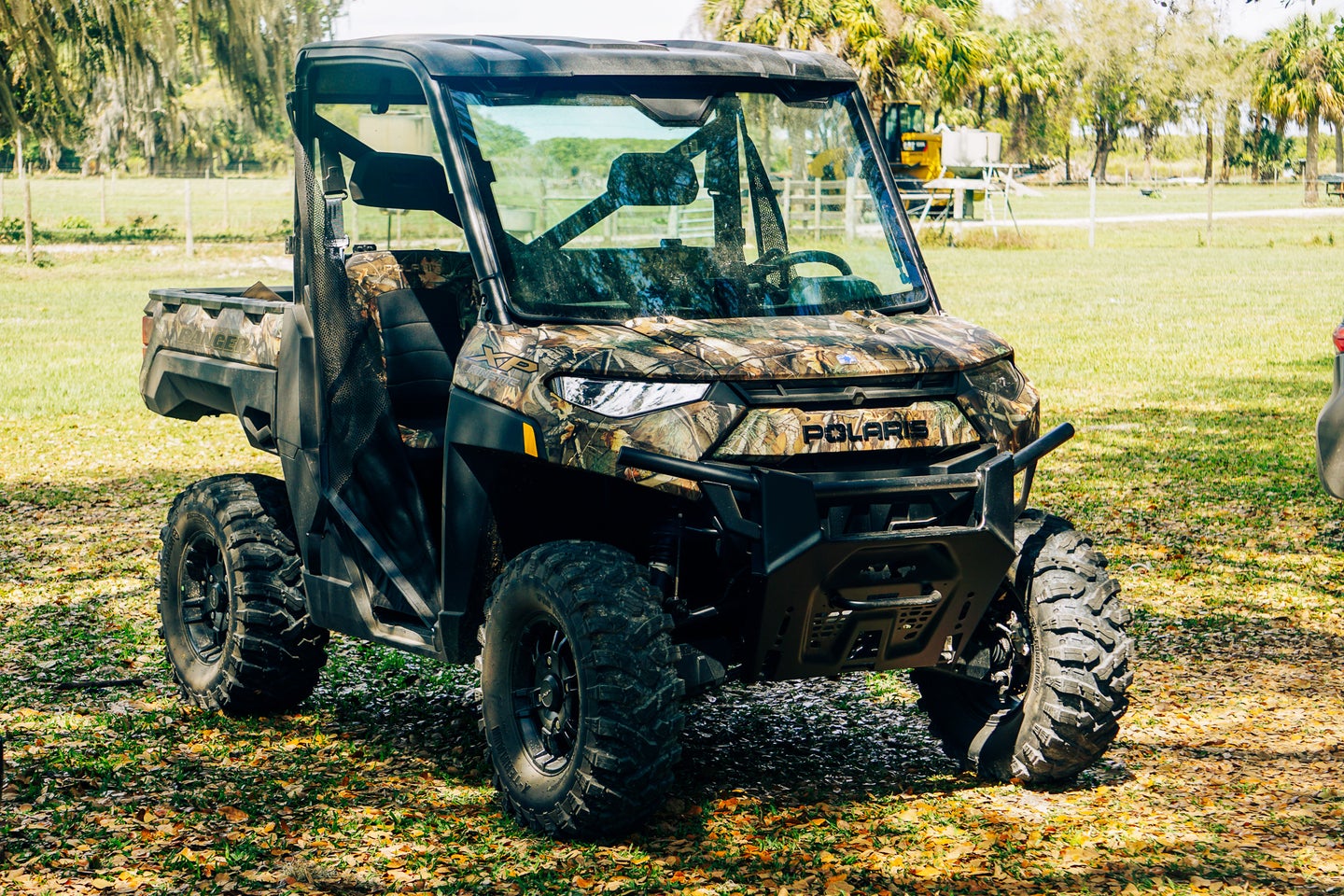 I’ve known a handful of hunters in the East and Midwest who’ve tried to upgrade used golf carts for hunting. Not because they are better at hauling treestands or navigating rough terrain than a UTV, but because they’re almost silent. And serious whitetail hunters know that ripping around on a loud ATV or UTV all season will eventually cause mature bucks to go nocturnal, or slip off the property.

Enter the electric Polaris Ranger XP Kinetic UTV. It’s more powerful than its gas-operated counterpart, it can haul three hunters in all kinds of terrain, and it’s as quiet as a golf cart. I got a chance to drive the Kinetic Ultimate while hunting turkeys on a sprawling cattle ranch in Florida this spring, and it did not disappoint.

There are two versions of the Ranger XP Kinetic. The biggest performance difference between the Premium (the base model) and the Ultimate (the pimped-out version) is the larger lithium battery in the Ultimate, which gives it allows it cover almost double the distance under optimal conditions. The Ultimate also comes with more accessories and digital features, like a 7-inch touchscreen display. You can compare the two models here.

In fall 2020 Polaris announced a partnership with Zero Motorcycles, a company that’s been making electric motors for years and is now making motors for the new Kinetic. That should alleviate some concerns from customers who worry about buying a company’s first big crack at an electric vehicle: the Kinetic’s technology might be new to Polaris, but it’s not new technology.

“It wasn’t like we were just hopping on the car bandwagon with the EVs,” says Polaris marketing manager Tanner Blaschka. “There are legitimate benefits of electric technology in the off-road space. Performance benefits, but also the quietness. That’s the first thing people love and notice about it. And the kind of people we thought of were hunters—that was our number-one use case.”

Those benefits include more horsepower, more torque, and less maintenance compared to gas Rangers. Roughly 70 to 80 percent of traditional Ranger customers hunt, says Blaschka, and the Kinetic’s quiet ride is ideal for that. (While Polaris has offered an electric Ranger for years at a more attainable price, the Ranger EV runs on a traditional lead-acid battery and has a reduced hauling capacity, among other performance limitations.)

“Even looking at farmers and ranchers,” says Blaschka, “There’s so little maintenance for these things. You don’t have oil changes, you don’t have pretty much any liquids, right? For them, when their livelihood [is on the line], time is money and any time they can be in the vehicle and not have it in the shop or being serviced, they love that.”

The main downside to the Kinetic is its reduced range compared to gas UTVs: The Kinetic Premium has an estimated range of 45 miles, while the Ultimate is rated to 80 miles.

“If you’re going trail riding and that’s the main thing you do—you pack up the family, you go trail riding all day, all weekend—it might not be the vehicle for you,” says Blaschka.

But most Ranger customers don’t drive that far most days. We didn’t plug in the Kinetic once during our week at turkey camp. After a few days, we had put 15 miles on the Kinetic Ultimate and used roughly seven percent of the battery capacity. To charge the Kinetic, you can plug it into any 120-volt outlet. To charge a dead battery to full capacity takes about 20 hours with that standard outlet. The included charger also works on a 240-volt outlet, which Polaris says can charge the Premium’s smaller battery (14.9 kWh Lithium-Ion battery) from 0 to 100 percent charged in as little as five hours.

The only issue I had during a week of turkey hunting was user error: The Kinetic was so quiet, I forgot to turn it off after I pulled into camp. I put it in park and got sidetracked talking to a couple buddies, then just walked away because the UTV seemed like it was already off. The good news is, Blaschka says, the Kinetic uses very little battery when idle. And when I returned to the vehicle a few hours later to discover I’d left it on, the battery life hadn’t dropped by even a percentage point.

Why Is the Electric Ranger So Expensive?

The Kinetic Premium will run you about $25,000 while an Ultimate will run you about $30,000. There are a couple reasons for that price hike over a gas-powered Ranger, which starts at $12,500 for a similarly sized model. That price difference simply reflects the cost of the technology, says Blaschka, pointing out that the electric F-150s also cost more than the standard models. Those lithium batteries don’t come cheap.

The initial price tag may be more expensive, but Polaris tries to justify that with a cheaper cost of ownership. The company estimates scheduled maintenance costs are 70 percent less than similar gas-powered Ranger vehicles, with gas savings of at least $200 per year. (Those fuel estimates were published prior to the spike in gas prices this summer.) While lithium-ion batteries naturally lose capacity over time, Blaschka says most Kinetic customers will see their batteries retain 90 to 95 of their original battery life in a 10-year period.

It’s hard to overstate how quiet the Kinetic sounds compared to gas-powered Rangers. While Polaris doesn’t quantify the Ranger’s reduced noise emission with any sort of spec, it’s arguably the UTV’s most appealing feature. In a week spent driving two-tracks on a ranch in Southern Florida, we passed half a dozen unsuspecting deer that noticed us only because they saw us—not because they heard us. You’re able to listen for gobbles and deer walking in the brush as you drive. You can also hold a normal conversation with your buddies in the front seat instead of shouting above the engine noise. While the system does produce a higher-pitched whine at top speeds, the UTV is nearly silent while idling and at lower speeds.

Compared to the gas-powered Ranger we drive at my family deer camp, the Kinetic offers much better control at low speeds. Trying to finesse that gas pedal in a pair of thick rubber hunting boots at 5 a.m. usually ends with me shooting backward out of the garage before I manage to find the right balance in the pedal. The Kinetic eases from park into lower speeds easily. That makes everything from backing up to a trailer to discing during food-plot prep a lot easier.

There’s a 12-volt power outlet in Kinetic’s bed for charging small devices or plugging in power tools. It also cures the headache of powering aftermarket food plot equipment, like a boomless sprayer.

Additional Features of the Ranger Kinetic

The Ranger Kinetic has lots of thoughtful touches to mitigate real-world problems that drivers might run into, many of them geared to address what Blaschka calls “range anxiety.” The dashboard displays offers various readouts to keep tabs on battery life, estimated range, and other levels.

“People are ultimately inherently worried about range. Like, oh shit, what if I’m stuck in middle woods,” says Blaschka. “Range for the majority of people actually shouldn’t be that big of an issue. You can also just pull up Ride Command and see your estimated range.”

“Most people are gonna charge the Kinetic at the same place every night. I have my garage that I’m gonna plug it into every night. You can drop a waypoint on that and you can actually see at any given point how far away you are from your charging point. It’s as the crow flies [not actual driving distance], but think about if you’re like, oh crap, I’ve got five percent battery left. Am I gonna make it? You can just look and tell.”

There are three drive modes that essentially control torque: Eco, Standard, and Sport. (The Eco mode limits torque and your top speed to conserve battery.) The regenerative braking kicks in whenever the UTV is moving forward and your foot is off the gas to automatically recharge the Kinetic.

So far, the Ranger Kinetic is about as sweet as it sounds. The price tag is hard to swallow—you can find a used pickup for less—but that doesn’t seem to be deterring customers. When the Kinetic was first introduced in December, the available models sold out within two hours. It remains currently sold out, and it likely will be hard to get one for a long time. Pre-order availability is expected to open this summer.