Plus Trump to Speak at NRA Convention 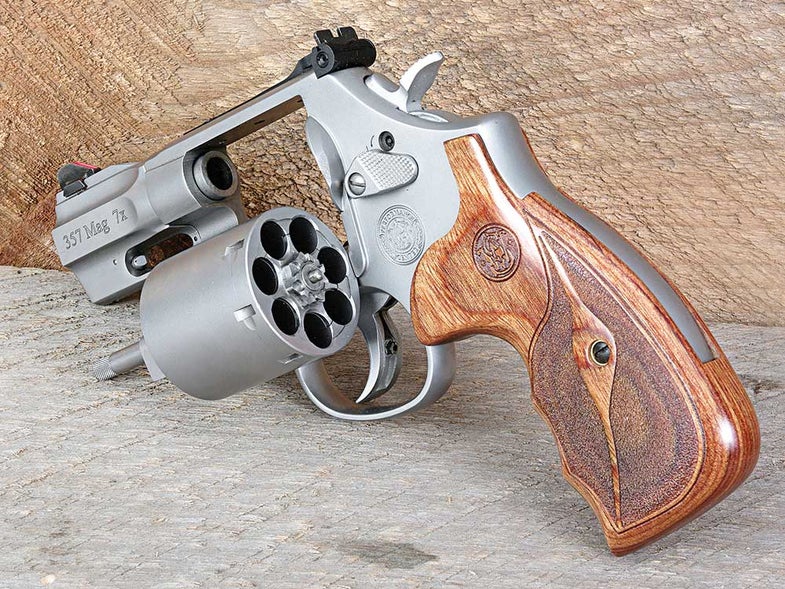 If a six-shooter doesn't float your boat, try a seven-shot revolver like this Smith & Wesson 686 Performance Center in .357 Magnum. Yamil Sued
SHARE

According to The National Shooting Sports Foundation’s (NSSF) “Firearms and Ammunition Industry Economic Impact Report: 2017,” the firearms industry’s economic contribution to the nation’s economy in terms of jobs and taxes dramatically increased from $49.3 billion in 2015 to $51.3 billion in 2016, with combined business and excise taxes topping $6.8 billion last year.

The NSSF’s annual report tabbed the number of Americans employed by manufacturers, distributors and vendors of guns and ammunition at more than 141,000 full-time employees with nearly 160,000 additional jobs in supplier and ancillary industries.

The report documents how the firearms industry’s revenues, tax contribution and job generation has nearly tripled in less than a decade, from $19.1 billion in 2008 to $51.3 billion in 2016 — a 168 percent increase.

Other statistics included in the NSSF’s report:

“The mainstream media work hard to convince the public that gun control measures are justified because gun owners are outliers, with gun ownership on the wane across the country,” the NSSF maintains in a statement within the report. “These facts speak for themselves – ever-growing numbers of Americans believe in the Second Amendment, and take active steps to exercise their right to keep and bear arms.”

— Gun Industry Congratulates Itself For Drop In Accidental Gun Deaths

TRUMP AT THE STUMP

President to Address NRA at Annual Convention On April 28

It’s so good to “have a president who respects the Second Amendment,” an NRA spokeswoman says.

President Donald Trump has agreed to be the first sitting chief executive since Ronald Reagan in 1983 to speak at the National Rifle Association’s annual convention on April 28 in Atlanta.

“The NRA is honored to have the president address our annual meeting at the leadership forum,” spokeswoman Jennifer Baker told Bloomberg News. “We’re excited to once again have a president who respects the Second Amendment.”

The NRA endorsed Trump for president last May — a no-brainer considering Democratic candidate Hillary Clinton made gun control a pivotal plank in her campaign. Despite a checkered record in his expressed past views regarding the Second Amendment, Trump seized gun-owners support-by-default and ran with it right into the White House.

As president, Trump has rewarded gun-owners’ support by nominating Neil Gorsuch — a staunch backer of the Second Amendment — to the Supreme Court and doing away with a bevy of Obama Administration gun restrictions, including a rule that automatically blocked gun sales to people who concede financial management of Social Security benefits to others without any due-process appeal.

— Trump to Speak at NRA Forum, First President to Do So Since 1983

Montana Democratic Governor Steve Bullock on April 14 vetoed an adopted bill that would have allowed residents to carry firearms into restaurants.

Bullock used “an amendatory veto” to return House Bill 494 to the Montana Legislature. His proposed amendment would only allow the carry a concealed firearm in a restaurant where alcohol is not served.

“This amendatory veto is the Governor’s attempt to camouflage his continued opposition to the self-defense rights of law-abiding citizens, as it is already legal to carry a concealed firearm in a restaurant that does not serve alcohol,” the NRA noted in a statement criticizing the veto.

As adopted, HB 494 would have allowed law-abiding Montanans to carry a firearm for self-defense while patronizing a restaurant where alcohol is not the primary item of sale.

“Establishments that serve alcohol are often gathering places in Montana,” Bullock told the Associated Press. “It is not uncommon for a bar to also serve food and for family restaurants to also serve alcohol. HB 494 introduces uncertainty for both concealed weapon permit holders and bar and restaurant owners about which rules apply in which establishments.”

“I have been and will continue to be a strong advocate for second amendment rights of the citizens of Montana,” Bullock continued. “I am, however, also an advocate for common sense. I am proposing amendments that reflect the common sense I believe most Montanans value. My amendment will clarify that a person may only carry concealed in restaurants where alcohol is not served.”

— Oregon Lawmakers Will Hold Hearings On A Slate Of Gun Bills

— Washington: Time runs out on bill that would inform police and victims of felons’ attempts to purchase guns

Iowa Ruling: Don’t Ask What A Background Check Will Tell

The Iowa Supreme Court on April 14 threw out a man’s conviction for lying about his criminal past on a handgun permit application, ruling the questions asked by the state should not have been asked in the first place.

According to the Associated Press, James Robert Downey, 51, submitted a 2015 application to receive a gun permit. The application required him to verify his identify, such as name and address, driver’s license number and date of birth. The form also required him to answer 10 more questions, including if he had ever been convicted of a felony.

Downey answered no to that question. The subsequent mandated criminal-background check showed Downey had been convicted of a felony — a third offense of drunken driving — and he was charged with and convicted of making a false statement on the application, receiving a five-year prison sentence, which was suspended, and two years of probation.

Downey appealed, arguing that Iowa legislators, in passing in 2010 a law on gun permits, prohibited the Iowa Department of Public Safety to ask questions beyond those that verify the applicants’ identity. Justices agreed, ruling the state can “only” ask the basics.

Essentially, the court ruled, since the criminal background check is already mandated as part of the process, the only questions necessary for an applicant to answer are those that confirm identity.

As Linn County Sheriff’s Maj. John Godar told the Associated Press, every sheriff’s office in the state runs background checks on applicants for gun permits. So, a felon would be identified and denied a permit anyway.

— Iowa Supreme Court: if the question isn’t legit, you must acquit