We settle the 10mm vs 44 Mag. debate—and wreck our hands in the process 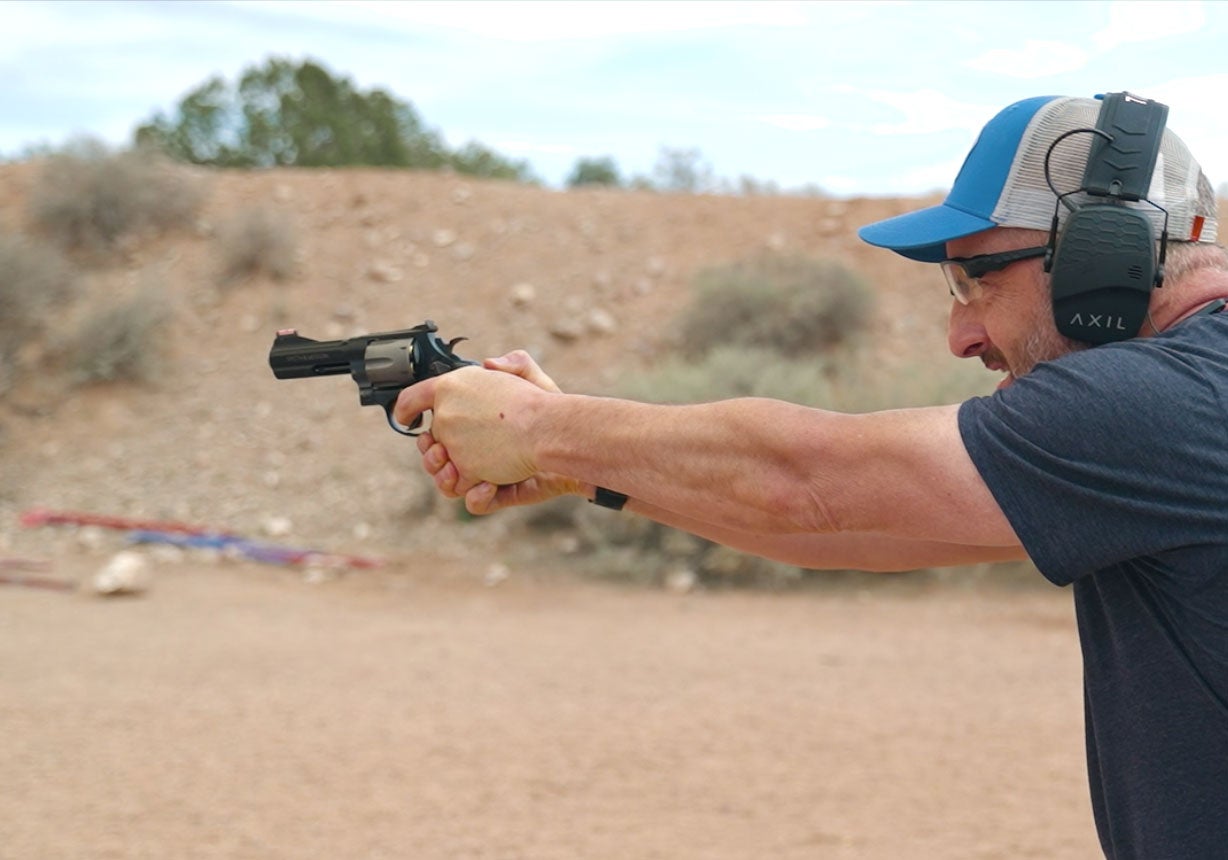 The author gets ready to ride the lightning behind his lightweight .44 Mag. Tanner Denton
SHARE

In the great bear-gun debate—10mm vs .44 Mag.—which camp are you in? Without question there’s been a major shift from the .44 Remington Magnum and other fire-belching revolvers toward semiautos chambered in 10mm Auto for those wanting a measure of personal protection against bruins and other potentially dangerous animals. I live on the boundary of grizzly country in southwest Montana and all my local gun stores confirm this trend. Backcountry adventurers, whether they are hunting, fishing, or hiking, are opting for autoloaders over wheel guns.

You’ve Got to Be Kidding

Plenty of old-school handgunners scoff at this idea. When comparing the energy of a .44 Magnum to that of a 10mm, there is no competition they insist. In their telling, all those extra rounds in a semiauto 10mm will just give you that many more opportunities to piss off Yogi before he flays you alive.

Bear Guns By the Numbers

And if showing off a ballistic chart were all it took to dissuade a would-be ursine assailant, they would certainly be right. A hopped up .44 Mag. load, such as the Buffalo Bore 340-grain +P+ hard cast flat nose bullet generates a whopping 1,533 foot-pounds of energy at the muzzle. Compare that to their 10mm Auto mono-metal Dangerous Game load that produces 607 foot-pounds of energy with a 190-grain bullet at 1,200 fps. By that yardstick, the 10mm Auto seems pitiful indeed.

Case closed, right? Not so fast, the 10mm vs .44 Mag. debate isn’t just about ballistics. The problem is you actually have to hit a bear in order to have a chance of stopping it. And in light of a grizzly’s top speed—a shocking 35 mph—that is no easy task. Especially with a hard-kicking handgun torquing on your wrist.

To get a better handle on this debate I enlisted the help of two fellow pistoleros: Sean Murphy, a USPSA Grand Master, and Outdoor Life staff writer Tyler Freel, who by virtue of living in Alaska hunts bears every year. We conducted a live-fire experiment at Gunsite Academy in the form of a simple, but challenging drill. The three of us shot an array of five knockdown steel poppers from far to near to simulate a bear charge. The farthest target was in the center and then we zig-zagged from far left to far right and then to near left and near right to add in erratic motion and increase the stress level. The farthest target was approximately 20 yards away and the closest were about 12 yards downrange. Watch the video above to see the drill for yourself.

We used four guns for this test. The revolver was a Smith & Wesson 329 PD, which is a Scandium framed .44 Rem. Mag. The great virtue of the 329 PD is its weight. Unloaded it tips the scales at a svelte 23 ounces. I carried this gun for many years while hunting and fishing in Montana, Alaska, Wyoming and Idaho on both my hip and in a chest rig, and I never found it to be burdensome. But its light weight is also its biggest liability. Shooting it with full-house defensive rounds is extremely painful. As the results of our test show, it is much slower and less accurate to boot, despite its excellent, large, and bright fiber-optic front sight.

During the 10mm vs .44 Mag. test, none of us were looking forward to running the S&W 329 PD with the Hornady 240-grain JHP loads I had brought along. But while our hands were fresh we shot the revolver first.  According to Hornady’s data, the XTP bullets from a 7.5-inch barrel clock at 1350 fps and generate 971 foot-pounds of energy at the muzzle. And I can vouch that you feel every one of the foot-pounds when you pull the 329’s trigger. (I’m glad I didn’t bring the 305-grain hardcast bullets I normally carry in the revolver, which step out at 1,325 fps with 1,189 foot-pounds of muzzle energy.)

Not only was the muzzle flip difficult to control, but running the revolver quickly was painful as hell. And quickly was a relative term. Our average run on the five-target array was 5.5 seconds with a -1.3 accuracy score. (Meaning we missed an average of 1.3 targets during the drill.) Interestingly, one of the misses was an edge hit that failed to knock over the steel popper, which drove home our collective observation of how difficult the revolver was to control while going for vital hits.

We all shot the 10mm Autos much better, despite the fact that the webs of our shooting hands were swollen and bruised after running the .44. We alternated through the pistols, running them in no particular order, but recording our impressions after each run. For ammo we ran 180-grain JHPs from Federal and Hornady loaded to similar velocities. Published data gives speeds of 1,275 fps and a muzzle energy of 650 foot-pounds.

As the chart indicates, the average speeds for the Glock (3.0 seconds), Springfield Armory (3.19 seconds), and the S&W M&P 10mm (3.67 seconds) were vastly superior to what we got with the revolver. Moreover, our accuracy with the autos, which were all fitted with red-dot sights, was much better. Most of the runs were clean with an occasional single dropped target for an overall average accuracy score of -0.3 with each pistol.

The differences in the speed among the 10mms isn’t surprising. The extra weight in the Glock G20 thanks to the Acro and the X400 light, combined with the custom stippling, make it easy to shoot well and fast. Likewise, the gas pedal on the Springfield Armory XD-M helped it perform better. The stock (other than the red dot) S&W M&P 10mm was lighter and therefore slowest of the lot, though with some better stippling up front and a light on board it would certainly run a bit faster.

Prior to the test, all the shooters had been leaning toward the 10mm Auto, and after running the drills we were convinced that our instincts were spot-on. When you weigh the relative advantages and disadvantages of the platforms, we couldn’t bring ourselves to advocate for the .44 Mag.

It seems that fans of the .44 Magnum for bear protection only have one thing to hang their argument on: muzzle energy. And I don’t mean to discount that. If I had to hit a charging bear with just one bullet, bigger is certainly better. But given that the hits will come more slowly and less frequently, and that with a revolver there are fewer chances to connect—that single advantage becomes less persuasive in the 10mm vs .44 Mag. debate.

So, yes, the 10mm brings a lot more to the party. It’s quick to deploy, delivers more consistent hits, and with magazines capable of holding 15 rounds (or more) provides more opportunities to kill an attacking bear. A friend of mine who was attacked by a grizzly in Western Montana a few years ago during bow season recalls how the sow had him by the arm and that if he’d had a pistol he could have shot her in the head any number of times. She savaged his arm and shoulder and threw him down a 15-foot cliff, severely injuring him. He now carries a modified Glock G20 everywhere.

I also think the ability to easily add a light to the 10mm Autos is a big advantage. Though I don’t know of any real-world examples that back this up, it seems that during an attack in low light or darkness that the blinding effect of a weapon light could act as a significant deterrent during a bear encounter. It isn’t impossible to mount a light on a revolver, but .44-Magnum wheelguns built to accept lights are extremely uncommon.

Finally, there’s the issue of mastery and practice. Put simply: You’ll spend much more time practicing with a 10mm Auto because it isn’t so punishing. Shooting is a perishable, athletic skill and unless one takes the time to establish and maintain competency, those skills will diminish or fail to take root in the first place. And without those skills, a person who finds themselves fighting for their life will be in even greater danger. Viewed through that lens, the more forgiving nature of the 10mm Auto will trump the .44 Magnum every time.