The Alpha Competition triggers from Timney are a quick way to turbocharge your Gen3, Gen4, or Gen5 Glock 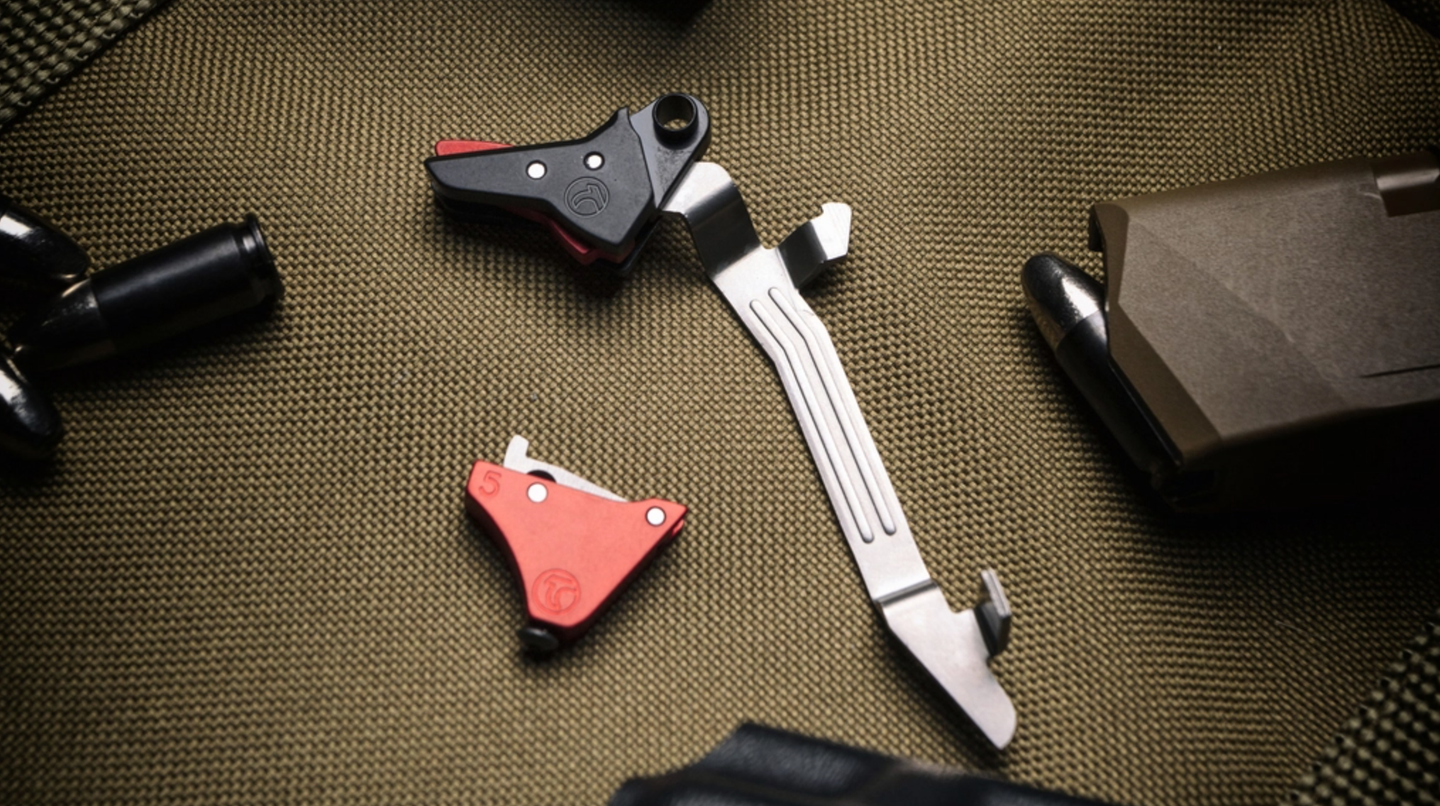 Timney came out with an after-market trigger for Glock pistols in 2021. Timney Triggers
SHARE

Among the best, and simplest, upgrades for the world’s most popular pistol is to replace the stock G19/17 trigger with a Timney Glock trigger. Timney came out with their after-market Glock triggers in early 2021, but I hadn’t had reason to try one out until recently when I purchased a new G19 Gen5 MOS.

The factory trigger on my G19 was as ordinary as they come. A bit heavy, a bit inconsistent, and nothing to write home about. Typical polymer pistol fare. Measured on a digital trigger gauge the break weight averaged 7 pounds, 5 ounces, varying as much as plus or minus a half pound from one pull to the next.

Timney uses Teflon nickle (NP3) on the trigger bar and sear to reduce friction and for corrosion resistance. The aluminum trigger, which has a straight profile, and aluminum safety blade are both anodized against corrosion as well. I like the splash of color that the red safety blade adds to the overall looks of the pistol.

The Alpha Competition trigger has an advertised pull weight of three pounds. On my sample I measured the break weight at 3 pounds 10 ounces. I didn’t mind those extra ounces in the slightest, especially since my G19 is more for personal protection than competition and I don’t want too light a trigger pull.

How Difficult Is it to Install the Timney Glock Trigger?

The short answer: Not difficult at all. But for someone who isn’t accustomed to mucking around with the innards of their guns it could be a little intimidating. It took me and my buddy Sean Murphy (who is a USPSA Grand Master) less than 10 minutes at the range to swap the trigger on my G19, and that was with taking brief pauses for the video we were shooting.

Having gone through the procedure myself, I think there are only two steps that might prove troublesome for an at-home DIY-er. One is during takedown when you need to pry the spring out of the trigger assembly and the other is when installing the new spring that comes with the kit. If you haven’t done either before, the first requires a touch of bravery and the second a deft hand.

The good news is that the trigger comes with detailed step-by-step instructions with clear pictures to help navigate the process. So with a bit of patience and a clean working surface even the most ham-handed of us should be able to install the trigger.

I won’t go over each step in detail, but here’s what you’ll do in order:

My New Timney Glock Trigger at the Range

The difference between the old trigger on my G19 and the Timney Glock trigger was obvious and immediate. The original, heavy duty-style stock trigger, with its inconsistent pull, was now silky smooth and light.

Shooting on steel I could instantly see and feel the difference. The trigger reset was easy to locate and my shots broke beautifully. I didn’t have any malfunctions or issues, nor did any of the other shooters I was with who ended up putting several hundred rounds through the G19 over the next few days.

One thing worth noting is that the take-up on the trigger is a bit spongy. It doesn’t give you a hard wall the way a 1911-style trigger does, for instance. So if you like to stack weight on your trigger as you present the pistol, plan on some long dry-fire sessions to master the feel of this trigger. I’ve had to train myself to not seek a wall in the trigger as I push the gun toward the target, instead applying a small amount of consistent pressure and stopping there. Once my sights are on target, I then break the shot, which comes smoothly.

Why does this observation matter? I think for range work and for use in competition the trigger is a no-brainer. For pure defensive use, I think a shooter would need to dedicate themself to lots of practice, both dry- and live-fire. If someone didn’t do that, they’d run the risk of cranking off a shot they didn’t mean to take in a high-stress, self-defense scenario.

Yes, it is. Timney sent Glocks equipped with their trigger to an independent lab to test for safety. The analysis included drop testing and other forms of abuse to make sure the trigger was safe and operated as designed. The results of the test indicated no safety issues whatsoever.

How good are Timney Triggers?

I have a long history with Timney triggers. I’ve got many on some of my favorite hunting rifles and have used them on my competition rifles as well. They are well built and have excellent customer service should you have any issues. The only problem I’ve ever experienced was on an elk hunt a few years ago where my Remington 700-pattern trigger froze when snow and ice got into it. I can’t rightly blame the Timney trigger for that, as I think that any enclosed-design trigger would have probably seized up under those conditions.

For $150, this is an excellent upgrade for a stock Gen3, 4, or 5 Glock trigger. The quality of the materials in the Alpha Competition trigger is fabulous and the trigger’s performance makes my Glock all that much more fun to shoot. I’ve been a big fan of Timney triggers for years and it is nice to see this 75-year-old company move into this new space. For an easy, and fairly affordable way to boost the performance on your Glock, these Timney triggers are a smart option.