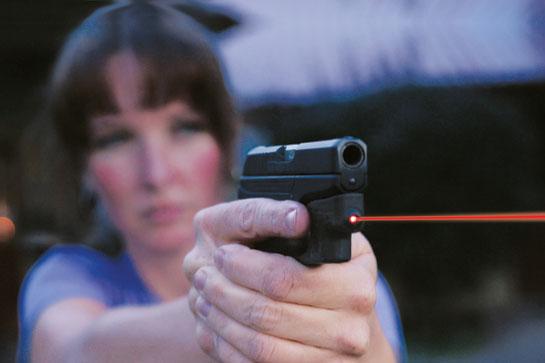 Twenty years ago, laser sighting systems on handguns were expensive and unreliable novelty items. Today, thanks to technological advances,  they are in common use among law enforcement and military personnel, as well as civilians who carry a handgun for personal protection.

Laser sights operate by projecting a visible beam of light directly onto a target. However, they’re not magic wands—they have limitations. Under bright-sun conditions outdoors, the traditional red laser beam is not visible beyond a few feet. Newer green lasers are visible at slightly greater distances, but neither is a viable tool in bright sunlight. However, in that situation, iron sights are readily visible and easy to use.

The Murky Reality
Remove the sun and dim the light, and that’s when lasers shine. Studies have shown that upwards of 80 percent of self-defense shootings occur at night or in some type of building, where dimmer light can make iron sights difficult to employ properly. Under these conditions, a laser is highly visible at distances far greater than those at which most self-defense shootings occur. I have taken laser handgun sights (minus the handgun) into brightly lit big-box stores and had no trouble seeing the dot at 25 yards.

That laser also works in perfect conjunction with tunnel vision, a normal human response to high stress or a deadly threat.

Basic handgun marksmanship dictates that the eyes focus on aligning the sights before the shot is triggered. However, comprehensive studies of gunfight survivors have shown that the sights were often ignored as the eyes focused directly on the threat. In fact, some survivors don’t remember even seeing their sights—just the threat.

With the laser beam directly on the target, the sights are now aligned with where the eyes will naturally go.

Master the Laser
Training with a laser sight is simple. The first step is mastering the activation switch. Some laser models use an instinctive switch, which activates when the gun is properly gripped for firing. With these, you need to learn how to relax the grip slightly to turn the laser off when you don’t need it. Other models use an ambidextrous switch, which requires a separate action to turn it on and off. Regardless of which system you choose, it must become automatic for you to activate the laser. This can be accomplished by practicing at home with an unloaded handgun—draw, activate the laser, and deactivate the laser. Work this drill until it becomes second nature.

Effective live-fire training with a laser sight is equally simple. The key: Don’t hunt the dot. Let it come to you. A laser sight is not a replacement for the gun’s iron sights. It is simply an accessory sight that can become visible more quickly under dimmer light.

Live-fire training needs to be done on an indoor range where the laser sight will be visible. Start from a “low ready” position and present the gun to the target with your normal iron-sight picture. If the laser becomes visible first, shoot to the laser. Chances are as the gun comes to the target, the laser will grab your eye first and become the dominant sight. I have shot several indoor action pistol matches with a laser-sighted handgun, and despite being an IDPA Master Class shooter who knows what iron sights look like, I don’t recall triggering a single shot from the iron sights. Even at 20 yards, the laser dominated my vision before the iron sights came into play.

With practice, a laser becomes instinctive. Just go with the flow and let your eyes dictate your actions.

For more, check out Range365: The Pros and Cons of Laser Sights