I love my chronograph, but I fear it is going the way of the dodo. A new technology has arrived... 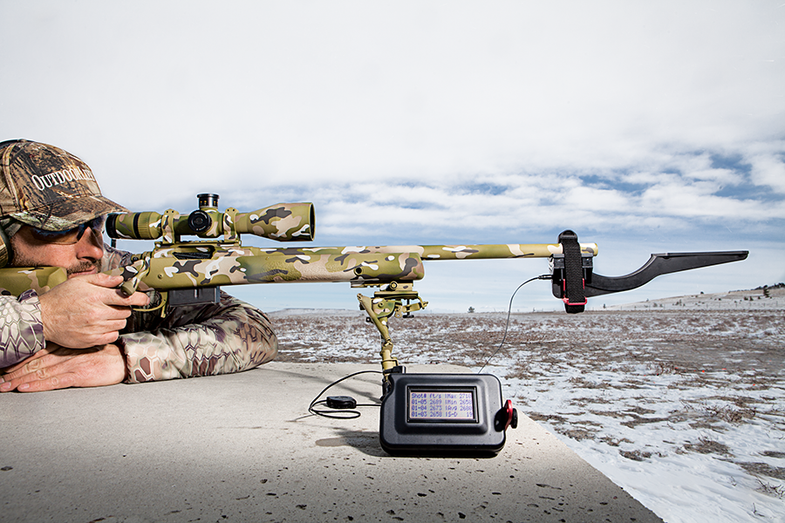 I love my chronograph, but I fear it is going the way of the dodo. A new technology has arrived that is elegant and simple, and addresses several limitations of the chronographs we’ve used for decades. Traditionally, chronographs measure the speed of a projectile optically. As the bullet travels through a series of screens placed some distance downrange, sensors detect the shadow of the passing bullet and start a clock. As the bullet passes the last sensor (there are usually two or three total), the clock is stopped. Because the distance between the sensors is known, the projectile’s speed can be precisely calculated.

The downside of this system is that the screens are cumbersome to set up and align, and this design depends on favorable lighting conditions. Indoor lighting or a low-angled sun at an outdoor range can play havoc with the results.

Magnet Power
As you might guess, the MagnetoSpeed is a chronograph that uses magnets. The whole kit, which is small enough to fit in a pistol case and weighs only 2 ½ pounds, includes a bayonet-like apparatus that clamps onto the barrel of the firearm. Using a system of stackable inserts of varying thicknesses, the shooter adjusts the bayonet so that the bullet will travel just above the two magnets that serve as the unit’s sensors.

Voltage generated by the bullet’s flight over the sensors triggers a timer. The unit takes four time stamps to accurately calculate bullet speed.​

As the bullet flies over the first magnet, it disrupts the magnetic field, which generates a spike in voltage. This spike triggers a clock. Once the clock starts, the first sensor takes another time stamp as the center of the bullet passes over it (see graph). The sensor detects this midpoint as the initial voltage spike drops to nearly zero, which is the “magnetic center” of the projectile. The second sensor takes two similar time stamps, the last of which stops the clock. Because the distance between the two sensors is precisely calibrated—they are 5 inches apart, +/-.0005 of an inch, according to the company— the time of flight between the sensors gives the speed of the bullet.

Multiple Benefits
Thanks to the MagnetoSpeed, we no longer have to worry about our screens blowing over on windy days—an all-too-common occurrence at my range in Montana—and we can tote our chronograph around in a case that’s smaller than a kindergartener’s lunchbox.

Because its sensors are just off the muzzle, the MagnetoSpeed should give us more accurate muzzle velocity data. This is an improvement over optical chronographs, which need to be set up 10 or so feet downrange to work properly. (The explosive shockwave and detritus from the cartridge can knock down the screens or generate false readings if they are too close to the muzzle.)

Almost Perfect
As for the MagnetoSpeed system’s limitations, there are a couple: It will not work with semi-automatic pistols because the bayonet can’t mount on the reciprocating slide. It also can’t measure the speed of arrows, slingshots, or other projectiles one can send through an optical chrony.

The lightweight bayonet has a negligible impact on group size, though the point of impact shifts a bit at 100 yards. But the price is competitive. The V1 system starts at $275, while the V2 model—which is what I evaluated and can be used for more barrel diameters and on guns with suppressors­—goes for $375.

Voltage generated by the bullet’s flight over the sensors triggers a timer. The unit takes four time stamps to accurately calculate bullet speed.

– The accuracy of this Shilen .308 wasn’t affected by the lightweight barrel-mounted sensor, though there was a minor shift in its point of impact.

– Two magnets on the flat portion of the bayonet mount sense when the bullet passes over them. The MagnetoSpeed’s compact size sets a new standard for chronographs.

– The preset controls on the MagnetoSpeed are intuitive and simple. The unit with the display contains a micro SD card that stores data in an easy-to-download format.