A great blade for personal protection, and more 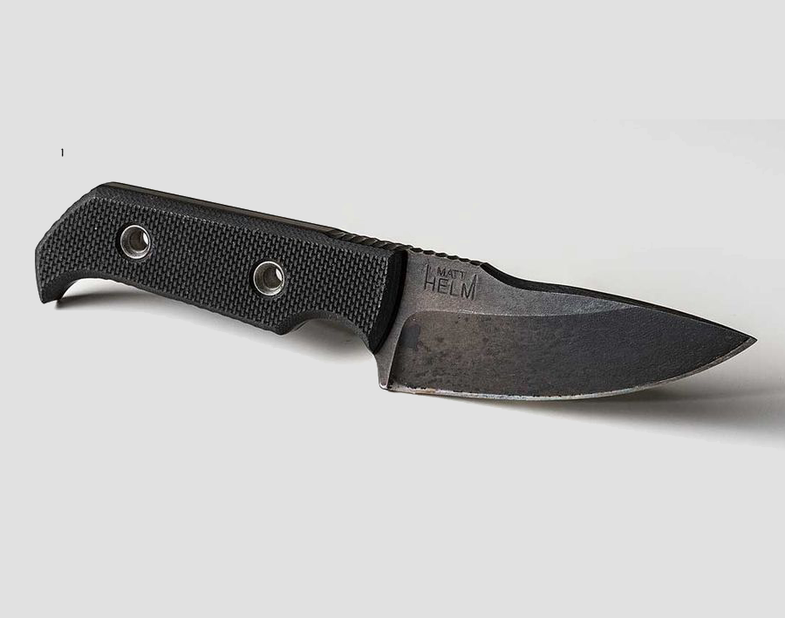 As a knife enthusiast, Matt Helm talks about how he “went through the Rambo knife phase and the shiny knife phase” in terms of what he liked. But in his late 20s, his sensibilities shifted, and inspired by blade smiths like Andy Roy, Dan Koster, and Rich Marchand, he developed a love for practical, well-made tools of understated craftsmanship.

“Their knives didn’t have the feel of something you’d set aside in a velvet-lined case, but something that you would go out and use,” Helm says. When he decided to try his hand at knife making in early 2011, that was the aesthetic he aspired to. And since then, his knives have been in great demand among serious blade aficionados.

One of his latest designs is this tactical knife, which he developed with input from William Petty, a cop and LE trainer who specializes in close-quarters fighting in and around vehicles. I spent several weeks carrying and using this knife, and while it looks basic, there’s a lot of intelligence built into it. I used it for normal knife duties: opening boxes, preparing and cutting food while camping, and cutting rope. But I also carried it concealed along my waistband in places where carrying a gun was either impractical or prohibited.

It is an outstanding blade that reminds me of a treasured family heirloom that’s been carried and used and passed down through the decades. Its functionality and its inviting aesthetic make it a blade I loved to keep by my side. Small wonder Helm’s blades are so sought after.

Blade Shape Helm went with a “kitchen knife” shape for the blade. which does a better job of penetrating. “The sweeping curve of the blade is better at cutting and slicing, and this shape makes the blade more effective as an everyday carry tool,” Helm says.

Swedge The stylized swedge is made by lowering the spine just ahead of the handle. It allows purchase for the index finger and gives better dexterity for fine manipulation of the blade or a spot for leverage for your thumb to apply extra force.

Materials Helm uses 01 tool steel, a basic carbon steel, which is simple to maintain. “It has a Rockwell harness around 58, so guys in the field can sharpen it easily,” Helm says. The grips are made of G10.

Finger Choil Helm made the finger choil especially deep so that the knife is easier to hold onto while you’re wearing gloves, or when your hands are wet or bloody. It also helps ensure that your fingers won’t slip up onto the blade when stabbing.

Hammer Pattern Using a handheld grinder, Helm adds this pattern to the knife along the spine and on the butt and underside of the grip. It creates extra texture for a better grip. It’s known as a rock pattern for its resemblance to chipped flint.