A Profile of Andy Alm, a Custom Knife Maker Who Quit His Day Job

One evening this winter, while knocking back some bourbon and scotch with my friend Mitch Kezar, he pulled up a... 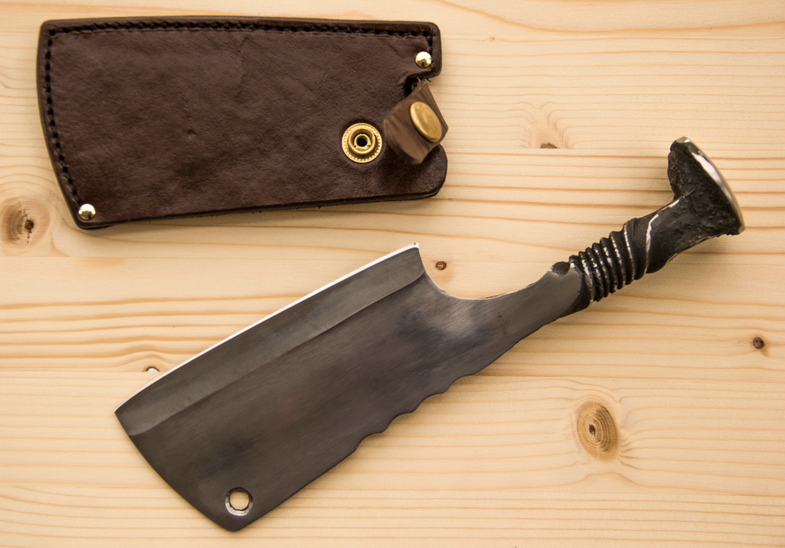 One evening this winter, while knocking back some bourbon and scotch with my friend Mitch Kezar, he pulled up a picture in his cell phone. “Oh, dude, you’ve got to see this,” he said. I’ve learned to pay attention when Kezar—a world-class outdoor photographer—makes a point of showing off any of his images. But this wasn’t one of Kezar’s shots. This image was of a kick-ass-looking meat cleaver forged from a railroad spike.

“I gotta get one of these,” Kezar said, nodding as he wet his lips with another sip from his lowball. I needed one of those cleavers, too, and I was intrigued to learn more about the bearded character who builds them.

His name is Andy Alm. He’s a 27-year-old from Allison Park, Pennsylvania. When I jumped on the phone with him for the first time, he had to let me go and call me back because he was at the post office shipping a pile of knives to eager customers. Five minutes later, my phone rang and for the next hour Alm told me his story—the entire time rustling around in his shop to continue production. Business is good, so much that he just quit his full-time job as news director at a radio network.

“People always ask me how I got into making knives,” Alm began. “I don’t really know. In high school, a couple of friends and I thought it would be a fun thing to do. I’ve learned a whole lot by watching YouTube videos.”

It seems some of the most prolific artists stumble upon their hidden talents, and once they exercise their art, admirers (and their pocketbooks) come naturally. Of course, in today’s world of hyper communication, Alm pointed to social media as a major factor in the explosion of his following.

“It basically grew through my Facebook page,” he said, his voice fading in and out as he shouldered his cell phone and continued to work. “About 90 percent of my business is direct through PayPal over Facebook or Instagram. I’m selling basically every day with customers through social media. I don’t know what I’d do without social media. I’ve got so much demand, it’s getting very difficult for me to even keep up with it at this point.”

Alm builds a variety of custom knives, but his most sought-after design uses a railroad spike as the handle. That’s what initially caught my eye, and what caused me to drop some coin on my custom cleaver.

“I’m not the first one to use a railroad spike to make a knife,” Alm explained. “It’s a pretty popular type of beginner’s project. A few guys out there are doing incredible work with them, but most of them out there are pretty crude. What I’ve done that’s revolutionary with the railroad spikes is I’m adding good steel to them. I do a forge weld with 1080 or 1095 high-carbon steel. I make other knives, too, but these spike knives are the most popular. 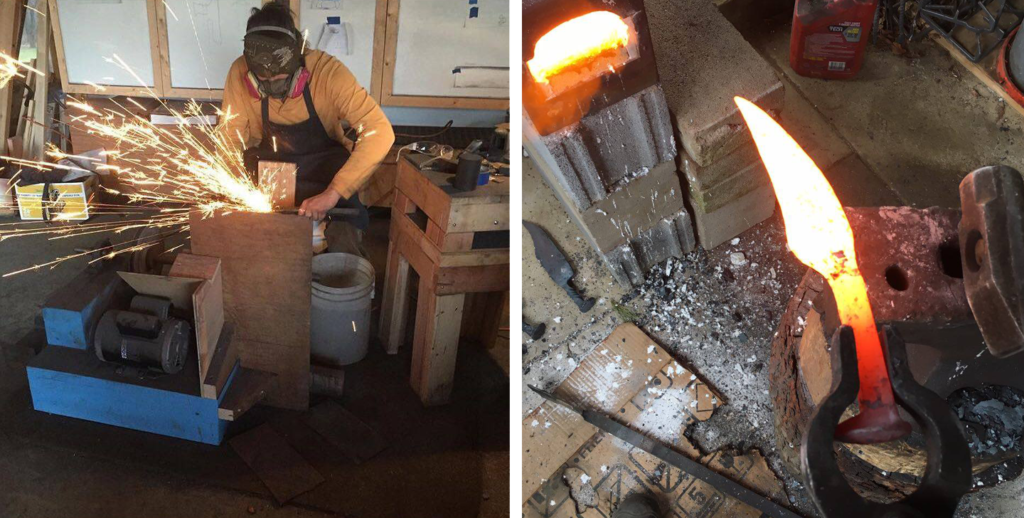 Right now, his shop is divided between his garage and an outbuilding that houses his 1.5-ton power hammer. He’s producing 20 pieces per week on average. He doesn’t like to make too many blades at once, for fear of missing details. Alm prides himself on his operation, which he’s constantly refining.

“I’m real old-school with the way I grind these blades,” he noted. “I actually grind them on stone wheels. It was the Pakistanis who opened my eyes to this. Pakistan is a third-world country [in some respects], but they make a lot of knives and they make them very quickly. I’ve tried to make it as efficient as I can make it for a one-man shop.”

“I’d be open to taking on a couple of employees at some point,” he said. “Right now I’m just pinching pennies and trying to live on what I’ve got for myself. I don’t ever see myself being a huge manufacturer, but it’d be nice to have a small shop and a few guys working in there.”

While he’s detail-oriented and doesn’t have intentions of becoming a cutlery giant, his business model still relies on producing a lot of products to turn a buck. 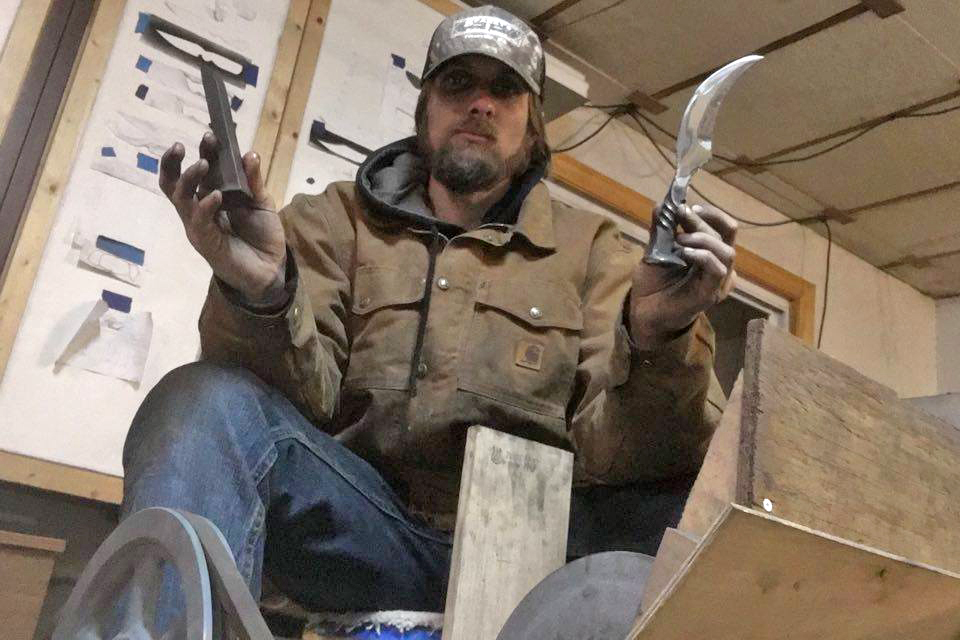 “I’m basically relying on quantity,” Alm said. “I want to make good knives that are affordable.”

Alm builds a few different styles of cleavers. His earliest design isn’t as finished; it has a heavy scale and the blade is broader. He still offers those, mainly as camp knives for cutting brush and such. He constructed mine with the kitchen in mind—it’s thinner and polished. As much as I’m tempted to put my custom cleaver on a shelf in my office, I plan on putting it to work (you’ll probably see it appear frequently in this blog).

When I asked Alm if he was nervous about quitting his career to chase his dreams, he shared a simple yet inspiring rationale.

“If I don’t do it now, I’ll probably never do it and regret it. So here I am—doing it.”