5 Most Attainable Public-Land Upland Bird Hunts in the U.S. 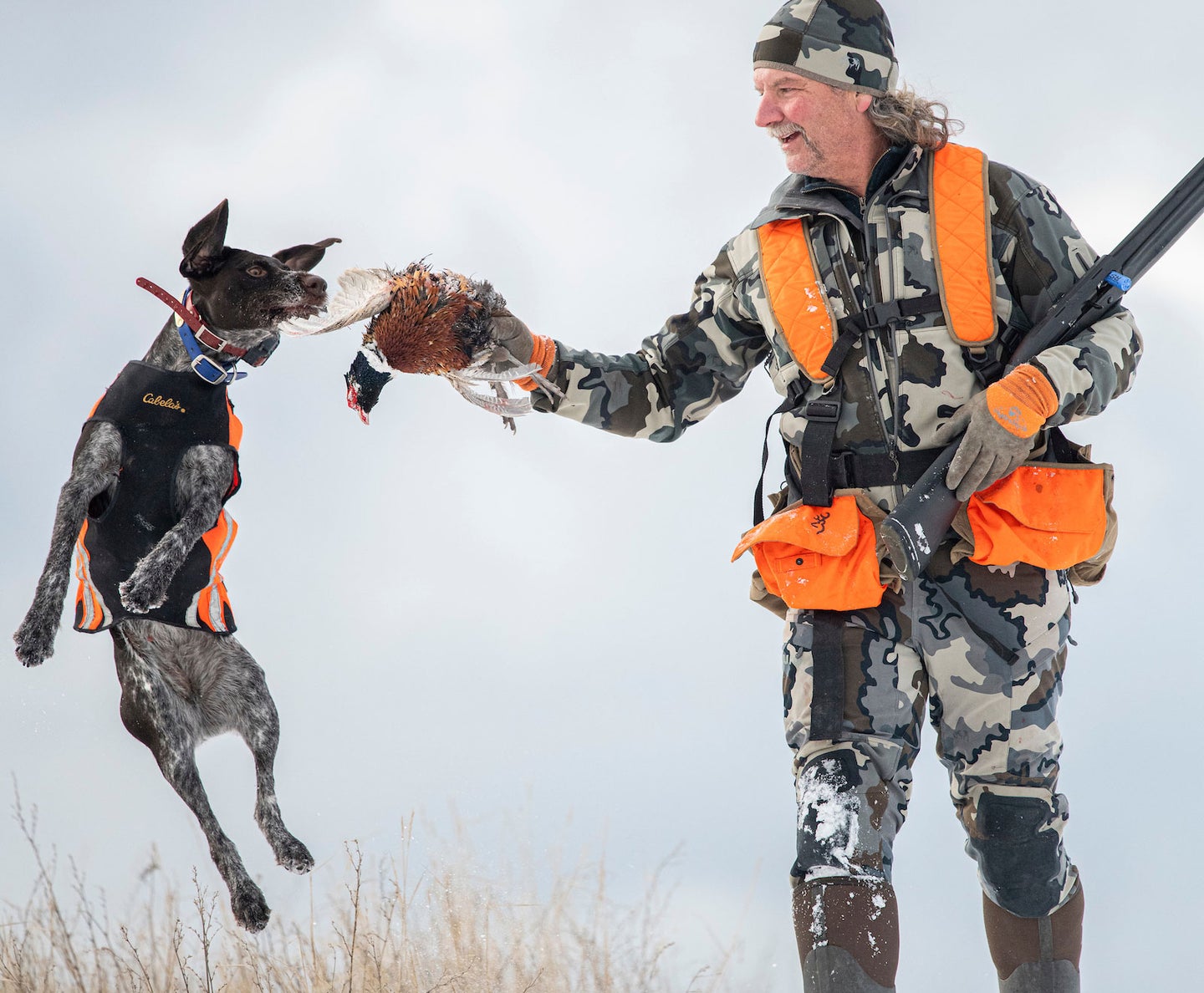 In 1998, author Joe Augustine shot his first Wisconsin woodcock pointed by his young English setter, Jacy. Over the next seven years, Augustine and his dogs hunted every North American upland bird, completing his own version of an upland “grand slam.” He later wrote a book about the experience.

Not all of us have the time or money to dedicate to a bird-hunting odyssey like Augustine did. But before you kick the bucket, there are five bucket-list upland hunts you must complete. These are not expensive excursions that soak up all your vacation time and savings. They are affordable trips most any passionate bird hunter with a good gun dog can manage.

1. Kansas and Nebraska Pheasants and Quail

Without question, a cackling rooster pheasant or covey of bobwhite quail will get a bird hunter’s heart racing. Why not have them on the same trip?

Nebraska and Kansas are ground zero for a mixed-bag hunt of two of the country’s most sought-after gamebirds, and in many parts of these states, they can be found in close proximity to one another. You’re just never entirely certain which opportunity will present itself on any given flush, and that’s half the fun. It’s also a blast to see your dogs learn how to handle these two very different species over the course of a trip.

“It didn’t matter whether I was walking large tracts of native grasslands, or making my way through a two-section area of cut corn or milo. The freedom I felt on the prairie was soulful, liberating,” said Augustine.

Both states have extensive public access hunting, including 1.2 million acres in Nebraska and 1.3 million acres in Kansas. Some of that is public land, but also each state has partnerships that open private lands to the public through Nebraska’s Open Fields and Waters program and the Walk-In Hunting Areas found in Kansas. Birds can be found almost anywhere, but roosters and bobwhites overlap most in the central third of both states. Besides opening weekend and the holidays, pressure is fairly light.

Pheasants get top billing in South Dakota, but what many don’t realize is that there is a healthy population of sharptail grouse, and huntable pockets of greater prairie chickens. Sharpies can be found most anywhere, but the greatest population densities are west of the Missouri River. Prairie chickens are found mostly in the central part of the state. The Pierre National Grassland and Lake Oahe’s 2,250 miles of shoreline and adjacent land are good bets.

These birds have roamed America’s prairies for hundreds of years, and while urban development has reduced their range, there are still ample opportunities for success in sparsely populated expanses of rolling grassland. Look for vast tracts of short to medium grasses with cornfields nearby. Early morning and late afternoon you’ll often see these birds commuting between their grassy roost sites and grain fields.

“I like it because I can almost always see my dog work, and you’re only limited by the amount of ground you and your dog are willing to cover,” says Augustine. “And because of that, there’s very little competition with other hunters.”

The season typically starts the third weekend in September, making it an ideal early hunt. It’s also a full three weeks before the orange army descends for the start of pheasant season, so you shouldn’t see too many other hunters afield. As the season progresses, birds tend to flock up more, making them difficult to flush in range. It’s worth noting that South Dakota had a record drought during the summer of 2021, which impacted upland bird habitat across much of the state. Do your research on specific areas before making the trip.

Further west of SoDak there’s an upland hunter’s paradise of multiple species and stunning scenery. If you don’t understand why Montana is called Big Sky Country, you really need to experience this hunt. While Yellowstone and the Rocky Mountains to the west get most of the press, bird hunters will do best staying east.

Whether it’s sections of wheat fields or seas of sage framed with distant mountains on the horizon, Montana’s scenery is tough to beat. Expect to do a lot of walking—the terrain can be hilly, but certainly doable for most hunters.

Montana has 31 million acres of federal and state land, as well as its public-private Block Management Program that adds another 7.1 million acres. Most years, sharptail grouse are plentiful. Hungarian partridge can provide exceptional dog work and wingshooting, since they’re more prone to hold for hunters, they rise as a covey, and can often be tracked for secondary flushes. Like South Dakota, eastern Montana suffered a brutal drought this summer. So do your research on specific areas before heading there this fall.

Sharptails and sage grouse inhabit wide swaths of grasslands and sage tracts in the eastern half of the state. Huns keep more to the edges of cut wheat fields and abandoned farmsteads, and pheasants are at home near agriculture and brushy drainages. The Missouri Breaks and the portion of the Hi-Line that stretches from Havre to the North Dakota border hold good numbers of these birds. Other than the first couple weekends of pheasant season, there is little worry of being crowded by other hunters. A late September or early October hunt is your best bet for cooler weather, but before heavy snows arrive.

Mountain grouse—including spruce grouse, blue (dusky) grouse, and ruffed grouse—make their home in the forested highlands of northwest and north-central Montana. Many hunters have found that once they make contact with these birds, they take an elevation reading on their GPS and continue hunting similar altitudes to find more.

“There’s just so much to do up here, and so many things to learn. I’ve been taking this trip for years and it never gets old,” says Augustine.

If you’re looking for something completely different from the open country of the West or Midwest ag fields, you owe it to yourself to experience a ruffed grouse hunt.

“This is what I grew up learning, and what all of my dogs have learned. To me, for a long time, this was all I knew upland hunting to be. It is challenging for both the dogs and the hunter,” said outdoor TV host Mark Peterson, who embarked on his own upland slam after reading Augustine’s book. “And there is just something magical about walking through the aspen and alders with the leaves falling.”

He’s right. A walk in the woods on a crisp October day is a kaleidoscope of bright colors, heady aromas of decomposing leaves, and thrilling sounds of dog bells jangling and grouse drumming. Bear in mind that on many walks, it’s quite possible you’ll hear the noises of ruffies without ever actually seeing them. They are incredibly crafty escape artists, and that’s why successful grouse hunts are often measured by flushes, and not by birds in the bag.

Michigan has 7.5 million acres of public land, much of it being prime grouse habitat. Most of the Upper Peninsula offers productive hunting, but places like the Huron-Manistee National Forest in the Lower Peninsula are worth trying, too. Be on the lookout for 19 different Grouse Enhanced Management Sites (GEMS), consisting of 70,000 acres of prime habitat throughout the state. Miles of trails weave through these properties, but it’s smart to hunt off the beaten path to find birds that have seen less pressure.

If you time it right—usually beginning mid-October and concluding in early November—you can pick up some woodcock as they begin their flight south. Unlike ruffed grouse, woodcock will usually hold for pointing dogs and provide ample shooting opportunities.

In December and January, set your sights on the Southwest. Southern Arizona, the area generally south of Tucson, is home to three species of quail: Gambel’s, scaled, and Mearns. While these birds are in relatively close proximity to one another, their habitats vary. Prime areas include the Coronado National Forest and the Las Cienegas National Conservation Area.

Scaled quail are at home in open desert scrub land, where they are free to run more than fly. It may take 20 minutes to get a single bird to fly after an initial contact…if you’re lucky. Gambel’s quail stay close to drainages, water holes, and other areas where there is green vegetation and insects – and the ever-present cholla cactus, which painfully clings to anything. Mearns quail are found in higher elevations, usually in and around pine oak woodlands. Hunting typically requires some climbing and side-hilling, but you’re rewarded with jaw-dropping vistas and equally good bird numbers, the further you get from other hunters.

READ NEXT: These Hunters Have Perfected the Upland Bird Hunting Road Trip

“This is all public land hunting, and if a hunter puts their time in and has a good dog there can be some great days spent in the field,” says Peterson. “Plus the December weather in Arizona really beats the weather in Michigan.”

Both Augustine and Peterson both say they were profoundly changed through their travels. They encountered new landscapes, met interesting people, and learned some lessons along the journey. Most of all, they say their trips helped unleash their dogs’ potential.

“I just think it’s freaking cool that you can turn your dogs loose just about anywhere, and eventually they’ll find birds. I never get tired of watching that,” Augustine says.