Are Duck Hunters Really Losing 1 in 5 Birds? Here’s How We Can Do Better

There’s plenty of debate around crippling rates in waterfowl hunting, but the best duck hunters agree that we can reduce those numbers and put more birds in the bag 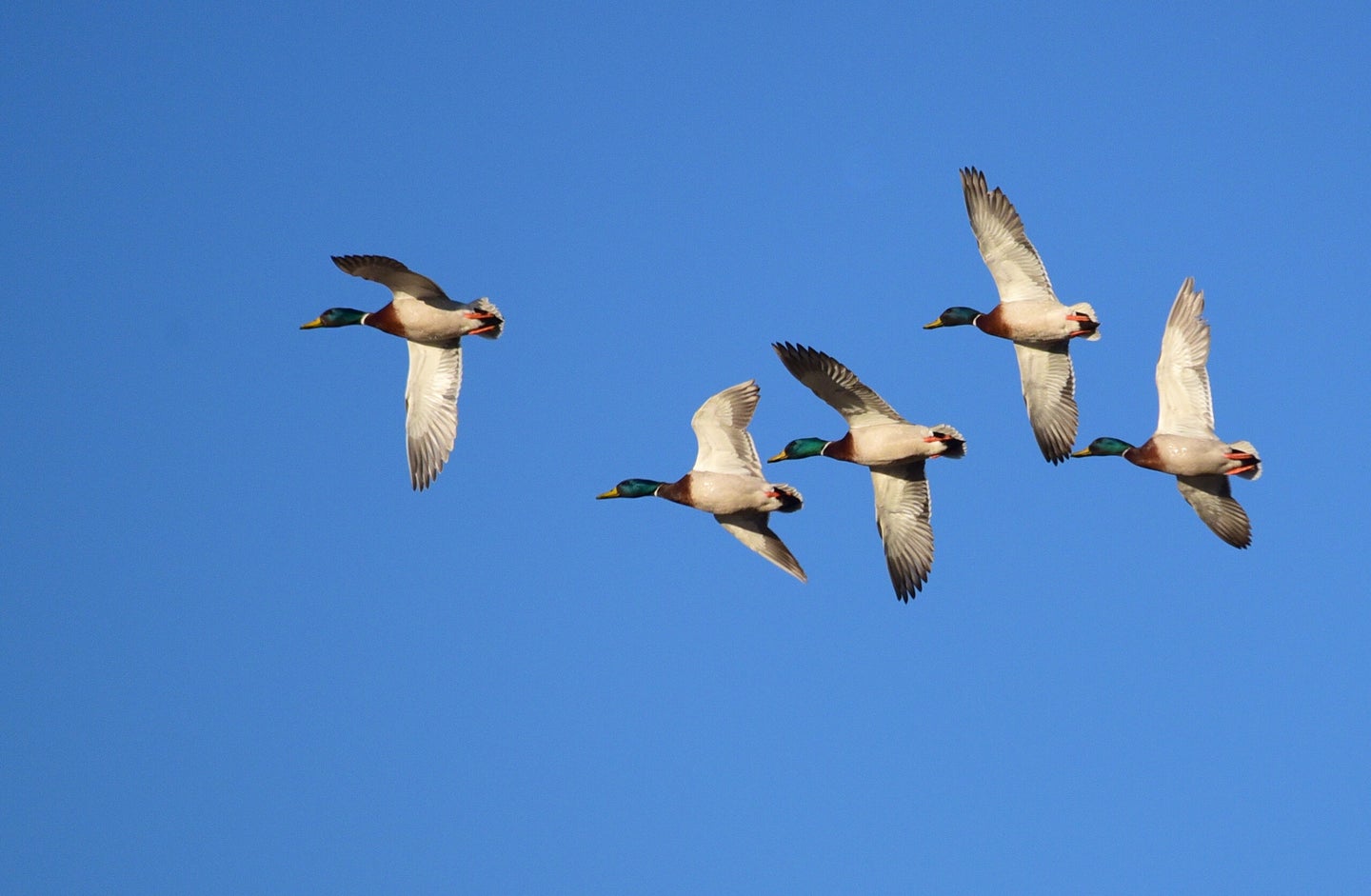 USFWS estimates that the duck crippling rate in waterfowling is 20 percent, or one out of every five ducks downed by hunters isn't recovered. Tom Koerner / USFWS
SHARE

The man behind Boss’ marketing is Lee Kjos, who’s a veteran duck hunter, a renowned outdoor photographer, and a buddy of mine. Kjos was claiming that somewhere between 3 million and 3.4 million birds are shot by waterfowl hunters, but not recovered. My first thoughts were: 1) These numbers can’t be correct; 2) Why in the hell is he talking about this?

It turns out Kjos’ numbers are probably close. He’s read a handful of studies and talked to biologists (mostly off the record) from all across the country and says that the consensus is about a 30 percent waterfowl crippling rate. In other words, three out of every 10 ducks that are downed by hunters are not recovered. If you apply that rate to the 9.72 million ducks taken by hunters in the 2019-2020 season, you end up with 2.92 million lost ducks. Add lost geese into the equation, and you’re well over Kjos’ estimate.

I dug into the research and found conflicting results. A 2001 report conducted for the Humane Society of the United States concluded that the waterfowl crippling rate was between 20 and 40 percent. HSUS is a hardline anti-hunting organization, however, so you would be wise to be skeptical about their numbers. A survey report from South Dakota asked wildlife professionals about their own waterfowl hunting experiences and turned up a crippling rate of 10 percent. The U.S. Fish and Wildlife Service wrote in its 2013 Environmental Impact Statement on migratory bird regulations that “the estimate of .20 [20 percent] used in many population models probably is a reasonable estimate of crippling rate for most North American migratory game bird species.”

The chart they produced shows a decline in crippling rates in recent years, unfortunately that decline is likely due to changes in HIP survey data (not actual changes in the field), according to the report.

All of these reports acknowledge that estimating crippling rates is an imperfect science because it relies either on hunter surveys (and hunters sometimes skew the numbers or don’t remember their hunts perfectly) or it relies on field observers, who can’t always see everything that happens during a hunt.

But even if these numbers are close to accurate, we duck hunters are losing way, way too many birds. And that’s why Kjos is bringing this conversation to the forefront with Boss—because he knows that we can do better. One of Kjos’ good buddies—Tom Dokken, the godfather of retriever training in America—thinks that we can do better too. Here’s how. —A.R.

Shoot the Best Pattern with Your Gun, Load, and Choke

It starts with picking a deadlier shotshell, Kjos says. Which, of course he does—he’s helping run an ammunition company that makes premium copper plated bismuth loads. Boss pellets have a density of 9.6 g/cc, which is 23 percent denser than steel (7.8 g/cc). For reference, lead shot has a density of about 11.1 g/cc. TSS, which is more expensive than copper plated bismuth, is also double the density of bismuth at 18.1 g/cc.

But most shotshell companies are making a denser-than-steel, non-toxic loads these days. Federal is loading TSS blended loads and bismuth, Browning is offering a bismuth load, so is Rio. Hevi-Shot offers a variety of denser-than-steel options that are tungsten-based and Kent has Tungsten-Matrix. Plus, like Boss, there are more direct-to-consumer custom shotshell companies that are making premium loads with bismuth or TSS. Apex Ammunition, for example became a favorite of turkey hunters with its TSS loads but now has a cult following of diehard duck hunters too.

The key to a more deadly shot string is pellet density and pattern density, Kjos says. Denser pellet material like bismuth or TSS retains more energy down range. Plus, since the material is denser you can shoot smaller shot sizes, which gives you more pellets per shell. For example, Kjos promotes shooting No. 5 Boss for ducks and geese, as opposed to the steel standard of 2s or BBs. This is because the smaller, denser pellets carry just as much energy as the larger, less dense pellets. And because they’re smaller you’ll have far more pellets packed into a load, which means a denser pattern and more pellets hitting the bird (if your shotgun is choked properly). Back before there was a ban on lead shells for waterfowl hunting, the standard was 12-gauge, 3-inch No. 6 lead shells for pretty much everything, Kjos says. Modern bismuth loads work off this same concept.

“I won’t argue that steel doesn’t work inside 30 yards,” Kjos says, noting that it’s not as effective at killing beyond that range for most hunters. “We all know this.”

But being a better duck killer goes way beyond just picking a high-end (and expensive) load. The most important step is pattering that load with your gun and choke at realistic hunting ranges.

“You’ve got to look yourself in the mirror and ask: How do I hunt?’” Kjos says. “Because if you’re shooting at ducks over the decoys at 20 to 40 yards, you’re going to need a different setup than if you’re pass shooting at 50 and 60 yards.”

How to Pattern Your Duck Gun

Here’s how to pattern a duck gun, according to Kjos:

Once you’ve done this, take a hard look at the pattern you’ve printed. The pellet impacts should evenly cover the circle. Imagine a duck or goose superimposed on that circle. Are there multiple pellets making body shots?

If the pattern looks too tight, go with a more open choke size. If it’s too sparse, go with a tighter choke. If the pattern looks good, back up 10 yards and shoot a new target, evaluating the pattern the same way. When your gun, choke, and load combination is no longer printing full, even patterns inside the 30-inch circle, you’ve reached your maximum effective range. Now it’s simply up to you to have the discipline to pass on farther shots.

Now that you’ve got your gun dialed in, don’t change it. Just practice shooting before the season, then take good shots within your range and pass on the bad ones. The number of birds you wound and lose will go down.

“You’ll get good at killing ducks,” Kjos says. “You won’t want to change anything.” —A.R.

The first time Tom Dokken hunted ducks with a retriever, he and his buddy were posted up along a small creek in central Minnesota. A flock of bluewing teal came winging down the creek, and the two high schoolers dropped three ducks—right into a thick stand of cane on the opposite bank.

“I was thinking to myself, Well, there’s just no way,” Dokken says. “We’re just not going to find these things.”

But his buddy walked his Lab across the creek and sent the dog into the cane. They returned with all three teal.

“It was just an eye opener for what a dog could do,” Dokken says. “Over the years it’s just [become] apparent, if you don’t have a dog—no matter if you’re duck hunting, pheasant hunting, whatever it is—you’re kind of handicapped. Especially on retrieving stuff that maybe you can’t find.”

Since that hunt in the late 1960s, Dokken estimates he’s trained some 10,000 bird dogs, both personally and through the kennel he owns and operates in Minnesota. Over those five decades, he’s learned a critical rule for teaching retrievers to find dead and downed ducks: The dog must be successful. Unsuccessful dogs quickly learn to give up.

Dokken teaches his dogs to “hunt dead.” He’ll start by taking a dead pigeon, say, and placing it in foot high grass, then sending the dog in after it. The dog isn’t exactly sure where the bird is, but a quick search with her good nose turns up the bird. As the dog gets more experience hunting dead, the drills become more challenging.

And while many duck dogs will hunt along the bank or in a stand of river cane for downed birds, fewer hunters teach their retrievers to perform a similar search on water. To train for this, Dokken has developed a diving version of his Deadfowl Trainer, which attaches to a fishing rod. He’ll skim it across the water and dunk it beneath the surface to simulate a wounded duck making its escape.

In real hunting situations like this, hunters must continue keep their dog’s success in mind. Help your dog be successful by taking smart shots on the wing and preventing birds from diving in the first place—and you’ll reduce your crippling rate in the process. Here’s how Dokken thinks about hunting with his own dog:

Despite your best hunting and your dog’s best efforts, there will be times when your dog just can’t find a duck. Even then, Dokken’s golden rule still applies.

“Worst case scenario, maybe you’ve shot a couple of ducks and you’re just not going to come up with this one,” says Dokken. “I’d have a duck with me, maybe in my game bag, and when the dog’s not looking, I’d throw it off to the side and let him come in and find something. They have to have success, especially the youngsters.”

My own young pup isn’t a whiner. After just one session with Dokken, who reeled that diving dummy across a choppy lake, my 7-month-old Lab was whining frantically as he watched his mark swimming away. He wanted that retrieve bad. And he got it in the end, because Dokken made sure he would. My dog is learning that if he keeps hunting—if he swims faster and sticks with it—he’ll eventually turn up a bird. And I’m going to do everything I can as a hunter to keep it that way. —N.K.

The last element of decreasing crippling rates is a trickier one—we’ve got to make a cultural change in duck hunting. That means getting away from obsessing over filling limits or making big piles for Instagram photos. We’ve got to focus on the craft of waterfowl hunting. Let’s put more emphasis on diligent scouting, decoying and calling birds, and making close, lethal shots.

Read Next: Duck Hunters Should Expect to See Older and Fewer Ducks This Fall

So how about this, let’s start counting how many birds we can bag without losing one. I’m not arguing we need to become stogy prudes who only shoot ducks right over the decoys. Earlier this season, my buddies and I hunted the Minnesota early-teal season opener and shot 1-bird shy of four limits without losing one. We were pass shooting from a levee—we didn’t set a single decoy. But we took careful shots, marked our birds, and I worked my dog hard.

Over the course of the weekend our group killed a total of 40 teal. We lost two. I can live with those numbers, but next year I’m going to try to make it zero. —A.R.