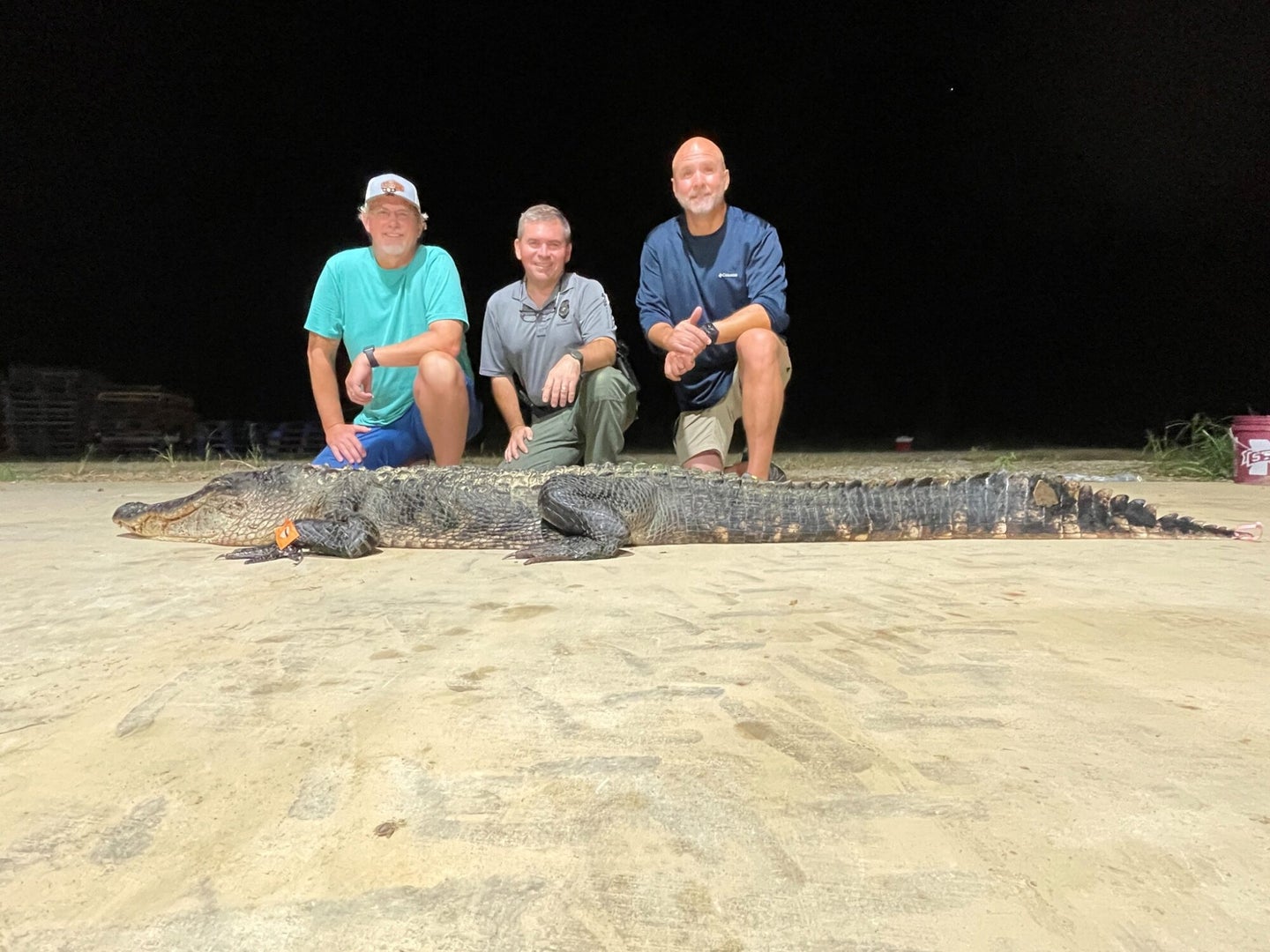 Jim and Richie Denson of Mississippi captured the gator on the Pearl River near Jackson. Mississippi Department of Wildlife, Fisheries, and Parks / Facebook
SHARE

On June 11, 2009, “Yellow 410” got her name. The female alligator was captured, tagged, and released back into the wild by the Mississippi Department of Wildlife, Fisheries, and Parks. They had no clue how old she was at the time, nor how much she’d grow or move around in the years that followed. She disappeared despite many biologist and hunter attempts at finding her.

Thirteen years later on Aug. 28, two first-time alligator hunters from Madison, Mississippi harvested Yellow 410 on the Pearl River above the Ross Barnett Reservoir northeast of Jackson. She measured 10 feet 2 inches long, which broke the previous state record of 10 feet flat. When hunters Jim and Richie Denson reported their catch to MDWFP, it turned out not much had changed since 2009.

“At that time, the alligator also measured exactly 10 feet 2 inches and was captured within 100 yards of where the Densons killed the record alligator,” Ricky Flynt, Alligator Program Coordinator for MDWFP, said in a press release.

Alligators don’t tend to move around very much over the course of their lifetime unless habitat needs demand they do so, and according to Jim Denson, a rainy summer had created standing water in areas where there usually isn’t any. The brothers harvested their gator in such a spot after a friend spotted it hanging around a temporary waterbody.

As for what the record gator’s age was, it’s hard to tell. Most alligators don’t reach 6 feet in length until they’re about 10 to 12 years old. If she was fully grown 13 years ago, that means she must have been at least 25. But MDWFP has a much heftier estimate.

“We have learned that females typically have much slower growth rates (less than two inches per year) while males typically grow faster and can grow as much as 8-12 inches in one year. We also know growth of individuals can vary greatly from one year to the next. Given that knowledge and what we have learned from tagged alligators in the wild, it is entirely possible that this record alligator could easily be as much as 75-100 years old,” Flynt said. “This is definitely a world class alligator specimen.”

Like with any good record-breaking catch the Densons had a story to tell. According to Jim Denson’s Facebook post, “She broke a heavy fishing rod and the snare pole.”

Denson says that the rod, on loan from his brother-in-law, lost a few lower eyes and spent a decent amount of time in the water before they retrieved it. He also fumbled a bit with the snare before he was able to successfully tighten it, but not before she clamped down on the pole it was attached to. Despite the chaos and Richie almost losing a finger to the hand line, they completed the harvest and now look forward to getting the meat back from the butcher.

“We were as prepared as novices could be,” Jim told Outdoor Life. “Mike Tyson says ‘Everyone has a plan until you get punched in the nose.’ Well, it works that way when you’re battling a 10-foot alligator.”