“Ahhhh, man. That ain’t good.” This was Bo Dylak’s reaction to his name being called over the school intercom, with... 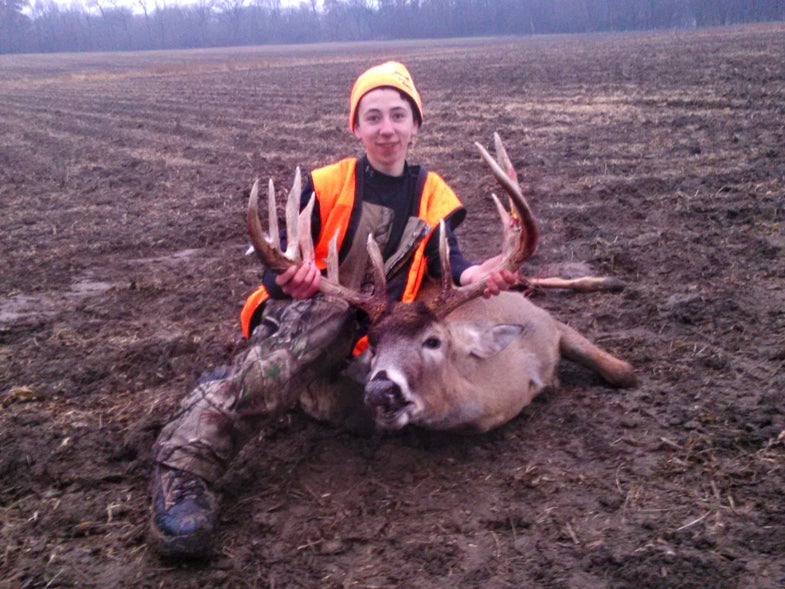 This was Bo Dylak’s reaction to his name being called over the school intercom, with instructions to come to the principal’s office the Tuesday before Thanksgiving.

“I was asking myself, ‘What’d I do now?’” the 15-year-old explained. “Turns out [the principal], and then the Safety Officer, just wanted to talk to me about my buck.”

That buck was a bruiser and one any hunter would be interested in hearing about.

Bo took the 300-plus pound whitetail on the Saturday before Thanksgiving on the farm in Illinois’s Boone County he had “hunted” since he was four years old. Bo’s father, David Dylak, reminisced that hunting has always played a big part of his life, and he was eager to share it with his family.

“I guess I’ve been taking Bo to the deer stand with me since he could walk,” Dylak recalled. These first experiences got Bo more and more interested in hunting, and it wasn’t long before he was doing more than just sitting in a blind.

In fact, it was meat that Bo was after when he took the type of deer that makes principals envious.

“I had my choice of two blinds that day. One’s the buck stand. The other’s a numbers stand, where we see a lot of deer. Since we were after meat, I took the numbers stand,” Bo said.

Bo’s younger sister and father set up in the other blind. Bo didn’t see anything that morning, but his luck changed when he returned at 2 p.m.

“I was sitting in the blind playing games on my phone, and I look up and I see a doe. And then I saw something chasing the doe.”

Bo knew the big buck on the far end of the picked cornfield was big, but he also knew it was a long shot—especially for his 20 gauge. “I was taught by my dad not to take a shot unless you knew you could make it and I felt pretty sure I could make it.”

Bo’s first shot, however, missed. “The buck looked up at the shot but he couldn’t tell where it came from so he kept after the doe. I racked another shell in and fired.” This time, the 164-yard shot connected, and the deer took off for the woods.

“My dad texted, ‘Do we have meat?’ and I answered that I’d just shot a pretty big buck.” 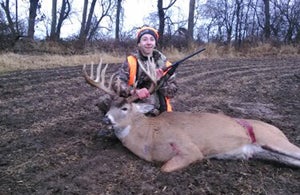 Bo’s father instructed his son to stay calm, make mental notes of how far the deer was, where it was shot, and the direction in which it ran. Dylak arrived to find Bo in the field on top of a blood trail. They followed it into the woods.

“Bo immediately says, ‘There he is,’” Dylak said. “But all I see is the [standing] deer’s white tail. Then the sun caught his antlers and I saw how big he was.”

Bo didn’t give his father time to admire the buck. With the deer still standing, Bo squeezed the trigger. “My dad said I hit about 50 feet in front of him, so I fired again and that time he went down.”

Bo and Dylak were flabbergasted at the size of the buck upon approach. “I’ve hunted this property for some 25 years,” Dylak said. “And I’ve never seen anything that big on the place before.”

The deer was so big that Bo’s 13-year-old sister began chiding the hunters when she arrived. “She was giving us a hard time while we were dragging it out,” Bo laughs. “But then when we got outta the way and she saw how big it was she said, ‘I’m sorry I was screwing with y’all.’” 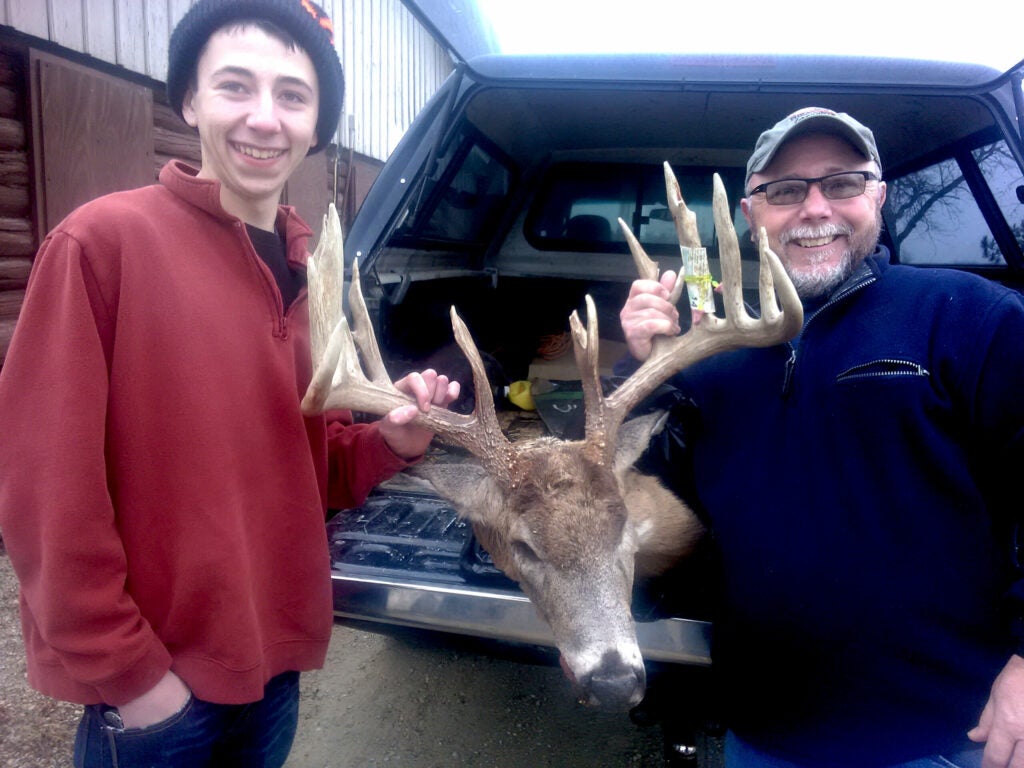 The buck green scored 201 5/8 inches. The only typical Boone County buck on the record books scored 170 2/8 inches, so the Dylaks are looking at a county record, and potentially ranking statewide. The largest buck taken in the state measured 204 4/8 inches, and was taken in Peoria County in 1965.

Representatives of the Illinois Department of Natural Resources that inspected the deer aged it around three and a half years old. Others, including the thousands that have seen the buck on social media, put it at five and a half to six years of age. Bo believes the latter as he says its meat was pretty tough. Bo also says that although he doubts he’ll ever get anything bigger than his 200-class deer, he looks forward to a lifetime of trying.

Bo’s buck is eligible for our Deer of the Year program, and so is yours. Upload a photo of your own 2014/2015 buck for a chance to win great gear from Gerber and land your deer on the cover of Outdoor Life magazine.

Can’t get enough of big bucks? Watch these rutting bucks and learn about their behavior during the best weeks of the year. Check it out here.