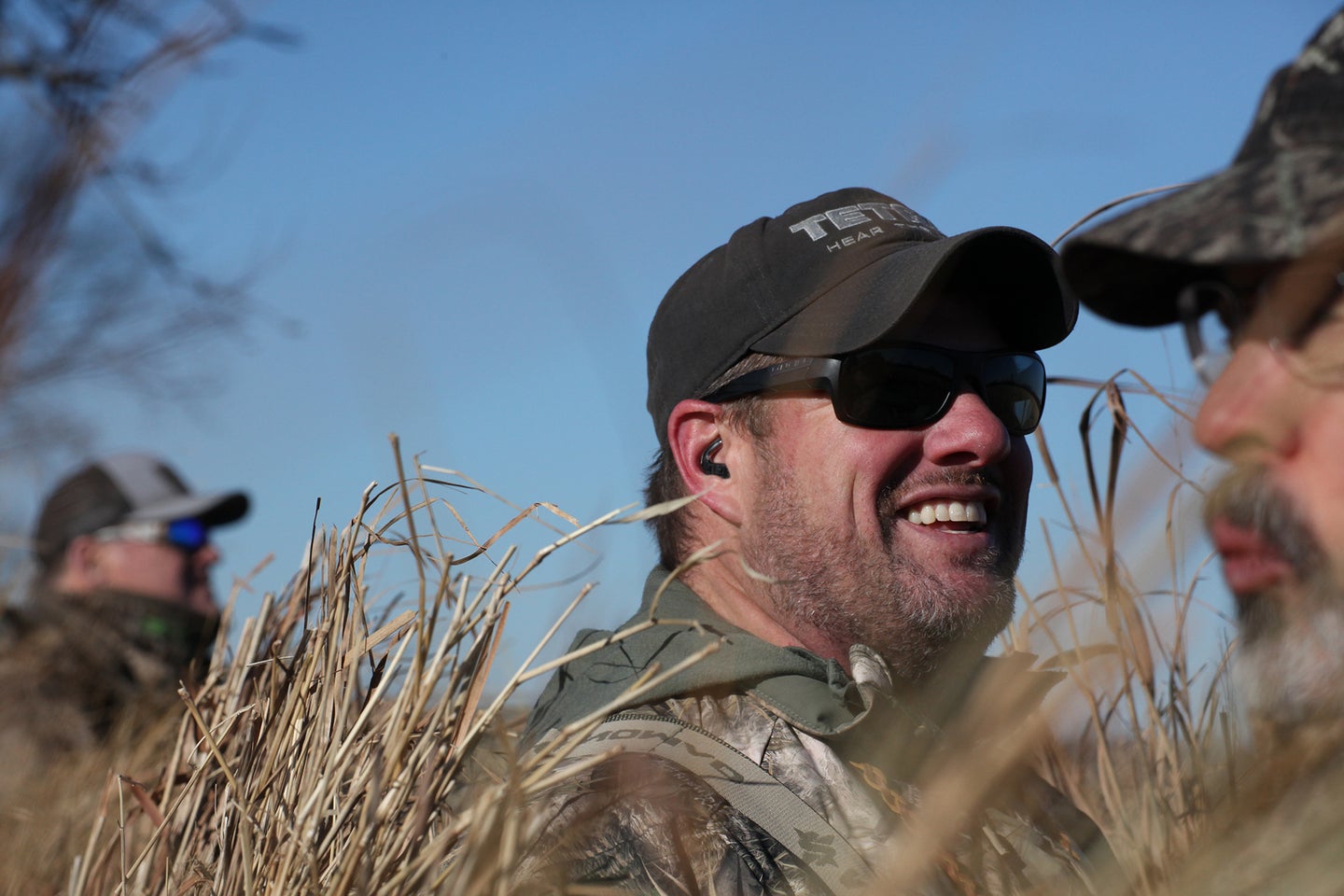 Bill Dickinson, founder of TETRA, wears a pair of his company’s Waterfowl AlphaShields during a duck hunt. Andrew McKean

IT STARTS WITH a blithe attitude about shooting without ear protection. Even those hunters who wouldn’t think of shooting at a rifle or shotgun range without muffs or foam ear plugs routinely hunt without any hearing protection. The impact—of days in a duck blind or weeks over your pointer—is cumulative, and leads to what is sometimes called the “NRA salute,” the tendency for older hunters to cup their hand behind their ears in order to hear better.

So the news that some hearing aids will soon be available over the counter in America, without a  prescription or expensive fitting at an audiologist, should allow hunters to finally hear their spouse, their boss, or a distant gobbler. Right?

Theoretically, yes. Practically, maybe not so much.

Hear Gobbles, Save Your Brain

The ruling from the federal Food and Drug Administration will likely trigger a burgeoning market for these less expensive devices for consumers with mild to moderate hearing impairment. But that doesn’t mean that older hunters, whose lifetimes behind guns have deteriorated their hearing more profoundly than the general population, will be part of this rush on hearing aids.

That’s the first bit of downbeat news. The second bummer is that, in order for younger hunters to avail themselves of this opportunity to get cheaper, more accessible hearing devices, they have to know what’s at risk if they don’t. It’s not just the inability to hear a keening bugle on the next ridge or the low-frequency moan of an incoming goose. It’s their mental health later in life, says Bill Dickinson, a trained audiologist.

Dickinson is the founder of TETRA Hearing, a “hearing enhancement” company that caters specifically to hunters. He says the biggest underreported aspect of the FDA’s announcement is that saving your hearing can help you avoid late-life dementia.

Dickinson spent the balance of his career in the traditional hearing-aid industry. But he’s also a lifelong hunter who wanted to bring his knowledge of hearing—both the protection of it and the enhancement of it—to the field. Hence, TETRA, which offers online hearing testing and consultation, plus custom products that can amplify certain sounds while canceling the worst brain-busting bangs.

But he says recovering certain frequencies is only part of the reason to protect your ears. The larger reason is that hearing loss is one of the primary predictors for Alzheimer’s and dementia.

If that surprises you, consider what happens during the course of a hunter’s lifetime, maybe even your own. Even as our community has become more vigilant about wearing hearing protection at the range, most hunters don’t protect their ears while hunting. Taking a single shot without ear pro during deer season sounds harmless enough. But slap a muzzle brake on your deer rifle and shoot a couple deer a year for two decades, throw in a few limits of doves and squirrels in the early season and one or two turkey hunts in the spring, and your hearing is going to take a hit.

As hearing loss becomes more acute, hunters strain to pick up conversations in crowded rooms, or they hyper-focus their attention so they can hear their spouse or friends. This mental effort to simply hear and follow simple conversations is exhausting.

But unless they get hearing aids, many of these hunters stop trying to remain engaged in the sonic world. They start to avoid places where auditory comprehension will be problematic, staying away from social events and cacophonic places. That starts a slide into isolation. And, as neurologists insist, older people who don’t regularly exercise their brains start to lose cognitive function. Eventually that becomes clinically diagnosed as dementia or even Alzheimer’s.

An Ounce of Prevention

Dickinson insists that all this is avoidable if hunters stop that cycle at its point of origin: the sonic damage of gunshots.

“Let’s quit messing up our ears so early in life, and along our lifetime,” says Dickinson. “One of the ways we mess up our ears is by pulling triggers. But for hunters, this is a problem. Hunters need to hear [before, during, and after those trigger pulls], so wearing sound-blocking devices don’t work.”

That’s why he helped develop TETRA ear protection: Dickinson wanted to give hunters a normal, natural hearing experience that can even amplify some of the important frequencies of their particular game (TETRA offers turkey, deer, elk, waterfowl, and combo models) but fully protect your ears during your trigger pull. Or your buddy beside you in the blind.

It’s never too late to address hearing loss, but Dickinson says that hunters who protect their ears at a younger age have an advantage in this new FDA ruling. The best way to improve your hearing, says Dickinson, is to protect it before it degrades. But “hearing aids” like TETRA are dismissed as artifacts of aging. They’re not cool for younger consumers.

“We have to make clear the connection between hearing loss in your 30s, 40s, and 50s, that it makes you between four and eight times more likely to develop Alzheimer’s and dementia in your 60s. We have to elevate hearing loss as a national health care concern [instead of just an issue for geriatrics].”

So. What does that leave us with? The first takeaway is that younger hunters can have it both ways, an enhanced sonic experience with the amplification of certain critical frequencies, and also noise cancellation when the firing pin drops. The second is that, instead of a $6,000 financial commitment (rarely covered by standard insurance) hunters can get their hands on hearing enhancement and protection for well under $1,000—before they lose their hearing. And the third is that hearing “aids” don’t have to carry a Social Security stigma.

“The hearing industry stresses what you can’t hear, how broken you are, how unnormal you are,” says Dickinson. “I’d rather talk about what you’re missing, and what you have lost. That’s why we tune our devices to what you want to hear, whether it’s turkeys gobbling or ducks calling. It’s more of a novel approach. I’m not going to show you that you’re 62 percent broken, I’ll show you what frequency you need in order to hear the sound that’s important to you. Whether it’s a gobble or thunder.”

Dickinson says one way to get younger hunters to protect their hearing before they lose it is to decrease cultural stigmas around hearing loss.

“Even though we are a hearing protection company, we’re trying to help you hear the fun things in the wild,” says Dickinson. “That requires changing our view of hearing devices. We now have 25-year-olds wearing designer glasses frames with clear plastic lenses because they think that those glasses look sexy. I want to create a world where a little wire in your ear is sexy because it makes you hear more than anybody else.”

But forget sexy. One of the most insidious parts of hearing loss is that hunters forget what they used to be able to hear because the hearing loss is so gradual. Imagine being able to hear distant gobbles during turkey season, or a buck grunt in the woods behind you, long after you thought you’d lost the chance.